You may never have heard about mucositis, but for those going through cancer treatment, this common side effect makes an already challenging situation that much worse.

Mucositis tends to attack parts of the digestive tract, most often the mouth, creating painful ulcers and lesions that cannot be treated with antibiotics.

"Most patients who suffer from mucositis will call it their No. 1 complaint," said Dr. Anurag Singh, professor of oncology and director of radiation research at Roswell Park Comprehensive Cancer Center.

Numbing mouthwash and prescription opioids generally are used to treat the condition – a regimen that provides only temporary relief and raises the risk of a painkilling addiction on top of a cancer fight.

It’s why Singh and several other researchers in the region aim to bring a better approach to treatment in the form of lasers.

A $1.5 million federal grant will be used in coming months to determine how photobiomodulation (PBM) therapy can be used to heal – and help prevent – mucositis in a safer, more effective way.

Researchers at Roswell Park and the University at Buffalo make up one of five teams that hope to gain approval of the treatment for use across the United States this year.

"This is a quality of life issue that impacts things we take for granted,” said Dr. Mukund Seshadri, chair of Oral Oncology at Roswell Park who also is part of the effort. “Eating, swallowing, talking all become compromised. It's painful, so anything we can do is helpful."

The impact promises to be widespread. The leading researchers on the Buffalo end of the project estimated that mucositis strikes about half of all patients who get chemotherapy, almost all patients who receive head and neck radiation and chemo, and most of those who get stem cell treatments, including bone marrow transplants.

"The opportunity here is for Roswell Park to be offering state-of-the-art cancer support treatment," said Dr. Praveen Arany, the assistant professor in the UB School of Dental Medicine who is leading the research.

Lasers have grown steadily in medical circles since their power was discovered in the 1960s.

The variety and applications vary. At high intensity, they can cut precisely, and seal a wound as they go. They have been used for decades for tumor and lesion removal across a variety of specialties, including dentistry, as well as in eye surgery.

Low-intensity laser treatment was shown to stimulate healing in animals and for many years known mostly for promoting hair growth in humans, Arany said. Roswell Park helped expand that perception. The cancer center was the birthplace of photodynamic therapy (PDT), first used in 1975 during preclinical models by Dr. Thomas Dougherty, who held a Ph.D. in physical organic chemistry.

Dougherty, who died last October at age 85, suspected that combining laser light with a nontoxic, light-sensitive drug could help kill cancer cells, though several doctors assured him at the time it wouldn’t work. He went on to launch, and lead, the Roswell Park Photodynamic Therapy Center.

Arany, while a student in dental school in his native India, also was skeptical that laser light could aid in cancer treatment. His master’s thesis in 1999 focused on the concept. He has since made it his life’s work. His advanced training continued at Harvard University. He landed his first full-time job in the field in 2012, at the National Institutes of Health, and joined the UB faculty more than three years ago to continue his research.

"The scientific community here and in Rochester has always been very strong with light-based technologies," he said. 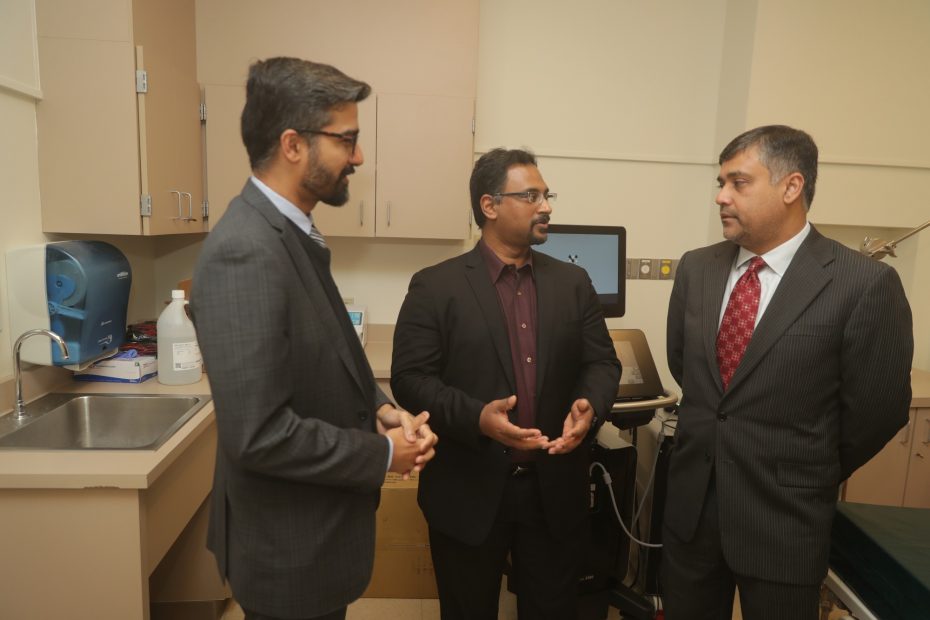 Among those leading the national effort to find a more effective way to treat ulcers and lesions in the digestive tract that often form during cancer treatment, without resorting to opioids, are, from left, Drs. Mukund Seshadri, professor and chair of oral oncology at Roswell Park Comprehensive Cancer Center; Praveen Arany, assistant professor in the University at Buffalo School of Dental Medicine; and Anurag Singh, professor of oncology and director of radiation research at Roswell Park, and professor of medicine in the UB Jacobs School of Medicine and Biomedical Sciences. Arany is president of the World Association of Laser Therapy. (John Hickey/Buffalo News)

Singh suggested one consider how water can be manipulated when thinking about lasers. If concentrated at high pressure, it can cut through a surface.

The PBM cancer treatment process is more like sprinkling a garden with a gentle mist.

It’s why the technology seemed unbelievable at first.

“How can you shine light on people and get them to heal better? That's how I started doing my research, as a nonbeliever," Arany said.

PBM research has focused on how the treatment works and, in more recent years, how it can be delivered most effectively.

The leading theory of how it works was developed at Roswell Park and involves a protein that stimulates cell growth and healing, called TGF-beta1, responsible for the human perception of pain.

“This molecule, when turned on by light, stimulates the healing process,” Arany said. “We have shown that, in the right context, it can stimulate stem cells to different cell types and promote tissue regeneration. In other studies, we have found that this light treatment can modulate inflammation and reduce pain.”

Other researchers suspect the laser treatment creates an anesthetic effect by temporarily preventing nerve transmission, or somehow acts in another way at the cellular level.

Regardless, Arany said, "researchers uncovered a molecular pathway that involves a growth factor that can be directly activated with this treatment. … A lot of people think only plants can use sunlight to improve their health, but there are biological and medical reasons for why sunlight is good for us. This is one of those processes, but less well appreciated." 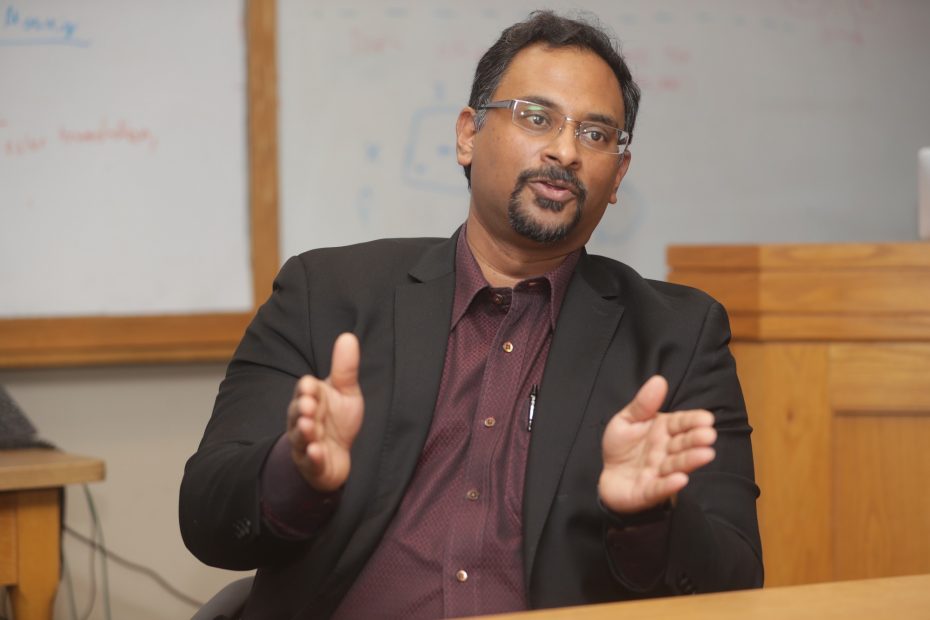 Photobiomodulation (PMB) therapy likely has wider applications than easing the pain of mucositis, and helping heal the condition, but the treatment also must be refined, says Dr. Praveen Arany. (John Hickey/Buffalo News)

PBM light therapy remains unavailable in the U.S., but for a decade or more has been used in other countries. Brazil led the way, Arany said, and doctors there generated lots of evidence that shows – regardless of why it works – that it does.

That is why the Multinational Association of Supportive Care in Cancer (MASCC) – an international group dedicated to research and education of cancer in all aspects – recommended last year that the therapy be used routinely for treating cancer-related mucositis.

Arany, and other researchers at UB, Roswell Park and across the country, are tasked with finding out how it works best – and most safely – as they also work toward federal approval, and insurance coverage, for the laser procedure in the U.S.

Leading researchers believe that will be accomplished sometime this year. Arany – president of the World Association of Laser Therapy – appeared before a U.S. Senate subcommittee on the matter last fall and said that leaders in the health, government and insurance fields are working together.

Meanwhile, Arany and fellow researchers in the region are leading the effort to help create laser devices and the medical protocol for the best patient outcomes.

“The research space is to understand how we can do better," Seshadri said. “In cancer care, ‘precision medicine’ is becoming the standard. It's not giving every patient the same thing, but to customize, and precisely deliver. We would have to adapt that paradigm to PBM."

"The reality is that whenever you start doing something, you have to measure it," added Singh, the Roswell research director, who also is a professor of medicine in the UB Jacobs School of Medicine and Biomedical Sciences. "We have a variety of ways right now of measuring mucositis ... and how often you're using opioids. Now the questions become, 'Do you use Device A?' 'Do you use Device B.' 'Do you use technique A, technique B?' 'Should the machine be on for three minutes or five minutes, or 30 seconds or 90 seconds?' 'Should it be shined on six spots versus three?' So you can see it going in a variety of ways."

State and federal safety limits on exposure from different kinds of lasers, also need to be considered, Seshadri said, adding, "The ones that have been used for medical applications have been proven time and again as safe."

The work on PBM is well ahead of clinical trials that take place in medical research. There already have been 19 randomized clinical studies across the globe that demonstrate its effectiveness, so impending studies at Roswell Park and other parts of the U.S. will not need to withhold treatment for a control group, Arany said. At this point, he said, those already using the light therapy are not seeing side effects.

Not only that, the current opioid treatment leaves much to be desired.

“Now your mouth still looks terrible but you feel great," he said. “The disease process is there, the patient still has to deal with it, so don't you want to deal with the underlying issue?”

Mucositis generally disappears after chemotherapy and other cancer treatments end. The goal of PBM is to reduce pain, start healing the condition more quickly during treatment, and help cancer patients set up for better health in the future. Researchers also will look at whether starting PBM before cancer treatment can help prevent mucositis from forming.

Meanwhile, clinical studies already are underway in UB's dental school to see if the technology can be used to promote dental implant infection healing, and in the UB medical school learn if it can help treat symptoms of concussion. Work also is in the early phase to develop a light-emitting pill to one day treat mucositis deeper in the digestive tract.

"That's cutting-edge research," Arany said. “The emphasis now is to help the body heal itself.”