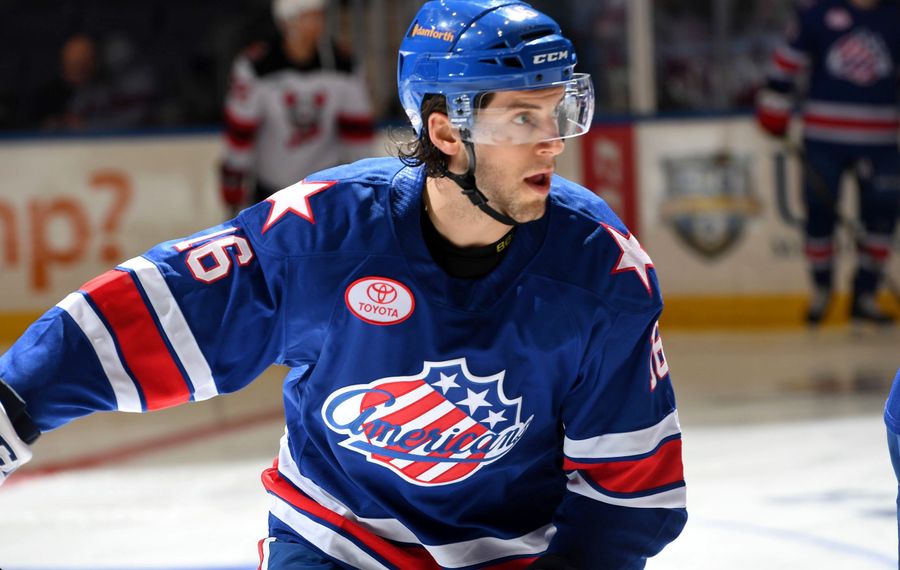 ROCHESTER – As much as Americans newcomer Taylor Leier enjoyed sticking with the Philadelphia Flyers for a full season, he only played in 39 games last season.

After earning regular action early, Leier, 24, morphed into a spare part as the Flyers’ season fell apart, dressing for only nine of the final 43 games. Leier said he was injured for three contests, meaning the Flyers scratched him a whopping 40 times.

So while Leier, a winger the Sabres acquired for Justin Bailey on Jan. 17, said he learned a lot in the NHL, he has embraced returning to the American Hockey League.

“Honest to God, as much as I wanted to be in the NHL this year, I think it was really good for me to get my confidence back when I played back down in Lehigh (Valley),” Leier said.

It took time, however, to generate confidence. Leier said the Lehigh Valley Phantoms “kind of eased” him into his fourth AHL season. He didn’t, for example, play on the power play until around the 15-game mark.

But by mid-December, Leier said he started feeling like his old self.

“It went from at the beginning of the year, trying to figure my game out again, to now, where I want the puck on my stick all the time, and I want to make plays every time I have the puck,” Leier said.

Leier said leaving the only organization he had known – the Flyers drafted him in the fourth round in 2012, 117th overall – was different. He became a fan favorite in the AHL, playing 226 games, and was known for his work in the community.

During Leier’s first game with Amerks, which was in Lehigh Valley, the Phantoms honored him with a video.

“He’s just a very special kid,” Amerks coach Chris Taylor said. “He meant a lot to that community over there. They gave a nice tribute to him when we played them, very nice. He did a lot of charitable things for the organization.”

The 5-foot-11, 180-pound Leier doesn’t know many people in the Sabres organization. He briefly played with Amerks winger Dalton Smith three years ago and was teammates with Sabres winger Sam Reinhart with Team Canada at the 2014 World Junior Championship.

“I’m happy to come to an organization like this where the guys get treated very well,” said Leier, whose younger brother, Keaton, is a professional dancer with the Atlanta Ballet.

The Saskatchewan native added: “I’m hoping I can be a big piece of the puzzle here with the Sabres.”

Despite all the Flyers’ recent upheaval, the trade caught Leier by surprise. Their rough start cost General Manager Ron Hextall and coach Dave Hakstol their jobs. The Flyers promoted Scott Gordon from the AHL as their interim coach.

New GM Chuck Fletcher has started putting his stamp on the Flyers.

“I was in the NHL the whole year last year and I thought I had a really good training camp this year and things didn’t work out,” said Leier, who signed a one-year, one-way contract worth $720,000 before the season. “So, honestly, I did not know it was going to happen. It’s a business.”

Leier has acclimated to the Amerks quickly, scoring one goal in four games. He also netted the shootout winner in Friday’s 3-2 victory against the Utica Comets.

“I’ll have one of the biggest hearts on the ice, night in, night out,” Leier said. “You won’t see a difference in my effort, compete, in the offensive zone, defensive zone.”

So far, Taylor has mostly utilized Leier as a fourth-liner.

“He hasn’t complained, he hasn’t asked what line he’s going to be on,” Taylor said.

Sabres prospect Danny O’Regan has showcased strong consistency – he hasn’t gone more than two games without registering a point – while scoring 17 goals and 29 points in 43 contests this season.

“He’s had one of the more consistent years of anybody,” Taylor said. “I think continually he keeps getting better, scores big goals for us, he’s really good on the wall, penalty killing, blocking shots, taking faceoffs. You name it, he does it. He just keeps getting better.”

Stability has buoyed some of O’Regan’s success. The former AHL Rookie of the Year has skated at right wing beside center Rasmus Asplund and Victor Olofsson virtually the entire campaign.

O’Regan, who has scored five goals and seven points in the last seven contests, said he has never lasted so long on a line as a pro.

“Usually there’s a lot of changes in the lineups, whether guys up and down or just in the locker room, just line changes because there’s a little bit of staleness,” O’Regan said. “But I think we’ve been solid the whole year and we’ve been talking, we keep getting better and better, I think. Our chemistry’s definitely there.”

The Amerks play Friday in Binghamton in their first game since the All-Star break and then visit Hartford on Saturday.