A day after two major pile-ups on local highways involving tractor-trailers, including one that left a trooper injured, Gov. Andrew M. Cuomo admonished truckers for ignoring his ban for tractor-trailers and commercial buses on major state highways like the Thruway.

“This is a disgrace, for these tractor-trailer drivers to be violating the ban and putting people’s lives in danger,” Cuomo said at a news conference Thursday morning in a Department of Transportation barn in Lancaster.

While tractor-trailers were spotted on state roadways Thursday, plenty of truck drivers were cooling their heels, waiting for the ban to be lifted, which occurred at about 9:40 p.m. Thursday.

At least 100 trucks were lined up at Jim’s Truck Plaza in Cheektowaga Thursday morning, just off the Exit 52 on the Thruway.

There were so many trucks coming to Jim’s, which has about 85-90 spots, that they obtained permission to have additional trucks stay in the old K-Mart lot next door.

“We got a lot of calls asking if we had parking because they were ticketed and forced to get off,” said Maria Monaco, a cashier in the gas station. “It’s been pretty busy. Not necessarily with the fuel, but for food and supplies that they need – they’re also coming in for conversation. … It’s definitely a patience-tester.” 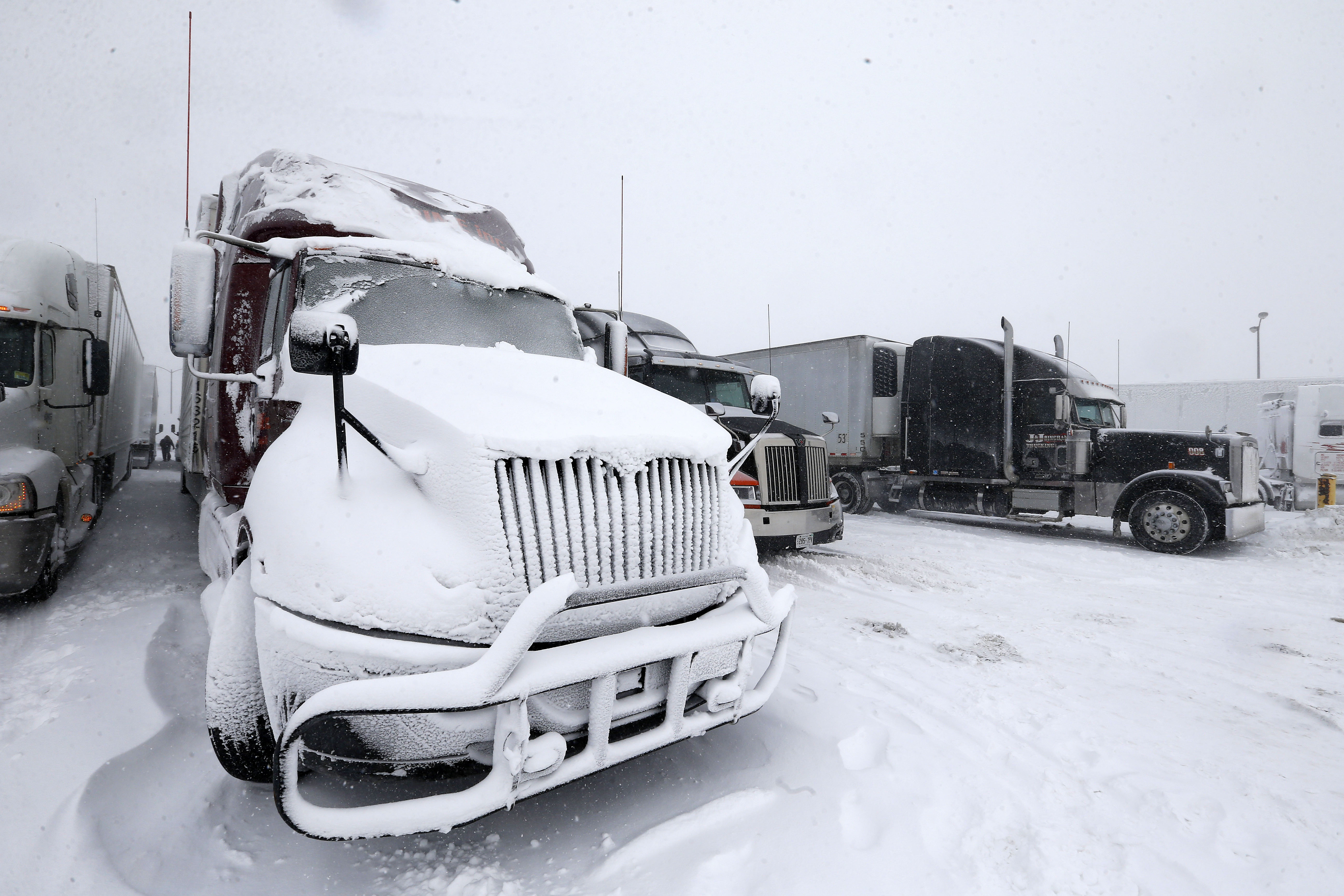 Ruffino Pacheco, 48, has been stuck at the facility at 2115 Walden Ave, across from the Walden Galleria, for two days, as his frustration mounted with not being able to do his job.

“Who cares about our life?” said Pacheco. “My dispatcher wants to do the delivery. He don’t care about the weather conditions, he don’t care if the 90 is closed, or the 190 is closed, he don’t care if you go on the 90 and the police is going to give you a summons. … They can destroy your whole life because we can’t afford that kind of money. That’s just the real situation for the driver.”

Pacheco said drivers have heard about how they will be ticketed if they violate the ban.

Pacheco drove from New Jersey and has been waiting to make a delivery in Tonawanda to a facility that was closed Wednesday and is also closed today. Even if he were able to make the delivery, his wouldn’t be able to get to his next stop in Angola for a pickup.

“We’re just sitting here waiting," Pacheco grumbled. "We’re waiting for God’s mercy. I’m so frustrated about the whole thing. Who cares about us?”

Other drivers understood the ban.

“If it’s risky, why take chances?” said Rajveer Singh. Singh is on a route from Massachusetts to his home state of California, but he’s been stuck in Cheektowaga since 3 p.m. Wednesday. “We are not driving cars, we are driving big trucks. I don’t want to be on the road if it’s bad. Safety first, you know?”

Hector Monteagudo, from Miami, was heading from Rochester to Minnesota but was diverted twice off the Thruway.

“It’s understandable,” he said of the ban, “because once a semi gets into an accident, you’re talking about a big wreck.”

Monteagudo, 23, who has been driving two years but was on a semi for 10 years with his father, was stranded in a travel plaza near Rochester yesterday. He could only advance a couple of exits before getting taken off the road again.

“We’re just finding a way to stay warm, and find something to eat, and at the same time have fuel in the truck, while saving enough fuel,” he said.

On the Canadian side of the Peace Bridge, trucks were staged at the Duty Free parking lot and at Flying J’s truck stop at Gilmore Road waiting for the ban to be lifted, said Aaron Bowker, a spokesman for U.S. Customs and Border Protection.

"Other trucks have been held at their loading docks by dispatchers waiting for the ban to be lifted," Bowker said.

He added that CBP officers "will be ready to process international commercial traffic once trucks are able to cross the bridge."

Apparently some truck drivers were attempting to find creative routes around the banned highways.

It's not always working out well. Authorities had to deal with a jackknifed tractor-trailer on Zimmerman Road in the Town of Boston, a narrow, hilly country road, said Erie County Mark Poloncarz at an afternoon briefing in Cheektowaga.

"The GPS directed the driver to what must have been a white knuckle drive," Poloncarz said.

He urged people out on the road to be on the lookout for trucks in places they don't normally see them.

Cuomo was in Buffalo for a second time in two days Thursday morning to assess the blizzard's impact and warn truckers to stay off the roads.

During the storm briefing, a reporter alerted him that a tractor-trailer had just jackknifed on the southbound side of Interstate 190 near Seneca Street.

Crews tend to a jack-knifed tractor trailer at the Seneca St exit on the I-190 south in Buffalo Thursday, January 31, 2019. (Mark Mulville/Buffalo News) pic.twitter.com/NNMpukIHHG

To drive his point home, Cuomo toured the region and stopped to talk to a couple of tractor-trailer drivers who were trying to get on Route 5 in Lackawanna.

.@NYGovCuomo finds two stuck tractor trailers who were on the road during the storm ban. The ban remains in effect pic.twitter.com/ijFMMZIJjo

During Wednesday's blizzard two major pile-ups were reported – both involved tractor trailers that shouldn't have been on the road. A 19-vehicle pileup on Interstate 90 east of Batavia left a state trooper injured after a truck struck her patrol vehicle, state police said. Another multi-vehicle accident was reported on Interstate 190.