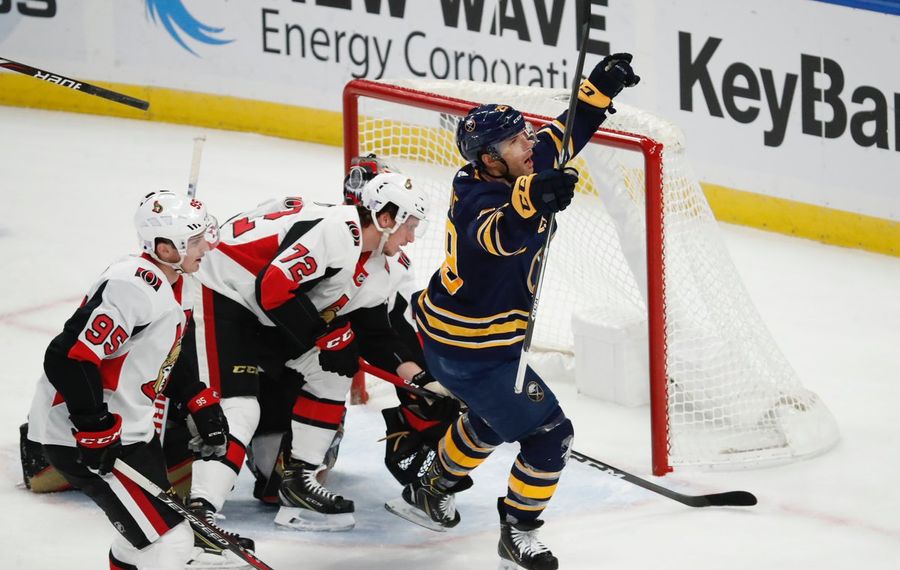 Neither Pominville nor Hunwick were scratched because of injury, Housley said. Instead, the change was made to get "fresh" players in the lineup. They were replaced by winger Remi Elie and defenseman Nathan Beaulieu. Additionally, Linus Ullmark started in goal for the fifth time in six games.

Hunwick, 33, played 13 minutes, 30 seconds in a 5-4 win over the Columbus Blue Jackets on Tuesday, his first start after 13 consecutive games as a healthy scratch. Pominville, 36, played 11 minutes, five seconds and has played in 44 of 50 games this season.

"It's always difficult," Housley said. "It doesn't matter who it is. As a coach, you don't want to tell a player he's not going to be playing. These guys have done a terrific job of handling these situations well, and I know it's not easy, particularly the guys who have been sitting out long periods and stretches."

Elie, a second-round draft pick of the Stars in 2013, had been a healthy scratch for seven consecutive games and 15 of the past 21 games. He had no goals and one assist with a minus-2 rating in 14 games since being claimed off waivers from Dallas in October.

The move may have been partially driven by Elie facing some of his former teammates. He appeared in 90 games for the Stars, scoring seven goals among 48 points.

Pominville, meanwhile, has 10 goals among 20 points with a plus-4 rating in 44 games. But he has only two goals with a minus-5 rating in his last 30 games.. He skated on the third line with Vladimir Sobotka and Tage Thompson against the Blue Jackets, registering a plus-1 rating.

Pominville appeared in his 1,000th career NHL game in November and reached 700 career points in October, ranking 11th in goals and ninth in assists in franchise history. He has appeared in at least 73 games in all but two non-lockout-shortened seasons since making his debut with Buffalo on Dec. 27, 2003.

Though Hunwick showed rust when carrying the puck against Columbus, he played well defensively despite having appeared in only two other games all season. Beaulieu has been a healthy scratch in 13 of the past 16 games and reportedly requested to be traded if his ice time does not increase.

The 26-year-old has three goals among seven points in 26 games this season. He is a restricted free agent at season's end. Lawrence Pilut, 23, was a healthy scratch for a second consecutive game despite having five points and a plus-4 rating in 16 games with the Sabres.

"It's a difficult situation, sitting out a lot of games," Housley said. "I thought Matt Hunwick did a terrific job coming off the break and contributing in that win last night. Remi is going to get an opportunity tonight. I know he's played here, and he's going to have a lot to prove. We're just looking to get some fresh bodies into the lineup coming off the break and a back-to-back situation."

The Rochester Americans will induct defenseman Doug Janik and forward Steve Langdon into their Hall of Fame prior to a game against the Springfield Thunderbirds on Feb. 8 in Blue Cross Arena.

Langdon will sign autographs during the first intermission, while a limited number of autographed items will also be available. Additionally, the Amerks will wear throwback jerseys inspired by the 1996 Calder Cup-winning team, featuring red and white stripes and navy-blue shoulders.

The jerseys will be available through a silent auction during the game. Janik spent five seasons with the Amerks from 2001-06, recording 91 points. He is currently an assistant coach for Springfield. Langdon spent five of his six professional seasons in Rochester from 1974-79, helping the Amerks to four playoff appearances.