It took decades to convince Americans to throw paper, tin cans, glass jars and plastic milk jugs into the recycling bin instead of the garbage.

And now, some of those recyclables are ending up in the landfill.

Recycling is not going away, but because of a shift in the worldwide market, the system is undergoing changes that will dictate everything from what we can recycle to how often we can do it to how much it will cost.

And this time, we're not going to get decades to adjust.

The changes can be seen as area communities are budgeting for new recycling contracts.

• West Seneca planned for a $40,000 increase in its new recycling contract, but the cost could be more than $1 million to continue weekly pickup.

• Wheatfield saw a price increase of 17 percent, mostly due to recycling.

China used to take most of the recycled materials collected in the United States for processing. But in 2018, it stopped accepting recyclables unless they had a low rate of contamination. That left out most of the recyclables Americans put at the curb, leaving materials recovery companies looking for other markets. Before China changed the game, the market had all but disappeared locally for some items, like colored glass.

"This is a big shock to the economics of recycling. It came out of nowhere, basically," said Andy Goldstein, recycling coordinator for Erie County, who added that municipalities are feeling it. "A year and a half ago they were getting a check. This year they’re paying.”

This is a lesson in supply and demand.

"You can also only recycle as much as it is economically feasible and sound to do," said Fenna Mandolang, operations manager of Buffalo Recycling Enterprise, a materials recovery facility in South Buffalo.

While Buffalo Recycling Enterprise did not send its plastic to China, it is feeling the pinch because California is now selling plastics to markets on the east coast, lowering the price, she said. The company also has had to find other markets for the paper it used to ship to China. 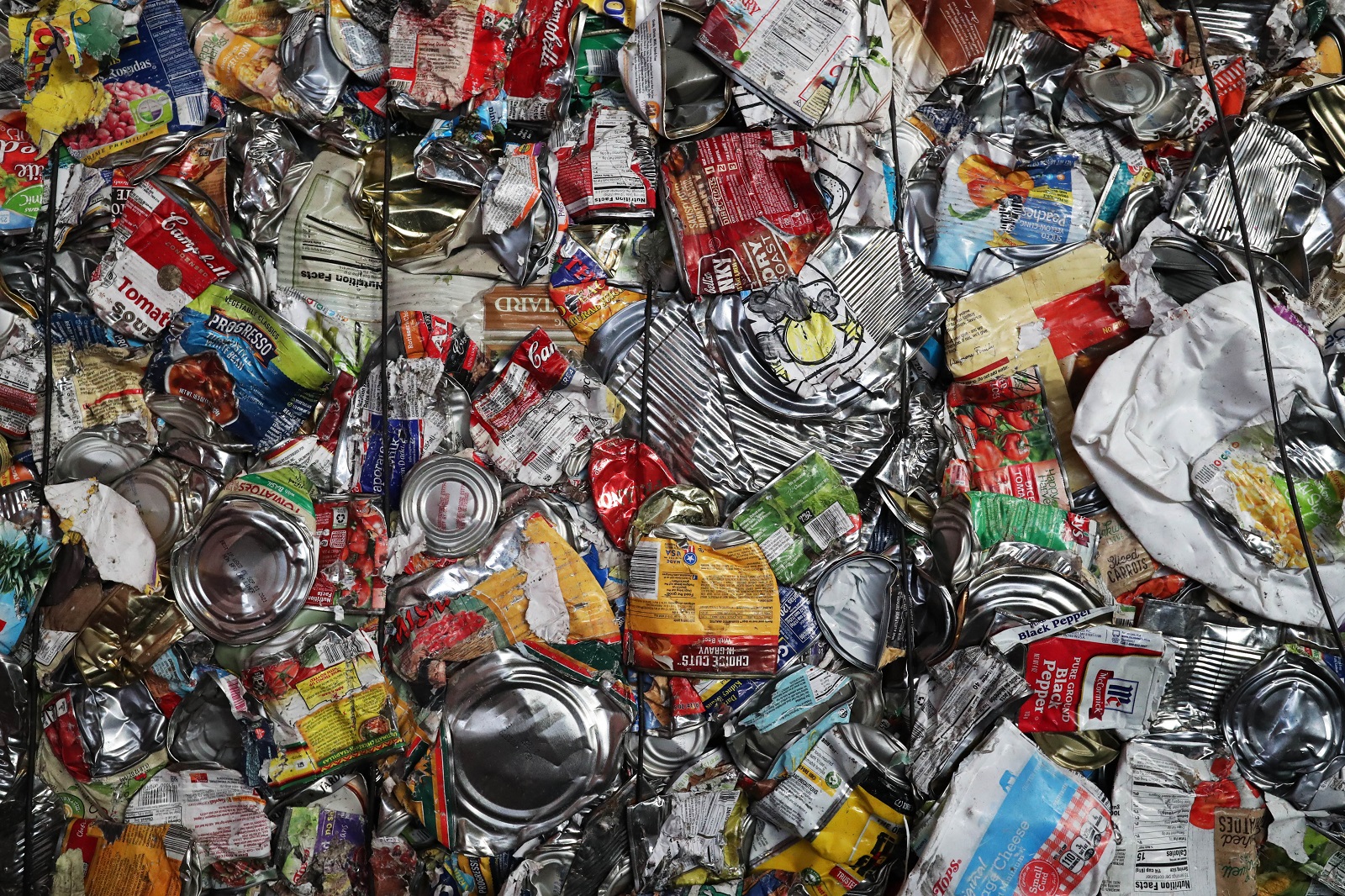 Bales of aluminum cans that have started the recycling process. (Sharon Cantillon/Buffalo News)

Some items can't be recycled

It has taken towns and cities dozens of years to get people to recycle. "Single stream" recycling increased participation, because plastic, metal and paper are collected in the same bin or tote.

"Over the years our people diligently have been putting this material into recycling bins," Amherst Highway Superintendent Patrick G. Lucey said.

But he discovered that not everything in the bins can be easily recycled.

"We found out colored glass has not been recycled in this area for many, many years," he said.

That's because it's difficult to filter out all the contaminants from other recyclables that glass comes in contact with in the recycling bin, Mandolang said. Glass also wears down the machinery, getting into gears and cutting conveyor belts, she said. It costs Amherst $83 for every ton of recyclables that is processed, but $35 a ton for solid waste that goes straight to the landfill, Lucey said. The math didn't make sense.

He is hopeful the town will find a market for colored glass in the near future, but the glass probably would have to be dropped off at different locations instead of being picked up, he said. The town also is limiting plastics to those with the numbers 1 and 2 on the bottom, which are in more demand than other plastics. It is not worth it to recycle the others anymore, he said.

"At the end of the day they just get landfilled anyway," Lucey said. "We’re trying to get as much un-recyclable material out of our totes."

The town also is encouraging residents to clean and rinse out plastic containers to cut down on contamination, and to keep plastic bags out of the recycling tote. The bags get wrapped around the sorting equipment, slowing down the sorting process, according to Mandolang. 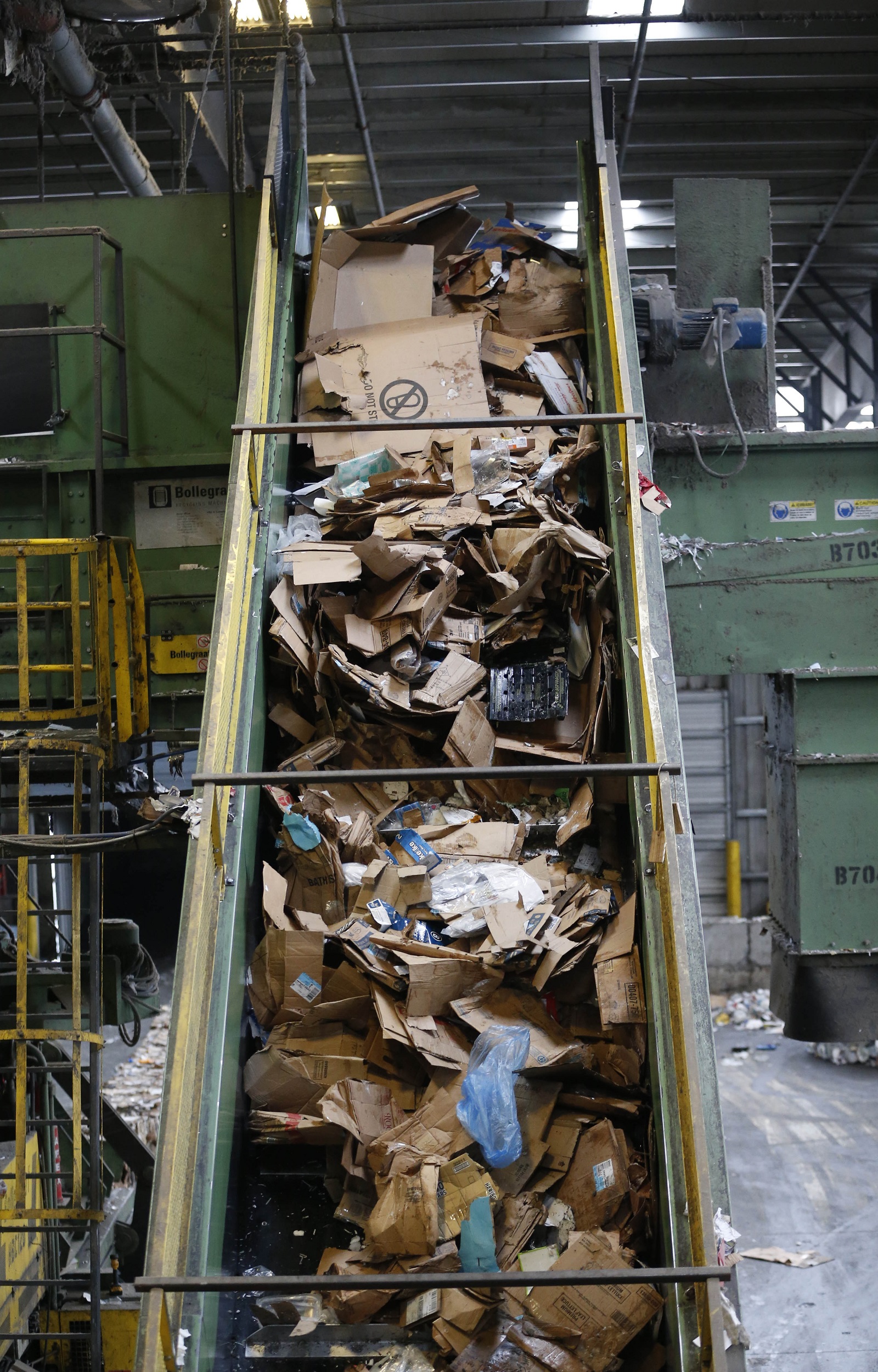 Cardboard is sent up the chute to the baler at Buffalo Recycling Enterprise. (Sharon Cantillon/Buffalo News)

That doesn't mean they need to be thrown in the garbage. Some grocery stores recycle plastic bags, and a West Seneca church ministry makes sleeping mats for the homeless out of plastic bags.

Cities and towns across the country are affected, from Hawaii to Maine, according to the New York Times. Some communities are refusing to accept some items, while costs are going up all over.

One of them, Franklin, N.H., is throwing all its recyclables in with the garbage because instead of getting paid for recycling, it has to pay $129 a ton, according to Governing the States and Localities magazine. Hannibal, Mo., stopped taking plastic and some communities in Pennsylvania don't accept glass, according to the Washington Post.

The move by China forced a hard look at the industry that had once been seen as a revenue stream for municipalities. There is a move to shift contracts to a risk and reward basis.

"We’re providing a service and there's a cost to that service. We also have material that we’re selling, but that’s a risk and reward that we’re going to share," Mandolang said.

When the market is stronger,  both benefit, and when it is weaker, it shifts into a charge for the customer. That's why the Amherst town worked with Modern Disposal Corp, which picks up the recycling materials, to revise its recycling brochure for residents to focus on items for which there is a strong market.

If there's a glut on the market, the price goes down, and in many cases, recycling facilities have to pay to have the material taken to recycle, said Goldstein. Metal and cardboard are still bringing in money, he said.

Niagara County's director of the Division of Environmental/Solid Waste said there needs to be an end to "wish-cycling."

"Just because you want it to be recyclable, doesn't mean it is," Dawn M. Timm said.

She said many plastics, such as plastic bags, single-use or lightweight plastic containers and toys, foam and packaging film cannot be recycled. Recycling needs to be simplified back to paper, some plastic, metal and aluminum, she said.

"This material suddenly became relevant when China didn't want it anymore and the value of recyclables wasn't offsetting increased processing fees," she said. "Nothing grabs attention like a cost increase."

West Seneca got a shock when it looked at bids for recycling. Continuing weekly pickup would cost about $400,000 more than biweekly pickup. And that translates to a 3 to 4 percent increase in taxes, Councilman Gene Hart said.

“We found that there are changes to the commodities market that exist today that didn’t exist previously,” she said.

The town will have a better idea of how much recycling is costing it as it works under the new contract, she said.

New Yorkers have recycled more than 320 million tons since recycling was mandated in 1992, according to the state Department of Environmental Conservation. And it's the third part of the reduce, reuse and recycle triangle.