In less than a decade, Larkinville has become an unexpected destination for work and play. The speed of redevelopment has a noteworthy byproduct: it has attracted a certain type of consumer.

Jamie Dinero, owner of Kornerstone Cafe and Juice Bar tucked just inside the entrance of the Larkin Center of Commerce, identifies a few of the traits that seem to unify the neighborhood's businesses and patrons.

"It's a crowd that's interested in renewal, the building up of their city, themselves and their health," she said.

Kornerstone's mission fits snugly with the values of its clientele, appealing through energizing, healthy sandwiches, salads, bowl, breakfasts, smoothies, juices and coffee that are sourced locally as often as possible. 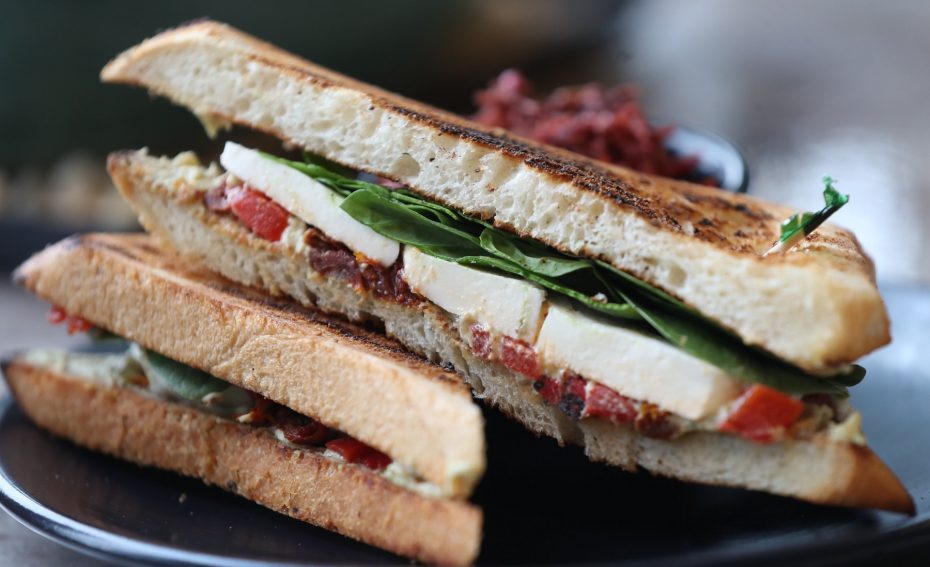 This is the Italian veggie sandwich with a side of beet slaw. (Sharon Cantillon/Buffalo News)

Along with Italian veggie and turkey multigrain, the Black Forest ham sandwich ($8.50) was a comfortable lunch, but it wove in unexpected, nutritious ingredients to meet the price tag. Dried cranberries, sliced asiago cheese, grilled Tuscan garlic bread, spinach and a house dressing raised the profile of a standard.

Under Favorites, the Grain Bowl ($8.50, featured image) didn't venture too far into bold ingredients; it's nutty quinoa topped with tomatoes, mozzarella, onion, basil and chopped cucumber and finished with a sizable scoop of house-made basil hummus to be mixed in as desired. Elegantly presented, the bowl proved more filling than expected and found a balance between oily and dry. 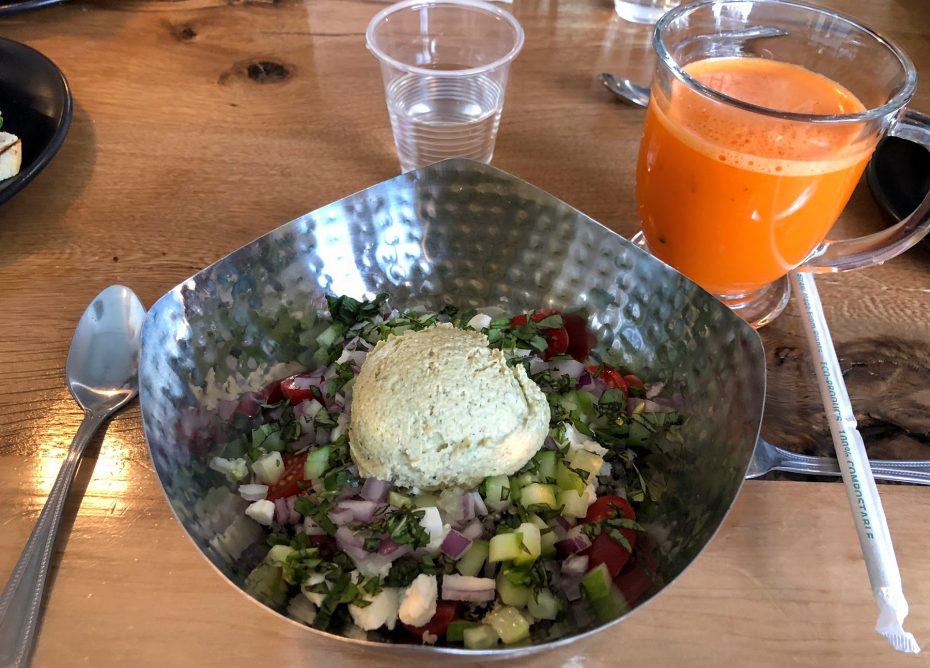 Dinero, a lifelong resident of the Town of Tonawanda, understands - even resonates with - Buffalonians' preference for big portions, which is uncommon to many health-conscious eateries.

Deep-purple beet slaw ($3.50, or as a side to a sandwich or salad) was pretty in its shredded state but could have used a lighter touch of balsamic vinegar. The vegan "chicken" salad ($3.50) has no trace of poultry, with tofu, vegan mayo, apples, grapes, onions and walnuts joining together for light, fresh and crunchy support.

These unusual sides are complimentary with an order of a sandwich or salad - an apple is an option, too - with soup or hummus available for $1.50 extra. 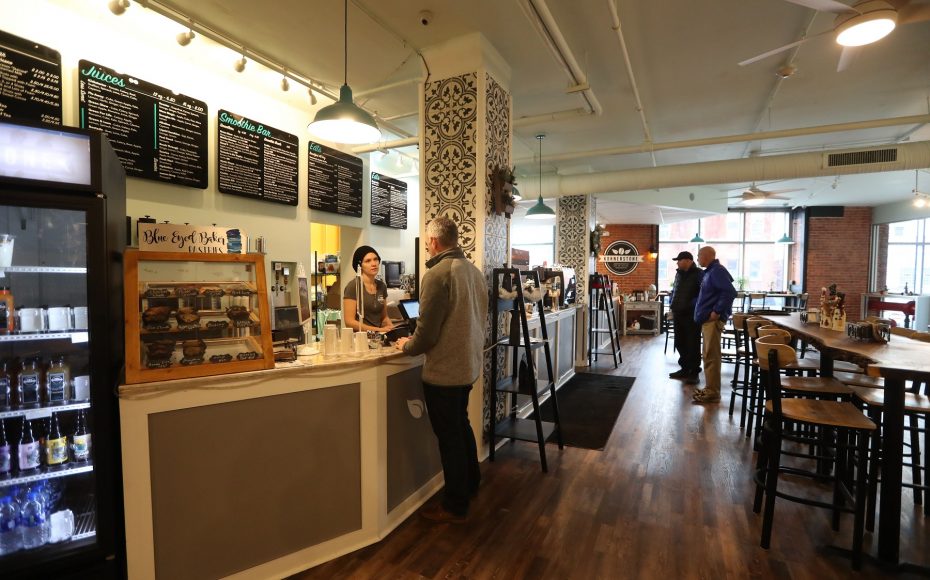 A look at the ordering area of Kornerstone Cafe and Juice Bar in Larkinville. (Sharon Cantillon/Buffalo News)

Hearty options included a sweet potato chili special ($4.50) under the Soup of the Day. Although its consistency resembled soup more than chili, it still delivered warmth and closed with lingering heat.

Freshly squeezed juices ($6.50 for 12 ounces, $8 for 16 ounces) pack in super foods such as turmeric, ginger and kale. Peel Good was an eye-catching orange health bomb, mild in sweetness through carrot and orange with a jolt of ginger.

An array of bottled juices chill in the refrigerator case to the left of the cash register for those in a hurry. Complimentary water - spruced up by grapefruit - is accessible near the prep area. 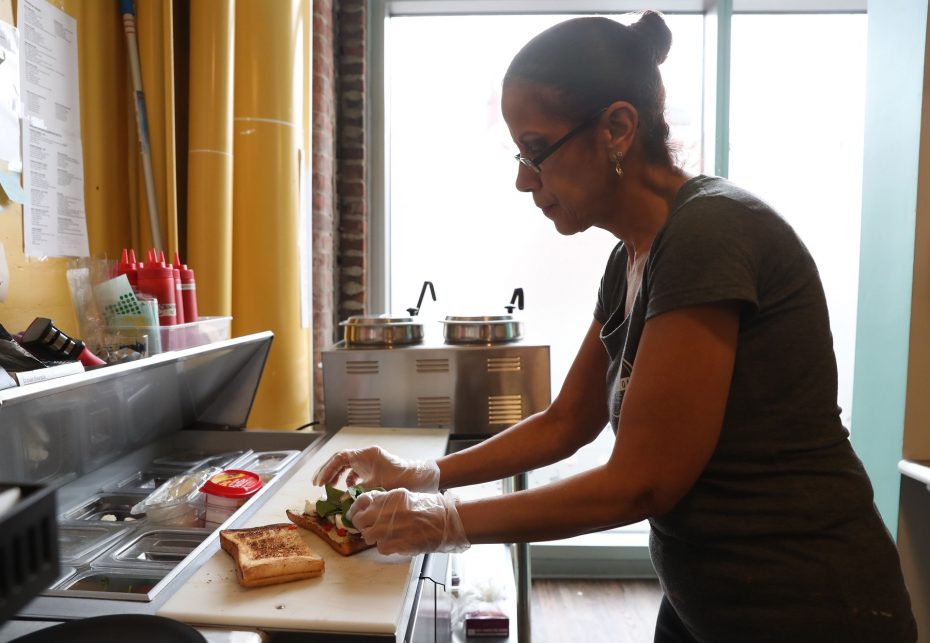 Like the neighboring Larkin Gallery, local art adorns Kornerstone's white walls, brightened by a stream of natural light flowing from the windows facing Seneca Street. The result is a colorful space that feels more inviting than cluttered.

"I wanted it to be an uplifting place, so I'm picky about the colors," Dinero said. "We want it to be comfortable, where people are left feeling better than when they came in."

Dinero's Kornerstone coffee roastery, at 1530 Military Road in Kenmore, predated her foray into cafes, contributes the house brew ($1.90-$2.90) at Larkin and is found at six other area businesses. The Larkinville spot is the second Kornerstone Cafe. The first, at 33 Elm St. in East Aurora, opened in December 2016 and gave Dinero confidence that her concept could succeed elsewhere. 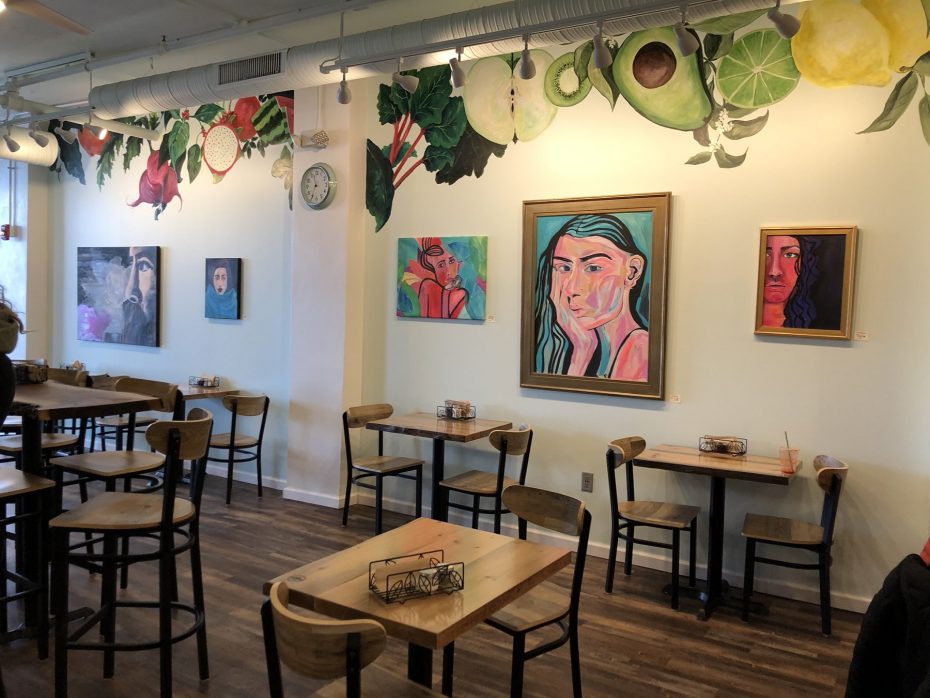 For those visiting from outside the Larkin District, Kornerstone can be a challenge to access, as street parking is often full and the lot across the street costs a minimum of $3. But neighborhood's progressive nature values walkability and, as a suggestion, Dinero said more parking spaces were available north of the cafe, closer to Swan Street Diner. 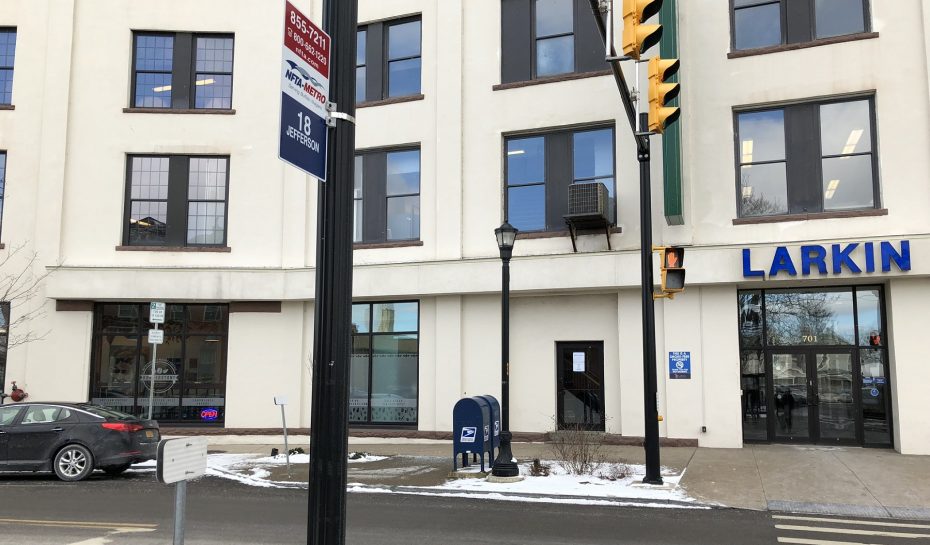 Kornerstone Cafe, marked by the "open" sign to the lower left of the image, is accessible from the main entrance to the Larkin Center of Commerce. (Ben Tsujimoto/Buffalo News)