Kirstin and Jon Hawayek arrived at their daughter’s apartment in southwest Montreal last weekend, well before the snowstorm, on a mission to pick up Kaitlin’s miniature Goldendoodle puppy.

Within minutes, she handed them a gold medal as well.

Old awards always end up back home in Western New York. The dog does, too, at least during competitions, and Kaitlin Hawayek and partner Jean-Luc Baker are about to perform in the 2019 U.S. Figure Skating National Championships, the country’s most prestigious annual figure skating event, on Friday and Saturday at Little Caesars Arena in Detroit. They compete in ice dance – imagine ballet on skates – and have risen from bloody knees to within reach of the podium.

“We’re going into the competition with the intention to win,” Hawayek said. “That’s what we’ve been training to do. That’s where our mindset is.”

Hawayek is determined to be the best in the world, and skating in the Olympics is a goal the 22-year-old has long pursued with a tenacity and charm born from her hometown of East Aurora. But to qualify to perform on the sport’s grandest and rarest stage, the 2022 Winter Games in Beijing, she must first take care of business in the United States.

Hawayek and Baker have been to U.S. nationals before, placing fourth, fifth, fifth and fourth over the last four years.

In 2018, in San Jose, they rebounded from their nightmare of the previous season, when Hawayek fell twice on national television, first losing her balance after a series of one-legged spins known as a “twizzle,” then tumbling to the ice when Baker botched a lift, drawing gasps from the commentators and crowd in Kansas City.

But the pair remained stoic as they finished the routine, endearing themselves to the audience and legions watching at home, then returned with a clean performance at last year’s competition, the final chance to make their case to the American selection committee for inclusion in the 2018 PyongChang Winter Games.

Hawayek closed the pair’s high-tempo, Latin-inspired short dance with several vigorous fist pumps, clapped, pumped both fists some more, and then lifted her arms skyward and waved her fingers, imploring the crowd for an even greater roar.

“Obviously, the confidence is coming in quite strong for Kaitlin,” laughed Charlie White, a six-time national ice dance champion and 2014 Olympic gold medalist, providing commentary for NBC. “She's getting very excited. And honestly, they deserve it. It's just like getting a monkey off your back when you can go out there and skate the way that you know you can.”

The U.S. was able to send three ice dance teams to the Olympics a month later, and Hawayek's and Baker’s short dance performance at nationals – their best ever but at times overcautious, White said – briefly catapulted them into first place at the most important qualifying event.

Their hearts sank as their names began to slip down the rankings, as expected. 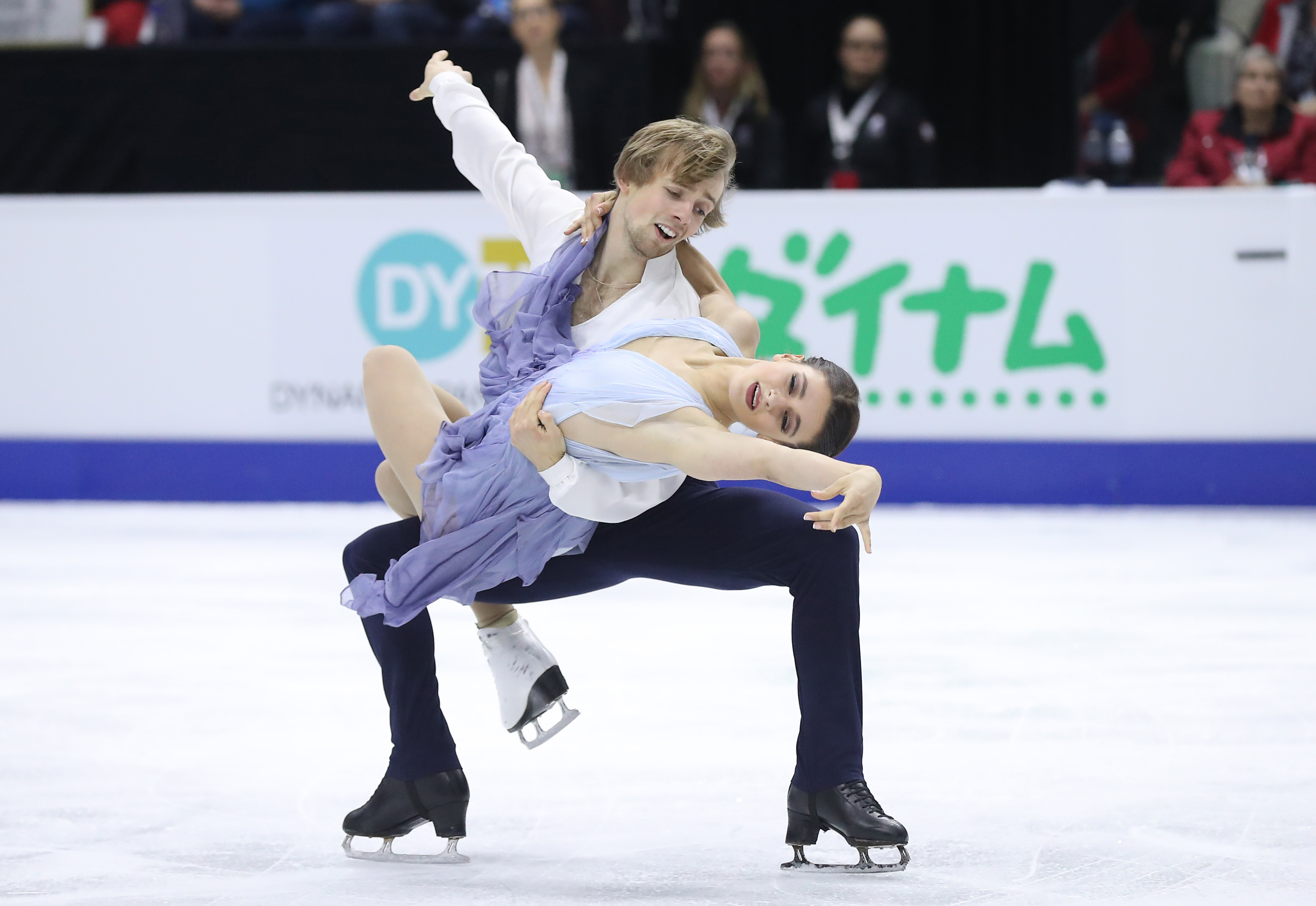 Kaitlin Hawayek and Jean-Luc Baker of the United States compete in the ice dance free dance program during the 2016 Skate Canada International at Hershey Centre on October 29, 2016, in Mississauga, Ont. (Photo by Tom Szczerbowski/Getty Images)

Over the previous four years, those pairs had won national titles, medaled in every International Skating Union Grand Prix assignment and finished among the top six at the World Figure Skating Championships.

“We approached last season with our goal to make the Olympic team," Baker said, "but we also knew the teams in front of us were stacked."

Hawayek and Baker, finishing fourth, won pewter, a medal awarded in the U.S. but an oddity on the international stage.

Kaitlin handed it to her mother.

Hawayek was so close, yet so far away, on a couch in her condo in suburban Detroit during the 2018 Winter Games.

She and Baker were named first alternates for Team USA but didn’t travel, and she described watching her friends and rivals live the Olympic dream from half a world away, through a television, last February as little more than a blur.

“It’s funny. I don’t really remember too many specific things about watching the Olympics,” Hawayek said last week, “other than I think we were all at my place when the free dance was going on.” 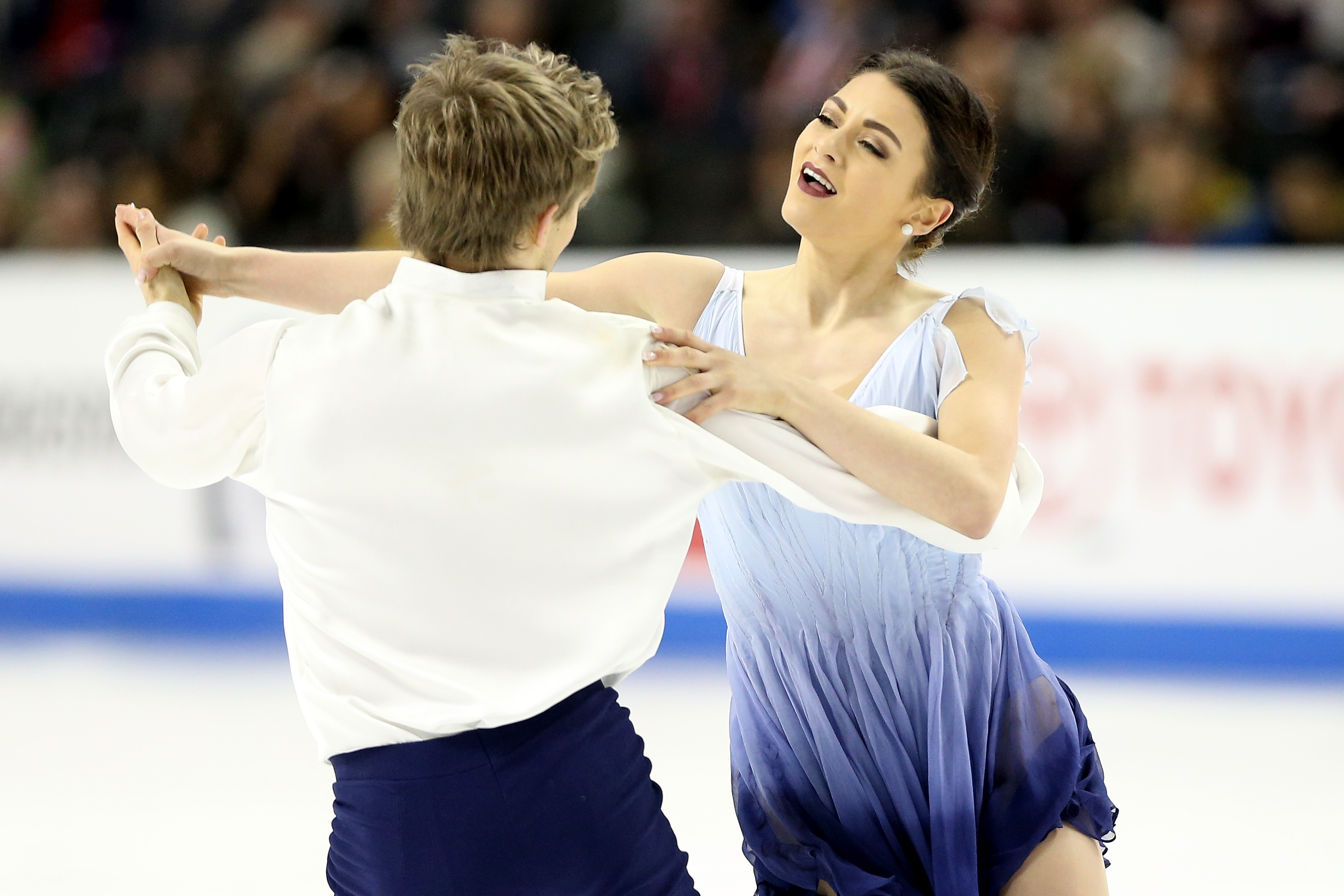 Kaitlin Hawayek and Jean-Luc Baker compete in the Free Dance during the 2018 Prudential U.S. Figure Skating Championships at the SAP Center on January 7, 2018, in San Jose, Calif. (Photo by Matthew Stockman/Getty Images)

But within two months, she and Baker were in the process of moving from Michigan to Montreal to begin training under Marie France Dubreuil and Patrice Lauzon.

The married couple, former five-time Canadian champions and two-time Olympians, had coached three of the top four finishers in PyongChang, including the gold and silver medalists, Scott Moir and Tessa Virtue of Canada, and Guillaume Cizeron and Gabriella Papadakis of France.

Hawayek has been skating since she was 3 years old, and her parents had been traveling between Buffalo and Detroit since Kaitlin was 13, committed to the best coaching and training facilities they could find.

Back then, one parent stayed with Kaitlin at a Residence Inn for several days each week, while the other remained home in East Aurora with their two sons. Kaitlin attended Nardin Academy on an altered schedule for a year before attending class in person became too difficult, then switched entirely to online coursework and trained full time.

The Hawayeks bought a condo in Bloomfield Hills, Mich., where Kaitlin lived, and for years, Kirstin and Jon alternated weeks with their kids, working in tandem like the dancers and reconvening on the weekends.

“It became a way of life,” Kirstin said. “You didn’t think anything of jumping in the car and driving five hours to Detroit. It was like commuting to work.”

In 2012, Kaitlin partnered with Jean-Luc, the son of competitive skaters-turned coaches in Washington state. His mother, Sharon Jones Baker, competed in ice dance for the United Kingdom at the 1988 Winter Olympics, and his father, Stephen Baker, competed at the 1976 World Junior Championships.

Baker, 25, was born with a club foot that dragged behind him as a toddler, but it wasn't long before he went from wearing a corrective cast to ice skates.

Hawayek and Baker were a dynamite pairing from the start.

In their first season together, they won silver at the national championships, competing at the junior level under coaches Pasquale Camerlengo and Anjelika Krylova.

In 2014, they won gold and became World Junior champions. 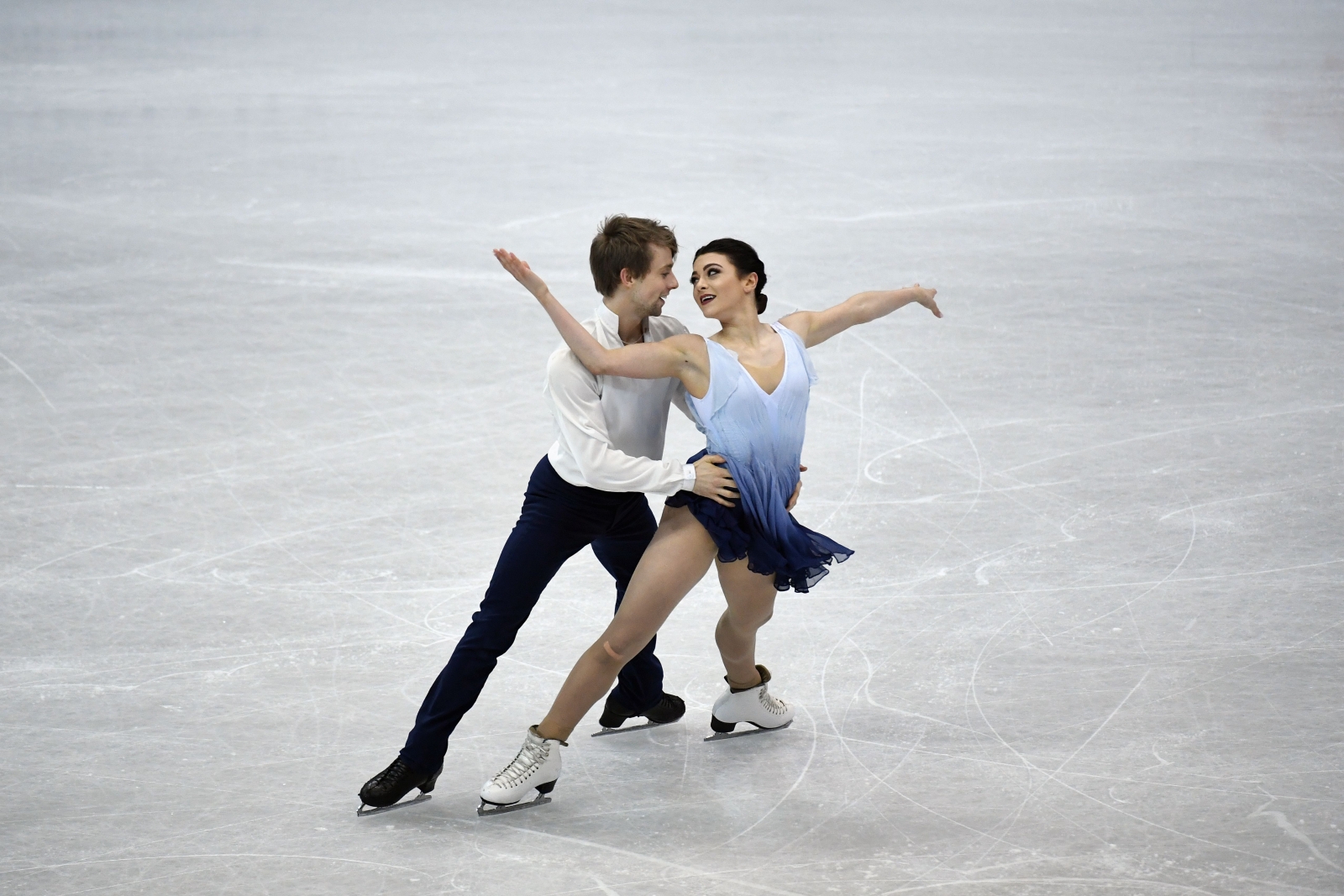 The pair continued collecting top-five finishes around the globe, advancing to senior-level competition in 2015, always sending their prizes back home.

“I think this is generally true of all the athletes I know,” Kirstin said. “They don’t like to keep their medals and have them on display in their own living space. I think they like to savor the moment when they have their successes, but then they don’t want it on display.

“They have to focus on what they need to do next.”

Last January, only weeks after nationals, Hawayek and Baker won the Four Continents title in Taiwan, their first gold medal on the senior circuit.

But the competition is an afterthought in an Olympic year, and the Americans heading to PyongChang were absent from the field.

“We were very proud to be a first alternate, representing the U.S., and very, very supportive of the other teams,” Jon said. “Everybody knows how hard everybody works. And we’ve had tons of people that have said, ‘Jeez, are you hoping that somebody gets sick? Are you hoping that somebody gets injured?’ And we said, ‘Absolutely not, because we certainly know that that could be us at some point, too. And everybody works so extensively and extremely hard to get there.’ ”

The U.S. ice dance teams in PyongChang placed third, fourth and seventh in a field of 24.

The Shibutanis, a brother-sister tandem known as the “Shib Sibs,” captured bronze. They finished just ahead of reigning U.S. champs Hubbell and Donohue, who had previously moved their training from Michigan to Montreal. 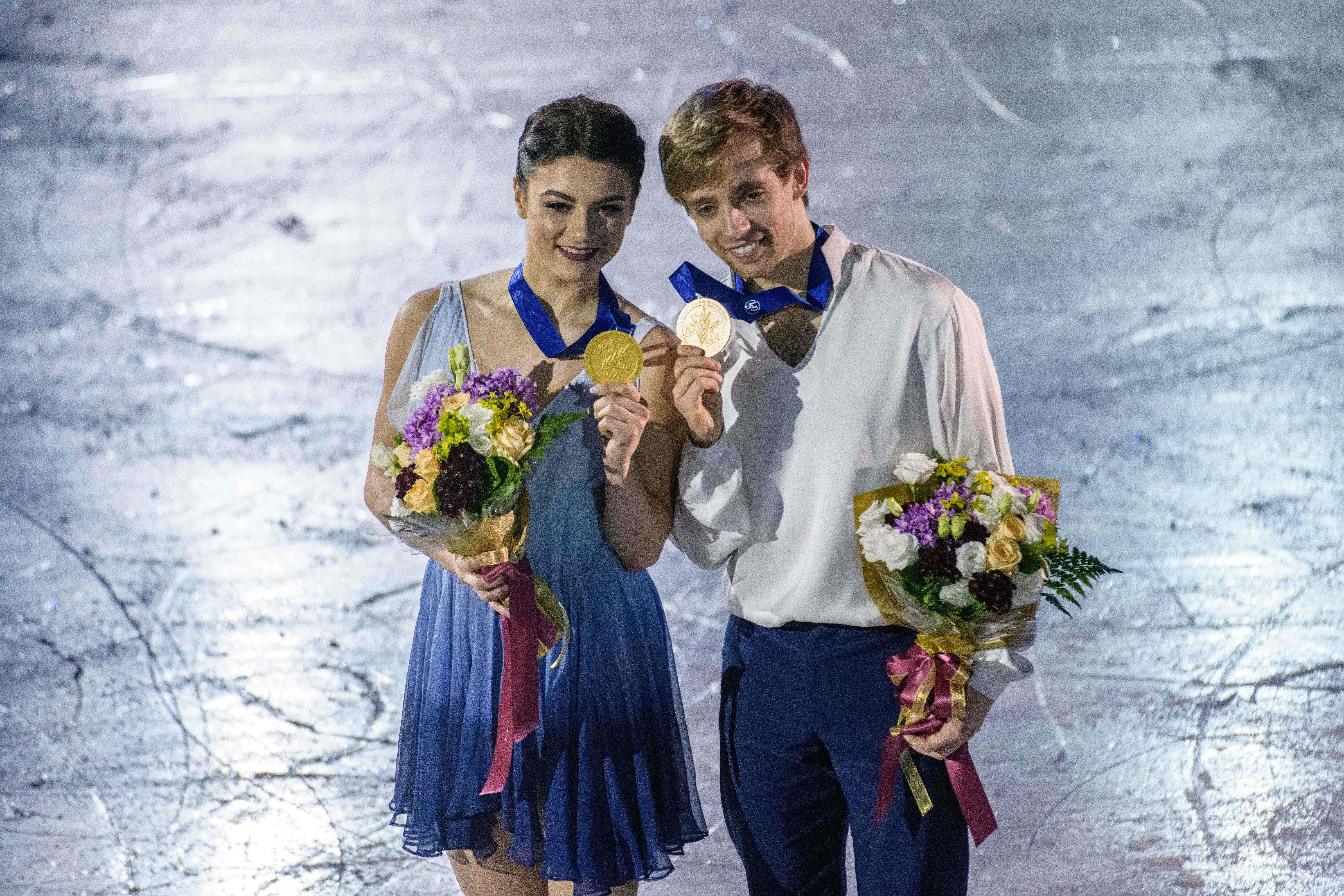 “Kaitlin and I, we cheered on all of our friends,” Baker said. “We had a lot of friends in the event, so we weren’t demoralized because of it.”

But Hawayek and Baker were disappointed, her parents said, particularly watching skaters they had bested in various international competitions.

“It was hard,” Kirstin said. “I think even for Jon and I, as you’re watching it you’re thinking, ‘Darn. This should have been their chance.’ You know? But it is what it is and you look forward to the next four years.”

A month later, the Shib Sibs withdrew from the World Championships in Milan.

They were replaced by Hawayek and Baker, who skated to a 10th-place finish, underscoring the depth of U.S. competition and reinforcing the notion that they belonged among the best in the world.

Hawayek crashed with friends in Montreal before she and Baker found apartments of their own, living out of suitcases until her parents arrived with the moving truck.

Their new coaches, Lauzon and Dubreuil, welcomed the pair into the fold at the Gadbois Centre based on their vast potential and friendships with several competitors under their guidance.

“To accept somebody in the school is to make sure their personalities and commitment fits with our way of training and the chemistry with the other athletes,” Lauzon said.

Hawayek said it’s been beneficial to “have a new set of eyes” and believes their performances have matured from technical and communication standpoints.

Baker said they’ve also worked to change their mindset, and now compete “knowing that we trained to win.”

“They’ve grown a lot,” Lauzon said. “We’re taking it slowly because we want to build their foundation for the next couple of years, and we’ve struggled a bit because Jean-Luc had a severe concussion in the summer, so it was a little bit more challenging than we thought it was going to be. But overall we’re pretty pleased with the way the season is going.”

In November, the pair captured their first Grand Prix medal at the NHK Trophy in Japan, the gold Hawayek handed to her parents last weekend.

They’ve also placed fourth at the Internationaux de France and sixth at their first Grand Prix Final earlier this month in Vancouver.

“It all goes back to Olympics,” Jon said. “There are people competing who they beat internationally, but the U.S. field is deep, and there’s timing issues with the longevity of careers and everything. They feel like this is their cycle, and they’re going to continue to train with the mentality that ‘We can be the best of the best,’ with that goal of getting to the next Olympics.”

With the Shib Sibs taking a year off from competition, Hawayek and Baker appear poised to medal at the U.S. Championships.

It’s an important competition, even at the start of this four-year cycle, a major stepping stone on the way to the podium in Beijing and the day Hawayek can hand her parents an Olympic gold medal.

Kirstin and Jon laugh at the thought and reply in tandem.