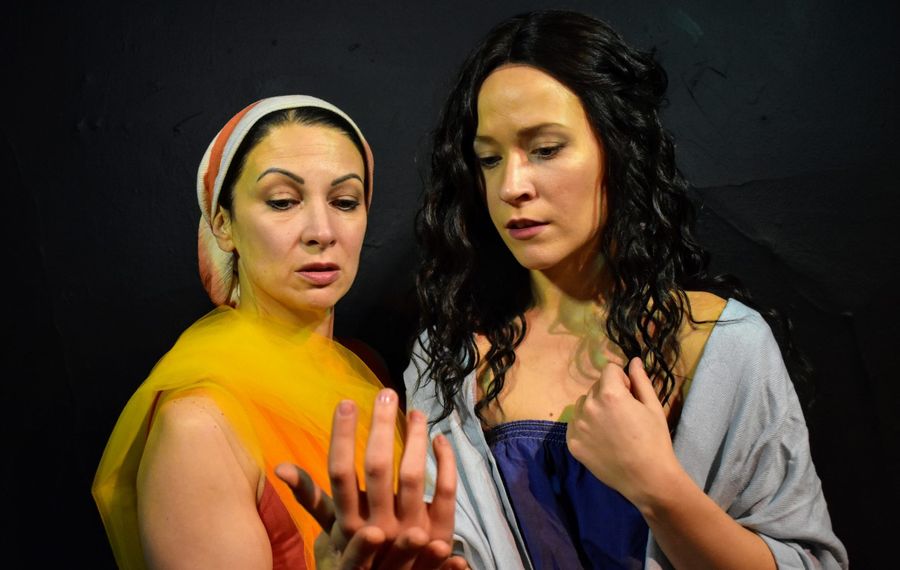 Bad girls aren't born, they're made. That is the theme of "Medusa Undone," a new take on an ancient tragedy now on stage at New Phoenix Theatre, presented by a new theater company, Post-Industrial Productions, which also goes by PIP.

Tragic backstories are not unique to Greek mythology, or to theater. Just look at Elphaba, who goes from self-conscious green-skinned activist to the Wicked Witch of the West after being misunderstood and mistreated in "Wicked." Or Angelina Jolie's movie version of "Maleficent," in which a sweet and talented fairy is brutally assaulted by the young man she loves, turning her heart dark and leading to the curse that creates "Sleeping Beauty."

Before them, there was the wickedest woman of them all, the murderous Medusa, who was so hideous that a mere glimpse of her snake-covered head would turn men to stone. But she wasn't always that way, either.

In her 2012 play "Medusa Undone," Buffalo playwright Bella Poynton tells how Medusa, a mortal woman serving as a priestess for Athena, was cursed for the "crime" of having been raped. Athena, the goddess of wisdom, war and justice, proved to be jealously unjust after her rival, god of the sea and storms Poseidon, raped Medusa in her temple of the virgins.

Poseidon walked away, leaving Medusa as the target of Athena's wrath. The vengeful goddess left her servant with a disfigured face, a head of snakes, and eyes that meant death to all who looked at her. It was victim-blaming of the first degree.

Written before the headlines were full of Harvey Weinstein and the Kavanaugh hearings, Poynton's powerful statement gains even more heft from #MeToo, and is well-served by the performances in its Western New York premiere.

Anna Krempholtz, who will be seen this spring as Ophelia in Irish Classical Theatre Company's "Hamlet," brings us a Medusa in the freshness of youth -- a young woman naively innocent about how her beauty and friendly affections appear to the gods. Brett Klaczyk is a lusty, earthy Poseidon, full of feelings, but only for and about himself. It is disturbing how realistic -- and familiar -- Poynton's dialogue is when Poseidon tries to justify, rationalize and explain away the rape.

Paige Allison Donatelli plays Athena with an aloof severity and Becky Globus, as Medusa's sister Stheno, embodies society's desire to accept the fortunes of fate and not make waves. In the end, all Medusa has left is her mentor Echo, a former oracle played with graceful gravity by Diane DiBernardo, who tries to help her maintain her beautiful spirit.

But we know that is not how Medusa chooses to survive; instead, we see the creation of the monster of myth.

[Related: Read more about the beginnings of Post-Industrial Productions]

The show has not had many productions and the flow of the action and dialogue is sometimes uneven. Still, under the direction of Maura Nolan Coseglia, it is a strong entry out of the gate for a new theater company, with ticket prices ($20) designed to encourage audiences to give it a try.

Audience members are advised that, although the action in the rape scene occurs offstage, there is a vivid assault and the show comes with trigger warnings. The production also is collecting donations for Compass House, and bringing a donation of clothing or canned goods will get patrons $5 off tickets bought at the door.

*Read more theater reviews by clicking the Story Topic, below.