ALBANY – New York lawmakers Tuesday authorized the most sweeping set of protections to the state’s abortion laws in 49 years, raising emotions from advocates and opponents who descended on the state Capitol for most of the day.

The measure, which Gov. Andrew M. Cuomo quickly signed into law Tuesday night, was pushed through by Democrats who now control both legislative houses. The Senate passed it 38-24. In the Assembly, it passed by a 92-47 margin.

In the face of calls at the federal level to weaken abortion rights, the bill maintains abortions as legal within 24 weeks of the start of a pregnancy – “or at any time when necessary to protect a woman’s life or health.’’ Late-term abortions had previously been authorized under state law if they meant saving the life of a woman.

The measure, which takes effect immediately, expands access to abortions by authorizing other health professionals – beyond physicians under a 1970 state law that came three years ahead of the landmark Roe v. Wade U.S. Supreme Court decision – to perform abortions.

Physician assistants will be permitted to also carry out surgical abortions and licensed midwives and nurse practitioners can do nonsurgical procedures using medications if they are “acting within his or her lawful scope of practice," according to the legislation.

“The Legislature finds that comprehensive reproductive health care is a fundamental component of every individual’s health, privacy and equality," reads the opening sentence of the new law.

Signs and citizen lobbyists were scattered throughout the Capitol. “Late term children feel pain," read one sign of an anti-abortion protester. A woman nearby held up a pink sign that simply stated: “Pass RHA.’’

Advocates say the measure is needed to protect abortion access in New York in the event the Supreme Court overturns Roe v. Wade. Tuesday was the 46th anniversary of the landmark court ruling.

“There are lots of bills that are in the hopper at various levels of government seeking to bring the best test case to the Supreme Court for an outright overturning of abortion. What it would do would be to revert (the issue) to the states. New York would be one of the states where a woman’s basic rights would be protected," said Assemblywoman Deborah Glick, a Manhattan Democrat and the bill’s sponsor in the 150-member Assembly.

Glick said parts of the measure passed Tuesday were about codifying New York law with federal case law, including Roe v. Wade. Other sections, such as expanding who can perform abortions, go beyond those case laws to stake out new legal ground in New York.

To claims that the new measure will increase late-term abortions, Glick said such procedures “are generally individual tragedies. Those are wanted pregnancies that either go awry or a woman’s health is dramatically impacted." She said women needing late-term abortions often needed to travel to other states because abortions conducted after the 24th week other than to save a woman’s life was a criminal penalty.

But critics, led chiefly by Republicans in the Legislature, say the measure will lead to more abortions in New York, especially later in a pregnancy. 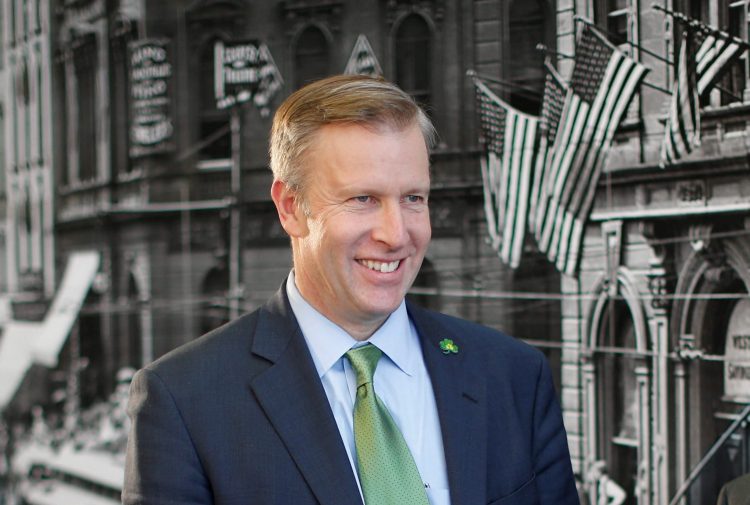 “The proponents have been saying this is merely a codification of Roe v. Wade. It’s a far more dramatic expansion of abortion," said State Sen. Chris Jacobs, a Buffalo Republican. "It will make it much easier for late term abortions and partial birth abortions."

Jacobs said New York’s longtime statute permitting legal abortions until the 24th week of a pregnancy is already among the longest in the world, and that the new provision allowing later term abortions for also the “health” of the mother can be interpreted as mental or emotional conditions.

“I feel as though they’re using the fear of the Supreme Court doing something as a ability to dramatically expand abortions rights in this state. I believe even pro-choice people, if they knew what was in this bill, would not be supportive of it," the lawmaker added.

A generations’ old fight plays out

In his State of the State in 1970, then-Gov. Nelson Rockefeller, a Republican, called the state’s abortion laws “archaic." Still on the books was an 1830 statute that permitted abortions – at any time during a pregnancy – if the mother’s life was in danger.

“I urge your humble bodies to resolve the differences of the past and to give favorable action to much-needed legislation on abortions reforms," Rockefeller told lawmakers.

Later that session, New York made national headlines and joined a movement by a handful of other states in making abortion legal. Three years later, the Supreme Court OK'd abortion.

In 1970, like now, a leading voice against the abortion efforts was the Catholic Church, which in 1970 characterized the abortion bill as “tragic." Last week, bishops in New York, acknowledging they had lost another abortion fight in Albany, said the new measure “will expand our state’s already radically permissive (abortion) law.’’

The path to passage of the RHA began in earnest in the Assembly in 2006. Republicans in control of the Senate reliably blocked the measure over the years. The GOP dominance ended with decisive defeats at the hands of Democrats in November.

Pink – via scarves, ties and jackets – was the color of the day for many lawmakers, who returned to Albany after a long weekend to pass a bill whose outcome had little drama given that both houses already committed to approving it early in the new 2019 session. 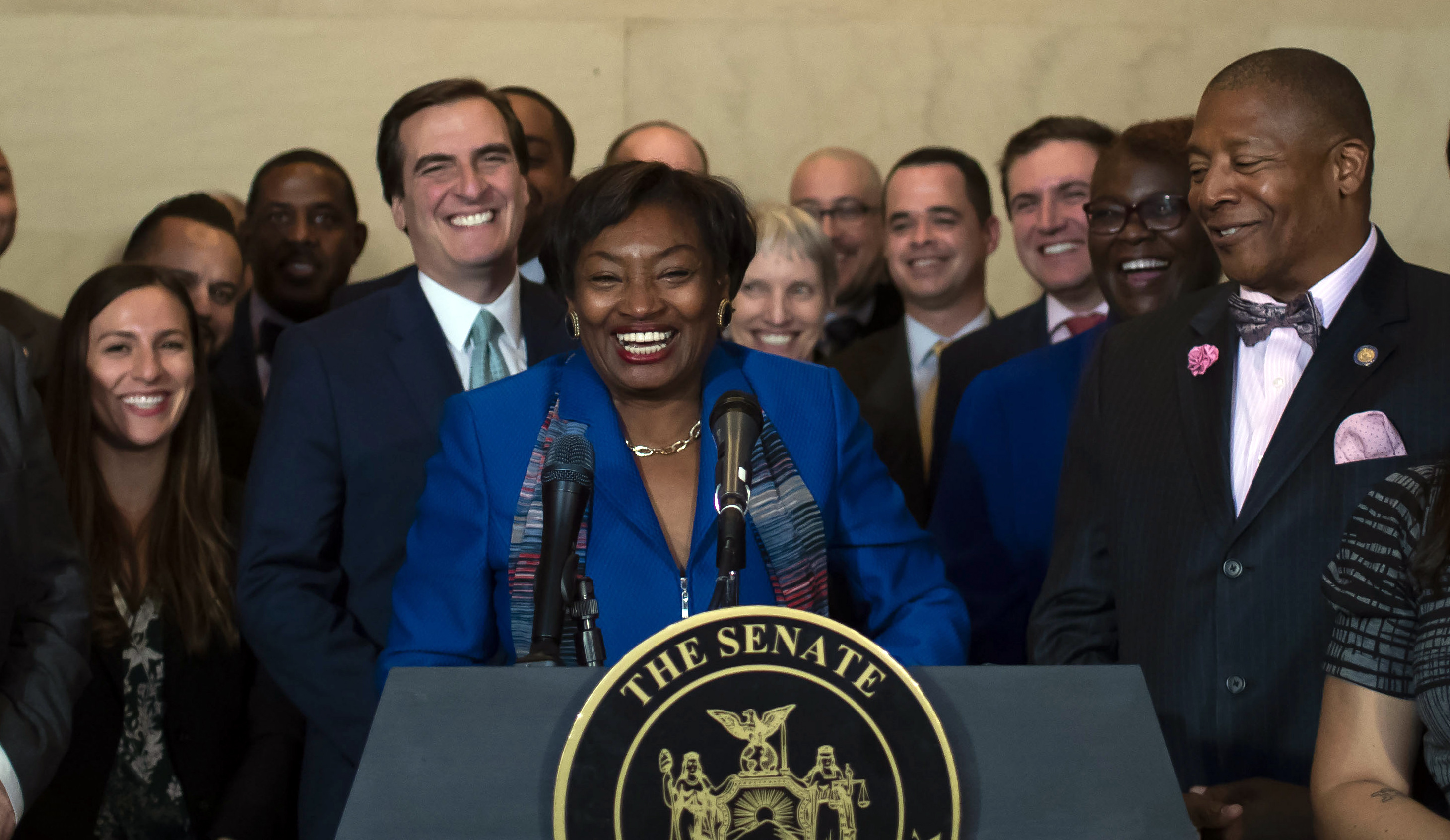 Senate Majority Leader Andrea Stewart-Cousins, a Westchester Democrat, recalled how she introduced the abortion measure in 2007. She said the idea was called “crazy” and a “solution seeking a problem” because no one really thought Roe v. Wade could be overturned.

Now, with a conservative majority on the Supreme Court’s bench and with Trump vowing to fight to undo some abortion rights, she said Tuesday that efforts to undo Roe v. Wade in Washington and elsewhere are real.

Senate Republicans, though, warned that the new measure will have dangerous consequences. They said the legislation repeals criminal code language regarding illegal abortions. They brought a woman to the Capitol from the Bronx who was attacked last year by her then-boyfriend; the multiple stabbing killed the 26-week-old fetus she was carrying and the man was charged with committing an illegal abortion.

State Sen. Catharine Young, an Olean Republican, said taking the illegal abortion language out of the penal code is “an assault on a woman’s fundamental right to pregnancy." They sought, and lost, to get an amendment for specific criminal charges against individuals whose actions result in miscarriage.

During the Senate debate, State Sen. Andrew Lanza, a Staten Island Republican, said the new measure will treat someone who punches a woman who is not pregnant in the stomach “precisely the same under our penal code as punching a pregnant woman with the intent of ending her pregnancy and in fact doing so.”

“I have to disagree with my colleague,’’ said State Sen. Liz Krueger, a Manhattan Democrat and the bill’s sponsor in the Senate. She said other criminal penalties, such as first degree assault, provide prosecutors with tools to seek far longer prison sentences against domestic violence attackers, for instance, than the expiring abortion language in the criminal law.

“We don’t disadvantage any women … by changing our laws but we do protect a far greater number of women to get, without discrimination, the health care services when they need them,’’ Krueger said to Lanza.

“There is nothing radical about this bill. The decision about whether to have an abortion is deeply personal," she said, adding that government should not play a role in those decisions. Krueger said New York law failed to meet the standards of Roe v. Wade and it was time to redo “antiquated” abortion laws.

State Sen. Rob Ortt, a North Tonawanda Republican, said Democrats’ claims that the RHA bill is needed because of attacks by Trump on Roe v. Wade is “disingenuous at best” because the measure has been kicking around Albany long before Trump became president. “The reality is this bill clearly defines … that we simply do not place any value, legally speaking, on the life of the unborn child,’’ he said.

The Reproductive Health Act was accompanied by two other pieces of legislation. First, health insurance policies would be required to cover all FDA-approved contraceptive drugs and devices, as well as voluntary sterilization procedures. Supporters said it will reduce unintended pregnancies, and includes maintaining an existing “conscience protection” for religious employers to opt out of having to offer contraceptive coverage in their employee health plans.

An additional part of Tuesday’s package bans discrimination based on an employee or a dependent’s reproductive health decision-making. It bans an employer from accessing information about a worker’s decision to have an abortion without written permission from the employee. It also permits civil actions against employers who violate the bill’s provisions.

The New York Health Plan Association, which represents 26 managed health care plans in the state, said insurers already provide an array of contraceptive options through the federal Affordable Care Act. But the new measure greatly expands coverage and will add to insurance costs for employers and consumers.

The senator cautioned that lawmakers “by no means” believe important decisions about whether to undergo an abortion “are to be taken lightly.”

“We need to get out of the way and let people make those choices,’’ Stewart-Cousins said.

Stewart-Cousins said the abortion measure is just one outcome of the Democratic takeover of the Senate, which will soon see new laws on everything from immigration to marijuana legalization in some way.

“You voted for us for a reason. We’re here to do what New Yorkers expected us to do," the Senate leader said.