Inspired by a Buffalo News article describing North America's first two-year brewmaster program, Erik Greiner crossed the border on a whim to pursue the craft. When he first started brewing beer, at Niagara College in Canada, Greiner wasn't yet old enough to drink in the United States.

Belt Line opened on the fringes of the Larkin District with beer and cider on Jan. 10 at 545 Swan St., with its two entrances facing Hamburg Street. Wine is expected later this week.

The brewery name refers to Buffalo's Belt Line Railroad - shaped like a belt around the city - built in 1882 and serving as a commerce transportation hub for roughly three decades. Historic images of the railroad and the nearby Larkin neighborhood are scattered throughout the taproom. 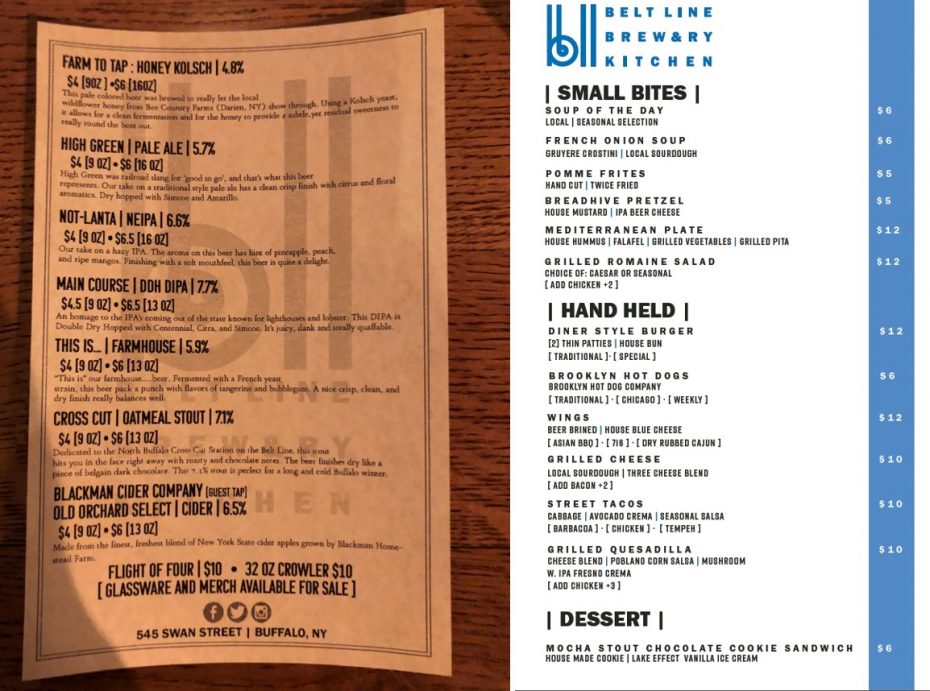 Beer and food menus for Belt Line. As of Jan. 21, only the beer list is available, with food to come soon. Update on food menu: Tacos will be replaced by guacamole. Please click for a larger image. (Ben Tsujimoto/Buffalo News; food menu from Belt Line)

Following the theme, two of Greiner's debut beers - High Green, a pale ale, and Cross Cut, a stout - refer to an industry term meaning "all go" and a North Buffalo rail stop, respectively. 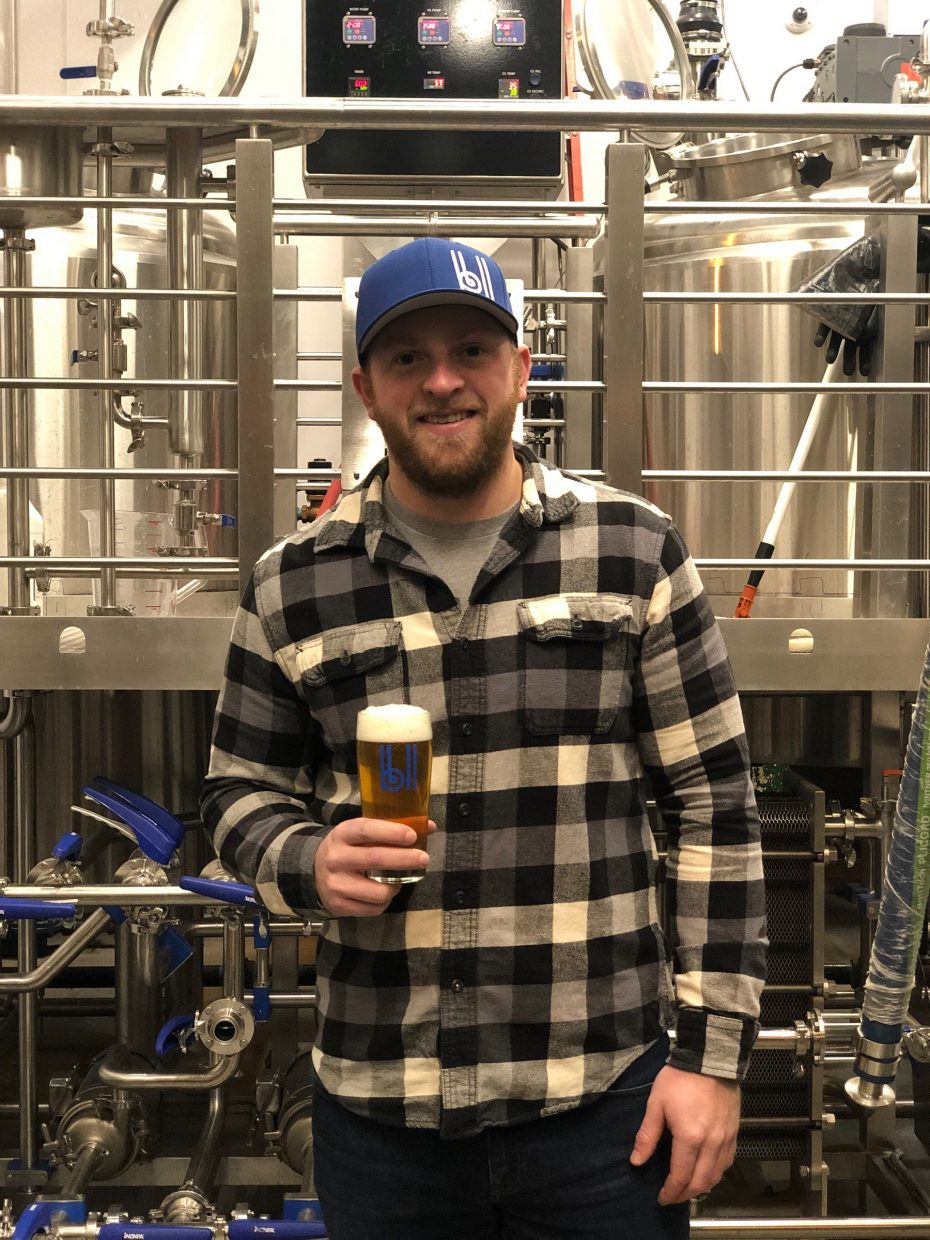 Erik Greiner is the head brewer at Belt Line Brewery. (via Belt Line)

Greiner, who admits a passion for brewing "boring" beers such as lagers and hefeweizens, released five standards in his first beer list, but he has the capacity to showcase 11 beers at one time; there will always be a line reserved for cider, he said. On the way are a Rye Nelson and an unfiltered pilsner, with his first sour to come fairly soon.

Though Greiner, 27, won't pick a favorite among his early releases, he said he's especially pleased with the Cross Cut. In rounding out the recipe, he called upon chocolate wheat malt, an ingredient he had been waiting impatiently to use.

"Cross Cut has a well-rounded flavor," Greiner said, before noting how his environment helped the cause. "Buffalo has a good water profile for [brewing] malty beers."

Like at Froth Brewing, which just opened on Military Road, Belt Line's introductory list embraces the hazy trend, as the opaque Not-Lanta, a New England IPA, delivers a dank-yet-slightly-fruity flavor.

Even the just-tapped Main Course, the flagship India Pale Ale, veers in the hazy direction. In what seems to be a trend among new Buffalo breweries, the IPA is not overwhelmingly bitter.

The Honey Kolsch, which sources from Bee Country farm in Darien, is a fine balance between the dryness of the style and the sweetness of the honey. The flight of beers sampled was clean and easily drinkable, an encouraging sign as Greiner moves forward in production.

[Related: Read about the background of the building at 545 Swan St.] 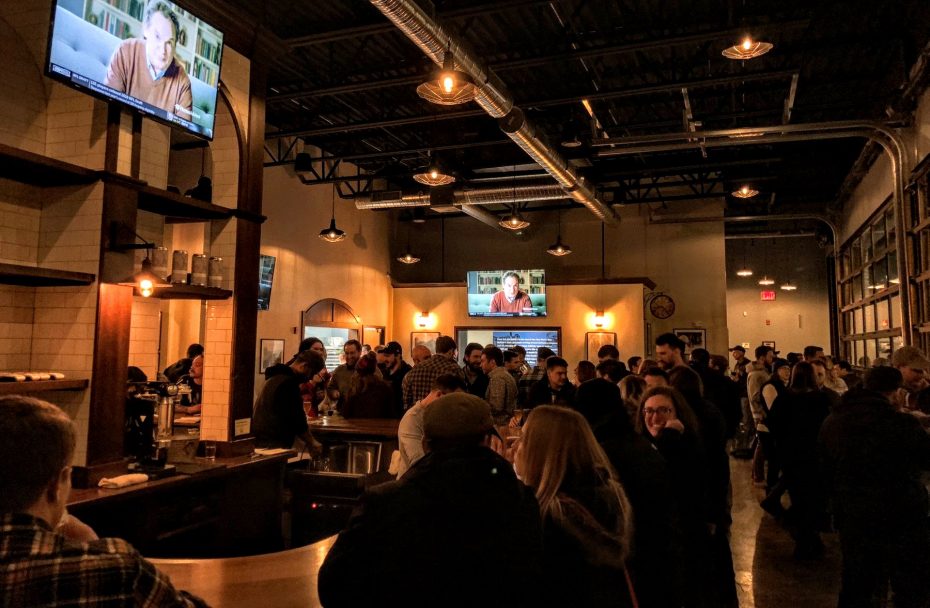 Greiner cut his teeth for four years as an assistant brewer at Resurgence, a West Side production brewery, before joining the Belt Line crew.

The benefits of the taproom approach include more creative freedom; Greiner can experiment as he pleases in tweaking the flavors and hops of the staple beers.

- Belt Line is a 10-barrel brewery, with two vessels, four 20-barrel fermenters and one Brite tank.

- The Belt Line kitchen is expected to be open in a few weeks. There has been no firm date released.

- Belt Line's fermenters and raw materials are visible at the entrance at Hamburg Street and Swan.

- For now, just Crowlers of Belt Line's beer are available for purchase at the taproom. 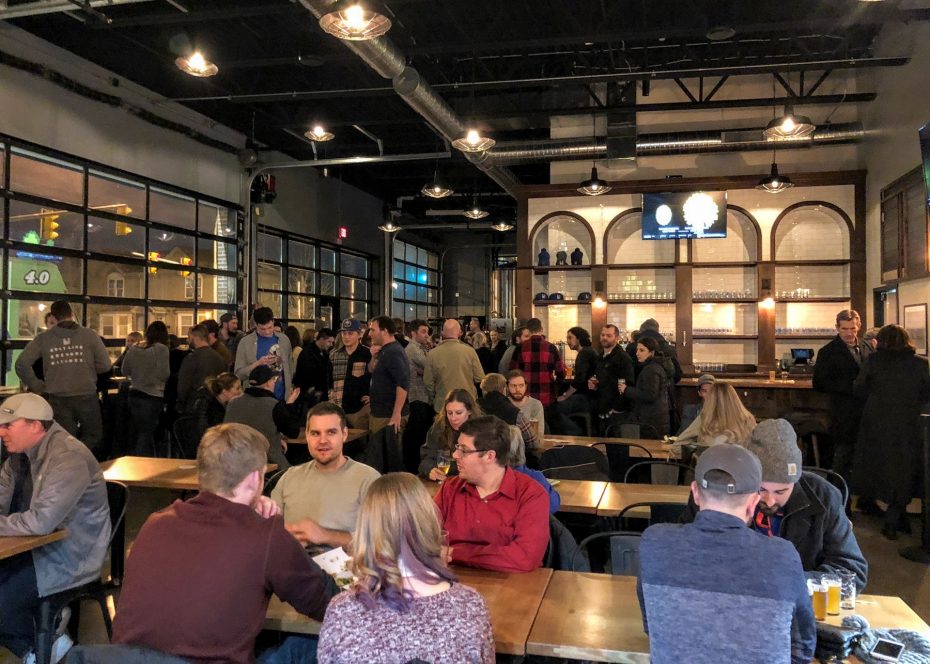 The view of the Belt Line taproom from the bathroom entrance. (Ben Tsujimoto/Buffalo News) 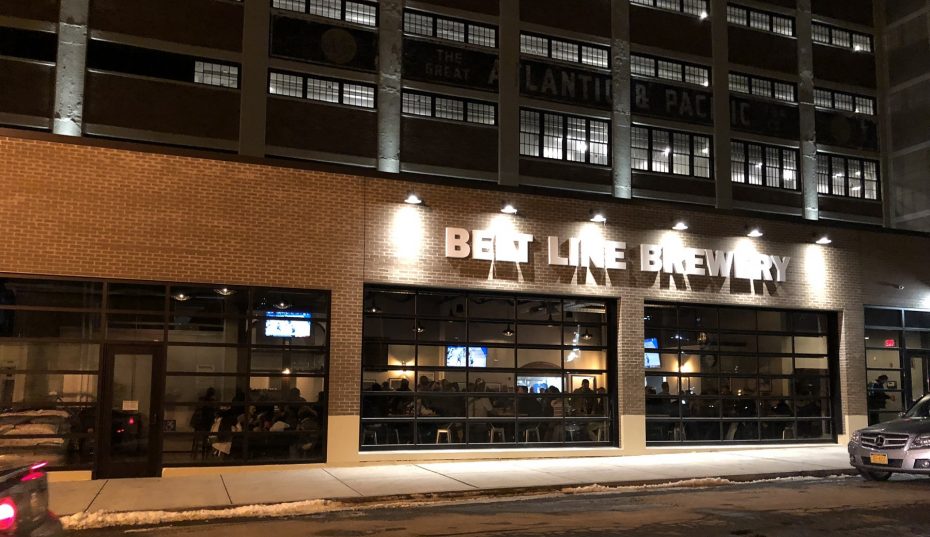