Johnson, meanwhile, said she’s looking for a candidate she can trust – which is why she has qualms about Gillibrand's transition a decade ago from a conservative to a progressive on issues such as gun control and immigration.

“It goes against that trusting thing I was talking about,” Johnson said.

Gillibrand came to Iowa, the first state in the presidential nomination calendar, knowing that a lot of voters don’t know her – and that some are suspicious of her.

So she addressed both challenges last weekend, introducing herself to Iowans as a dynamic progressive who has changed for the better, and one whose wins in upstate New York prove that she's positioned to beat President Trump in 2020.

“I know a little bit about what it takes to win in a place like this,” Gillibrand told voters in Des Moines.

Her message resonated with voters like Elijah Stines, 35, who heard Gillibrand stress her rural roots in an appearance in Boone, Iowa, population 12,510.

"I really like her passion," Stines said. "She's going to be one of the top people I consider."

Kirsten Gillibrand brings campaign to Iowa, and Iowans like what they see

"What's she running for?"

The biggest challenge Gillibrand faces came clear after she shook hands with four college students at the Scenic Route Bakery in Des Moines on Saturday.

As Gillibrand walked away, one of the students, Megan Sailstad, asked: “What’s she running for?”

Sailstad and her friends had no idea who Gillibrand was – and they are not alone.

Some 55 percent of likely Iowa Democratic caucusgoers told a pollster last month they were not sure how they feel about Gillibrand. In that Des Moines Register poll of 455 voters, only two named Gillibrand their first choice for president.

Iowa voters had much more fully formed and favorable opinions of several other presidential hopefuls, including Sen. Bernie Sanders of Vermont, Sen. Elizabeth Warren of Massachusetts and former Rep. Beto O’Rourke of Texas.

And in a national poll conducted for CNN last month, 55 percent of voters surveyed said they never heard of Gillibrand.

For that reason, Gillibrand ranks as a long shot for the nomination, said James E. Campbell, a political scientist at the University at Buffalo. 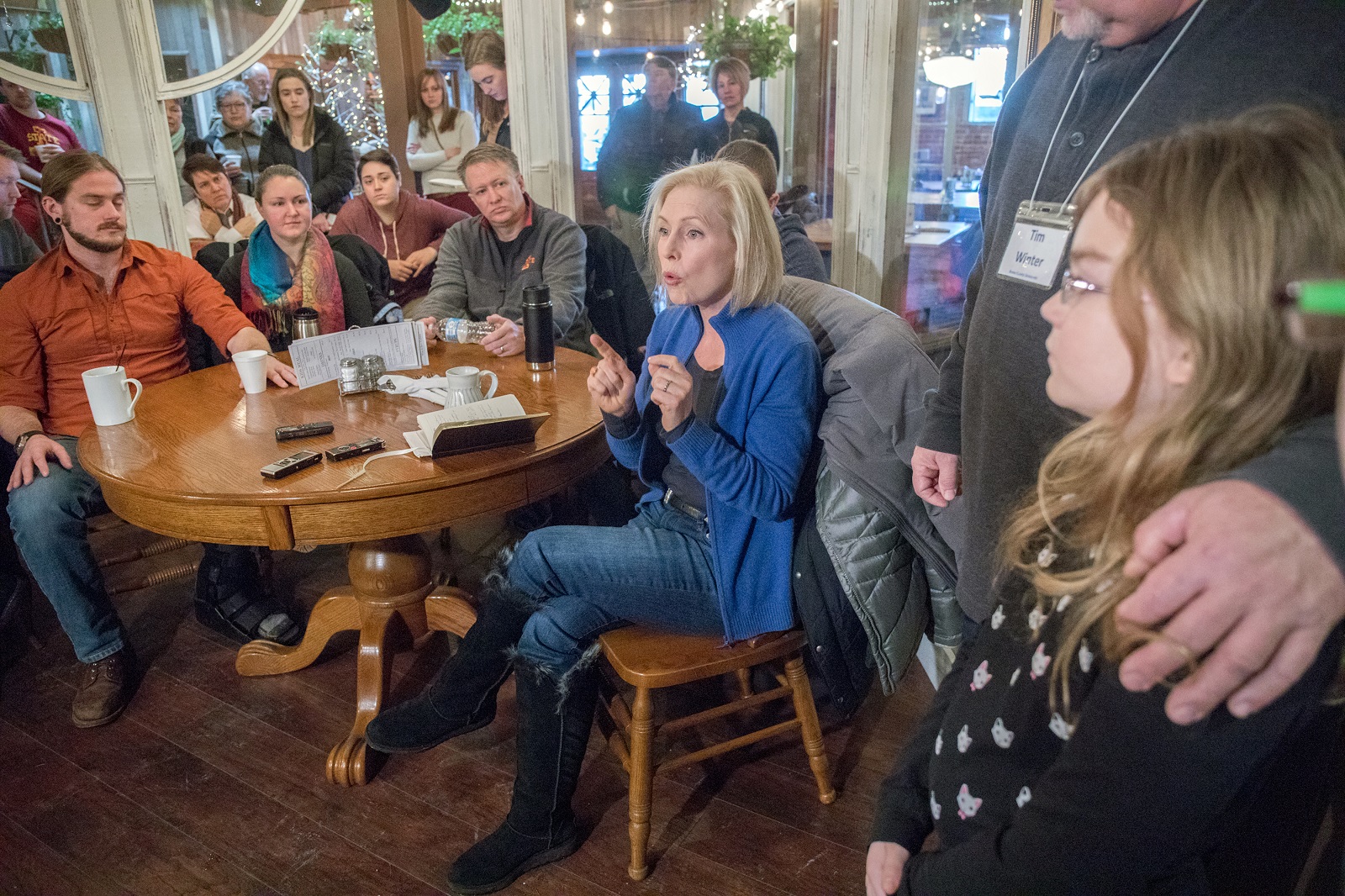 “I’d put her odds at slightly higher than Pataki’s in 2016,” Campbell said, referring to former New York Gov. George E. Pataki and his little-noticed bid for the Republican presidential nomination that year. Campbell said, though, that the emergence of Trump and Sanders that year shows that "anything can happen."

That's especially true in Iowa, a political petri dish where a strong message and a good organization can turn an also-ran into a contender, especially in a crowded field like the one Democrats will have in 2020.

Sanders pulled only 3 percent in polls four years ago, but nearly knocked off Hillary Clinton in the Democratic caucuses, noted Ann Selzer, a legendary Iowa pollster who conducted that December poll for the Des Moines Register.

“The beauty of Iowa going first is that anyone can come to Iowa and win,” Selzer said.

Sue Amosson knows a little bit about Gillibrand, and she doesn't like what she knows.

"I have reservations," Amosson, 73, of Des Moines, said last Thursday. "She was one of the ones who wanted Al Franken to resign, and she was also way more moderate in the House."

Those facts dogged Gillibrand throughout the first week of her presidential campaign – so she confronted them.

At a house party in Sioux City on Friday, Gillibrand said she had to call for the resignation of Franken, a popular Democratic senator from Minnesota, amid allegations that he inappropriately touched several women.

"You have to stand up for what's right, especially when it's hard," said Gillibrand, who led the Congressional fight against sexual assault in the military and college campuses.

Gillibrand had some explaining to do, too, about her transition from a House member who got an A rating from the National Rifle Association to a senator who backs gun control. She attributed the shift to a meeting with friends and family of Nyasia Pryear-Yard, a 17-year-old from Brooklyn who was shot to death in 2009.

"When I met this young woman's family, when I met her parents, when I met her classmates, those kids looked me in the eye and said: 'Are you going to do something to end gun violence?' " Gillibrand said in Des Moines. "And I said: 'Yes, I will.' "

Similarly, she told CNN that her anti-immigrant stance a decade ago was "not kind" and that it had to change once she became a senator representing a diverse state.

And change it did. She told the crowd in Des Moines that the refugee influxes in cities such as Buffalo and Rochester prove that immigration is good for America.

"These communities have only created growth," she said.

Iowans probably won't make too much out of Gillibrand's shifting stances, said J.D. Scholten, a Democrat who ran for Congress in northwestern Iowa last year and lost to Republican Rep. Steve King.

"Every candidate has a vote they probably either regret or that doesn't play well everywhere," said Scholten, who noted that Gillibrand connected with voters she spoke with in Sioux City.

Voters didn't ask Gillibrand about her reversal on her vow, renewed only last fall, to serve the full Senate term she was elected to in November.

Asked about that, Scholten said: "That's something she's going to have to talk about."

'I plan on being here a lot'

“I am not a national name, so the fact that you all came out to meet me is a blessing to my heart,” Gillibrand told a crowd of about 150 at the Stomping Grounds coffeehouse in Ames, an Iowa college town. “I plan on being here a lot.”

But on-the-ground appearances make up only part of the effort to win the Iowa caucuses, a byzantine event that requires voters to spend hours on a winter night lining up in support of their favorite candidate.

The ability to raise money – for advertising, staff and travel – is key, too. Gillibrand has $10.5 million left over from her 2016 Senate race, meaning she starts her presidential campaign with more money than any Democrat except Warren, who has $2 million more. 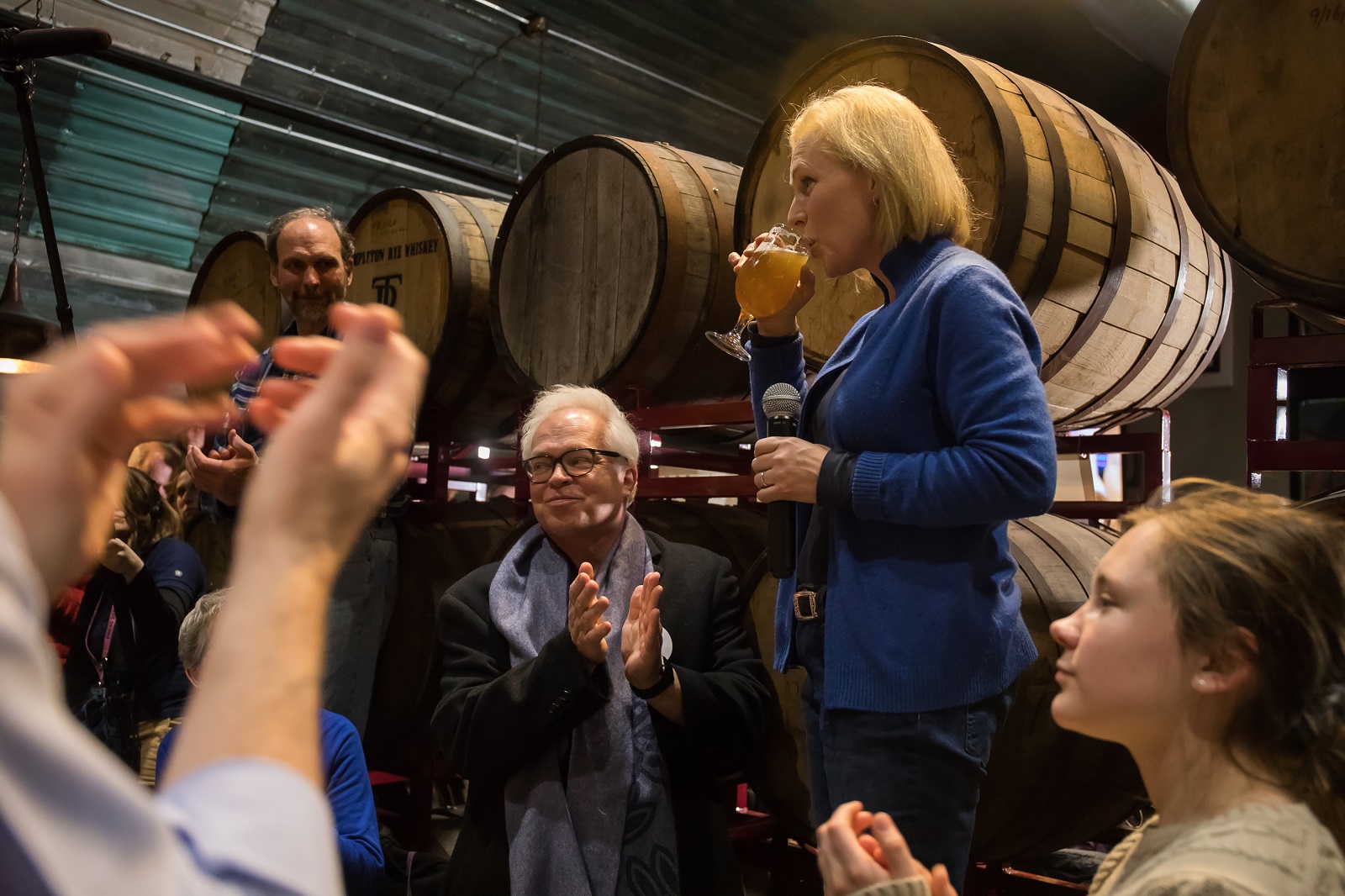 Gillibrand also has a robust base of private donors built through her effort to boost women in politics.

"She can afford gasoline for the engine," said Jerry Crawford, a lawyer who has been involved in Iowa Democratic presidential campaigns for decades.

Gillibrand is behind Warren, though, in what local political pros call the "staff primary." Warren has already made several impressive Iowa-based hires, Crawford said.

Most other campaigns, including Gillibrand's, are interviewing potential Iowa staffers.

Gillibrand did hire several well-regarded national operatives, and they planned a weekend of events that drew an unexpectedly large crowd in Des Moines and that highlighted Gillibrand's strengths on the stump.

The senator repeatedly stressed how much Iowa is like upstate New York – where, she noted, she amassed record-breaking vote totals even in red counties.

She drew cheers with taunts aimed at President Trump – who, she said, "only cares about himself."

At the same time, she proved her bipartisan credentials with a laugh line she repeated in nearly every stop, invoking the name of a fellow senator with a notoriously unpleasant reputation.

"I worked with Senator Ted Cruz to end sexual harassment in Congress," Gillibrand said. "I can work with anybody."

She teared up in Ames and Des Moines when discussing a constituent who lost her children in Hurricane Sandy, posed and smiled for hundreds of selfies, and literally jumped for joy in Des Moines when a voter handed her a T-shirt that said: "Power is the new pretty."

Many voters – even the one who couldn't pronounce "Kirsten" – said they came away impressed.

"She's pretty dynamic," Butler-Klein said. "I want to research her and follow up more. She just radiates."