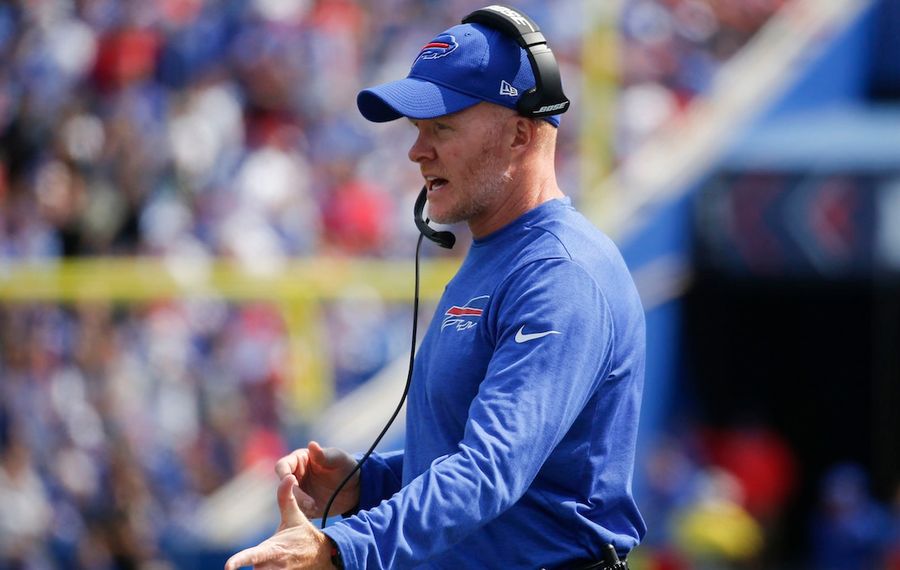 Credit the Buffalo Bills’ coaches with squeezing every ounce of pass-rushing potential out of the team’s defense in 2018.

The Bills didn’t have any player ranked in the top 35 in the NFL in sacks. And they were as judicious as ever about blitzing. The Bills blitzed on 22.4 percent of quarterback drop backs, according to News figures. They ranked right in the middle of the league in blitzing, 16th, according to ESPN’s "NFL Matchup" staff.

The Bills’ 36 sacks on the season ranked only 26th in the league. That’s misleading. The Bills faced the second fewest pass attempts in the NFL in 2018 (which, obviously, helped them allow the fewest passing yards).

Yet the Bills found a way to be disruptive.

“I was fairly pleased with the pressure we’ve generated, not always getting sacks but speeding the quarterback up,” said Bills defensive coordinator Leslie Frazier. “I think if you look at the percentage of completions, you’ll see that reflected in those numbers, and the fact we’re No. 1 in pass defense.”

The Bills were 11th best in completion percentage allowed (63.6) and third best in passer rating allowed (82.6).

“We’re generating pressure, maybe not always getting the sack,” Frazier said. “You’d love to be able to get the sacks, but the way some of the quarterbacks we’ve faced get it out you may not necessarily get them on the ground. But you can speed them up.”

The Bills were effective without an elite edge-rushing combination, like the Chargers have in Joey Bosa and Melvin Ingram or the Broncos have in Von Miller and Bradley Chubb or the Texans have in J.J. Watt and Jadeveon Clowney.

But that’s not to say Sean McDermott and Frazier did it with mirrors. Jerry Hughes is an elite, edge-bending speed rusher. He had seven sacks and led all edge-rushing starters by getting pressure on 19.7 percent of his rushes, according to Pro Football Focus.

Shaq Lawson and Trent Murphy, rushing opposite of Hughes, combined for eight sacks.

For the second straight year, the Bills led the NFL in fewest pass plays of 40-or-more yards allowed. They gave up only two, a 43-yarder on a rare coverage bust in Green Bay and a 40-yarder to Detroit’s Kenny Golladay in Week 15. The only NFL teams to not allow a 50-yard completion were the Bills, the Ravens and the Chiefs.

The only year in which the Bills allowed fewer 40-plus passes was their last Super Bowl season of 1993, when they gave up one in the opener and none the rest of the season.

The Bills also led the NFL in fewest 20-plus passes allowed (36).

The Bills blitz (rush five or more men) enough to keep offenses honest but are not going to gamble and expose themselves often to big plays.

It’s the core defensive philosophy of McDermott and Frazier. Their success is aided by the fact they have two high-quality safeties in Micah Hyde and Jordan Poyer, who are assignment-sound.

Only eight of the Bills’ 36 sacks came on blitzes. But the Bills’ blitz was effective. Buffalo held foes to 52.7 percent completions, a passer rating of 65.0 and 4.7 yards per play when they blitzed.

Like most defenses, the Bills generally blitzed lesser or less-experienced QBs more than top veteran QBs. But it depends on the situation. In the first meeting with New England, the Bills blitzed Tom Brady on two of 48 drop backs. In the second meeting, when New England’s receiving corps was depleted, the Bills blitzed 33 percent (9 of 27).

Frazier said he’s not particularly focused on his blitz rate or his sack total. It’s more about pressure.

“I don’t care about that,” he said. “What I care about is are we affecting the quarterback, whether it’s with four, five or six. Are we making him throw when he doesn’t want to throw? If you can speed him up and create inaccuracies, you’re doing pretty good.”

When the Bills blitzed on third down, opponents converted only 27 percent.

When the Bills didn’t blitz on third down and the opponents passed, they converted a still-low 33.8 percent.

The Bills did not have an easy schedule, particularly in the first half of the season. It was the ninth toughest overall schedule, according to Sharp Football, factoring in overall efficiency of the opponents on offense and defense.

However, it was an easier schedule for defending the pass. Based on the season-total passing yards by the opponents, it was seventh easiest in the NFL.

Yet even relative to the competition, the Bills’ defense dominated opposing passing games more than any other team. The Bills held opponents an NFL-best 47 yards per game under their passing average. Baltimore and Jacksonville were next best at holding foes under their average.

The defenses that allowed teams to perform most over their average: Kansas City, Houston and the Jets. That’s relevant for Houston, which played a lot of close games, and the Jets, who played poorly. It wasn’t quite as big a deal for the Chiefs, who protected big leads much of the year and gave up garbage yards in some games.

The Bills’ defensive success came despite the fact Buffalo opponents had the best average drive starts in the league.

The average drive start against the Bills’ defense was the 31.6.

The Bills were second last in the league in giveaways, with 32, which included 23 interceptions, also second most in the NFL. The giveaways turned into 105 points against.

Last year the Bills had the sixth fewest giveaways, which led to only 55 points against.

The Bills’ defense gave up 61 points on 11 drives when bad special teams sent them out onto the field in their own territory.

The Bills ranked 18th in the league in points allowed. They would have allowed a lot fewer if the other two phases of the game (offense and special teams) pulled their weight.

One area where McDermott and Frazier will look to improve in the offseason is red zone defense. The Bills were 30th, allowing touchdowns on 70.8 percent of opponent trips inside the 20. Only Tampa and Kansas City were worse.

The fact so many drives started in Bills territory was part of the problem.

Trouble at cornerback was another factor. The duo of Philip Gaines and Vontae Davis (for one half) struggled over the first half of the season. Levi Wallace played well at corner the last seven games. But the fact nickel corner Taron Johnson was hurt the last four weeks gave Frazier less coverage flexibility, because it took away a quality man-coverage defender.

The red zone also is the area where another speed rusher to complement Hughes would help. The pass gets out quicker in the red zone, and quick pressure with four men is even more important closer to the goal line.