Jane Austen’s 1811 novel, “Sense and Sensibility,” spins across the stage with playful effervescence in Kate Hamill’s adaptation, now being performed at the Irish Classical Theatre Company.

First produced at the Bedlam Theatre in New York City in 2014, the original director, Eric Tucker, put his indelible mark on the piece when he equipped all of the chairs and tables with rolling casters. Austen’s staid tale of a “tug of war” between love and social propriety thus careened into a whirlwind of contemporary theatricality.

At the Irish Classical Theatre Company, director Chris Kelly picks up Tucker’s minimal aesthetic and high-paced concept. The gesture is a perfect fit for the circular Andrews Theatre where minimal staging is a necessity. Indeed, the Andrews Theatre has never been used to better effect.

In the opening moments, using a variation on Tucker’s original device, Kelly deploys a delightfully chosen pop tune to signal that this may be Jane Austen, but you are free to laugh with hearty abandon.

“Sense and Sensibility” is the sprawling story of sensible Elinor and sensitive Marianne Dashwood, who live with their parents and younger sister on a large country estate in Sussex. When their father unexpectedly dies, the property passes to his son, John, from a previous marriage, leaving the family with precarious finances. John promises his father that he will “provide” for his half-sisters, but his jealous and grasping wife, Fanny, convinces him to renege.

In typical Jane Austen fashion, the prosperity of these charming young women is now dependent upon making advantageous marriages. 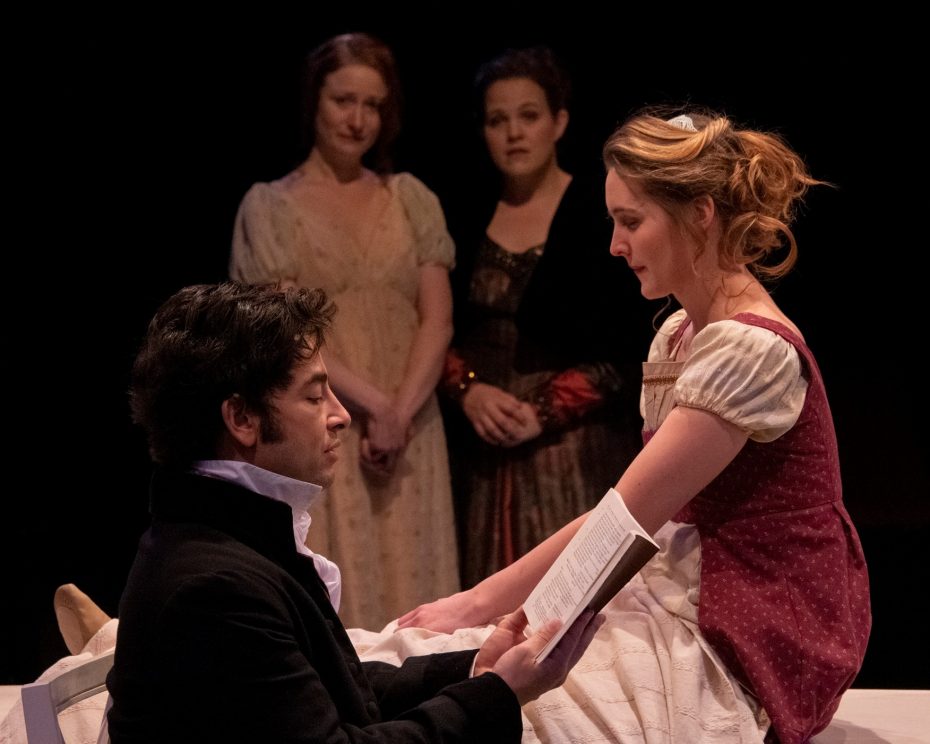 "Sense & Sensibility" is presented by the Irish Classical Theatre Company from Jan. 18 to Feb. Feb. 10. (Photo by Gene Witkowski)

Luckily, the Dashwoods are able to rent a humble but comfortable cottage on the property of Sir John Middleton, a distant relation to Mrs. Dashwood. Here, Elinor and Marianne Dashwood will trod a path of romance, heartbreak, and romance restored – the hallmark of Jane Austen.

Chris Kelly’s transfer of the Hamill–Tucker concept into the round is delightful. We are treated to Jane Austen as seen through a kaleidoscope of twirling images. This is deployed very effectively when the world of societal gossip literally surrounds the circular stage.

At moments of humiliation for Elinor or Marianne, actors line the periphery, and like a Greek (or Georgian) chorus, whisper a cacophony of invective and judgment.

The production creates the illusion that everything we see is being invented spontaneously. Rainy weather is created with snapping fingers and patting of the actors’ hands against their bodies. Actors become dogs and horses; gardens and forests.

All of this is cleverly highlighted with ingenious sound design by Tom Makar; set design by Dyan Burlingame; costumes by A. Lise Harty; and wigs by Susan Drozd.

Actors are always ready to become any of countless characters with breathtaking speed. Typically, each actor plays a central character with steady reality, and a number of secondary characters who are interpreted as cartoons. This distinction keeps the central plot line clear.

This lightness of tone permeates the production, often even at moments of emotional intensity and romantic excess. The contrast between characters is clear, but this is not always true of fluctuations in dramatic intensity.

Kristen Tripp Kelley and Renee Landrigan are exquisite as contrastingly sensible and sensitive Elinor and Marianne Dashwood. Despite the abundance of dashing male suitors in this play, the central love story is really between these two sisters. This point is driven home repeatedly, including in the play’s final image, which is extended into the curtain call. The Misses Kelley and Landrigan are palpably charismatic and establish both the contrast and the bond between their characters.

The suitors, on whom so much in a Jane Austen story depends, are marvelous. Each holds a secret that helps drives the plot. Each suffers beautifully for love. In addition to Mr. Moran as both Edward and his brother Robert Ferrars, Anthony Alcocer and Brendan Didio are perfection as steady Colonel Brandon and dashing John Willoughby, who both have an eye for imprudent Marianne. Each also appears as other characters, convincingly enough to create the illusion that the cast of this show is far larger than it is.

Completing the ensemble of 10 are two of Buffalo’s most skillful character actors, Josephine Hogan and David Lundy, who play Sir John and his mother-in-law, meddling but well-intentioned Mrs. Jennings, adding marvelous humor and affection to this very lovable show.

Fast-paced and irresistibly appealing, “Sense and Sensibility” provides a luxurious evening of humor and romance.