As a teenager in Wyoming County, Cody Lutz used to get so much snow at his home in Bliss that he could pile it high enough to snowboard from atop a shed out in the yard.

At the time, he hardly imagined a snowman would one day provide him with a burst of national attention.

Yet that is happening this week at his home in Petersburg, Ky., after the mischief-minded driver of a 4 x 4 – at least going by the tracks left in the yard – chose the wrong snowman as the object of a prank.

Lutz, 26, moved seven years ago to Kentucky, where he serves with a Christian ministry and runs his own photography business. His fiance, Lucy Sandifer, was visiting from Mississippi. She had never seen snow in any significant amount. 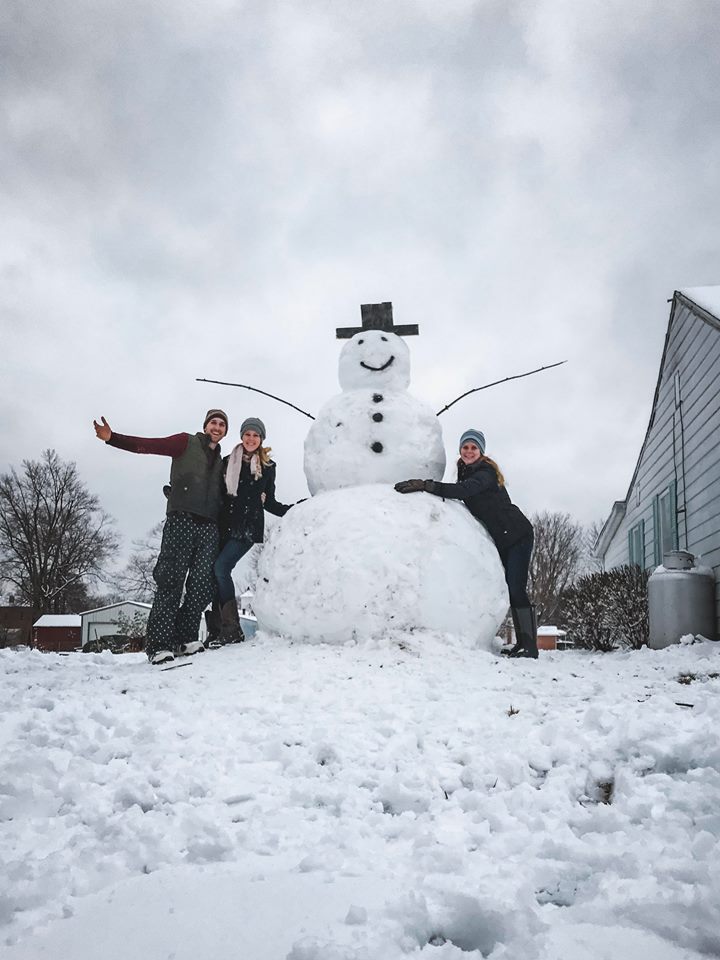 Cody Lutz, left, and his fiancee, Lucy Sandifer, with Lucy's sister Laura, right, and their snowman. (Used with permission of Cody Lutz Media)

Inspired by a weekend snowfall of 6 inches, Lutz and Sandifer decided to make a snowman. They used a big tree stump in the yard as a foundation, and built a snowman that stood a solid 9-feet tall. In an area where such creations are not exactly common, their work brought many waves and beeps from people driving past.

It also apparently led to one wrong choice. Lutz returned home from work Monday to note that someone, apparently in a 4 x 4, decided to drive across the lawn and plow the snowman into nothing.

The effort failed. The driver was not aware of the stump. While the vehicle was long gone when Lutz arrived, the snowman clearly won the decision. An amused Lutz posted a photo and told the tale on Facebook, and it quickly gathered steam. Next came a visit from a television reporter with the Fox affiliate in Cincinnati, and before long the tale was spreading across the nation.

Lutz said he has no animosity toward the driver, and thinks they would even laugh about it if they ever met.

"The Bible says you reap what you sow," Lutz said, "and sometimes that can happen in funny ways."