Saturday is the anniversary of what evolved into one of Buffalo’s most impactful snowstorms, the roaring Blizzard of ’85. That’s the storm which prompted Mayor Jimmy Griffin to make his "grab a six-pack” remark, and which paralyzed Buffalo for nearly a week.

[Don Paul: Remembering the 'Six-Pack Storm,' the Blizzard of '85]

This weekend’s storm, which has resulted in a winter storm warning for all of Western New York from late Saturday morning through Sunday afternoon will not be a replay. If there is to be a Blizzard of 2019, it will have to be another storm.

A trend which began midweek has continued in later model runs.

Here is what I wrote in Wednesday’s Buffalo News: “What I can tell you is overnight model runs have pretty good agreement the track of the center of this low pressure system has shifted south, close to 50-75 miles south of previous model runs. IF that trend continues in future model runs, and there are many to come (some models run every six hours, others every 12, and high-resolution models closer to the event run every three hours), snowfall totals would be somewhat less than in Monday overnight and Tuesday model runs.”

The southward shift is still appearing in latest model runs today. So, despite the winter storm warning for heavy snow and blowing snow, I believe the numbers have to come down in the metro area at least a modest amount.

However, this is not to imply this will be a nonevent. It will simply be a winter storm which lacks the impact of a monster.

There will still be blowing snow, reduced visibility and drifting. As I’ve stated repeatedly, winds will not be strong enough to produce blizzard conditions (three consecutive hours of sustained winds or frequent gusts of 35-plus mph, and frequent visibility of a quarter-mile or less). The winds are more likely to be in the range of 15-25 with occasional gusts to over 30. Windiest locations will be near the shores of Lake Ontario and southwest of the metro area along Lake Erie, especially Saturday afternoon and night, dropping back a bit during Sunday.

Here are National Weather Service probability estimates for snowfall of 12 inches or greater from Saturday into early Sunday:

Those probabilities are painted with a broad brush. I’ve shown you what are called global models in previous articles, which have to be lower resolution. Now we are into the time frame in which we can use high resolution, more detailed models. High resolution models aren’t automatically superior on storm track and in the big picture. But they can offer detail global models simply can’t see. Here is such a model’s depiction of conditions at 10 p.m. Saturday night.

You have to look all the way to the bottom of the frame to find the center of low pressure, near the Tennessee-North Carolina border, which is farther south than global model runs earlier in the week. Still, the reach of this low is very expansive. The heaviest snow is well south, where you see the dark blue. That will be more moisture-laden, heavy snow closer to the the storm’s warmer air. Our snow will be lower density in the colder air – more “fluffed up.”

A little moisture can go a long way in polar air. We’re not going to receive anything like 1 inch of liquid with this storm and its lower density snow. But the ratio of snow to liquid on the Niagara Frontier with this storm will be about 20:1, or 20 inches of snow to 1 inch of liquid. Ratios like these are quite common in polar air, sometimes reaching 30:1. The ratio may be a little lower closer to Pennsylvania, where temperatures won’t be quite as cold.

The next feature I’d like you to look at is the somewhat darker shade of blue across much of the Niagara Frontier. That is the model picking up on some of the Lake Ontario enhancement of the general snowfall with these gusty northeast winds.

The reality will probably be thinner tendrils of lake enhancement, with uneven coverage. This means some locations north and northeast of the city may receive considerably more accumulation, up to 12-15 inches. Buffalo itself will be less likely to receive the enhancement from the north, nor the heavier snow closer to the storm to the south, so the city may see 8 or 9 inches. Amounts could again be in the range of 12-15 inches in the Southern Tier, with heaviest amounts to the southeast toward Olean and Wellsville.

They didn’t ask me, but I have no real quarrel with my colleagues at NWS Buffalo, who continue to work diligently with dedication to your safety without pay. 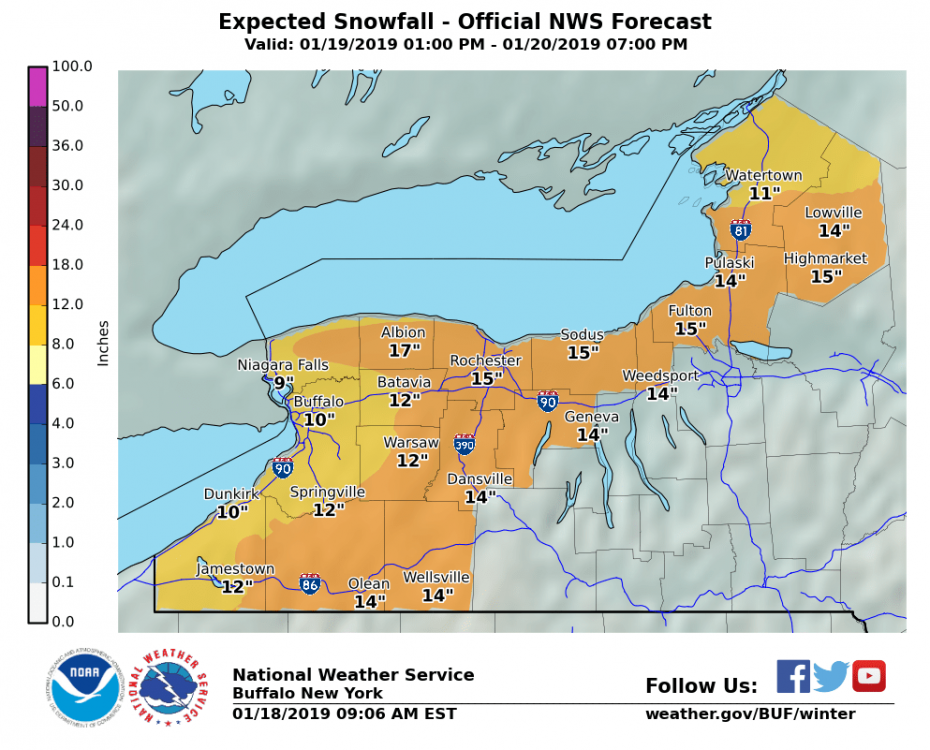 I wouldn’t be shocked if some of that heavier orange enhanced area might reach a bit farther west in Niagara County and south to Tonawanda Creek, but let’s not nitpick here.

We often agonize over exact measured inches. The truth is, when we experience moderate to heavy snow with 15-25 mph winds and higher gusts, the difference in impact on your driving safety between, say, 9 inches and 12 inches is nil. There will be blowing and drifting, reduced visibility and uneven coverage.

The heaviest snow should wind down fairly quickly on Sunday, but we will still suffer from frigid temperatures and a bitter wind chill.

Sunday afternoon temperatures will slowly fall through the single digits, with a wind chill of -10. Maybe you can light a fire and watch the ice bowl in Kansas City. It will not be nearly as frigid there as here but, as ever: Please, no wagering.