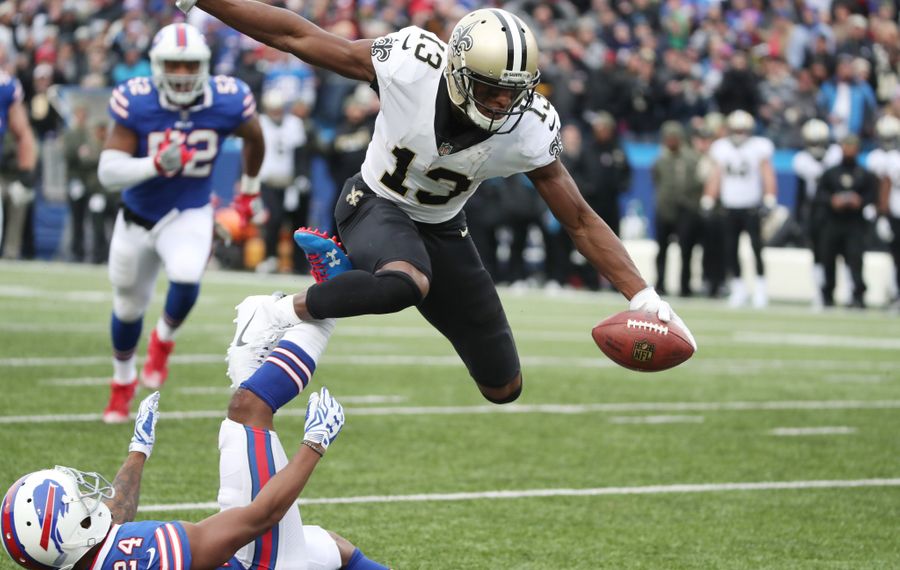 The National Football League was presented with a few memorable games in the 2018 season just when they were needed to divert the attention being given to off-the-field controversies.

One was the New Orleans Saints' 45-35 shootout win over the Los Angeles Rams on Nov. 4. Another was the New England Patriots' 43-40 win over the Kansas City Chiefs on Oct. 14 in Foxborough, Mass.

Sunday's conference championship games are rematches of those classics, promising to close, high-scoring games. One key difference, the Chiefs-Patriots venue will be Kansas City, not Foxborough.

The handicappers have the Saints and Chiefs 3 to 3.5-point favorites which means they rate the teams essentially even but give the usual 3-point edge to the home team.

The scoop on the Rams: There's a perception that the Rams' offense slowed down the last third of the regular season. It probably stems from a loss at Chicago when L.A. scored six points and gained only 214 yards. That was an outlier. With Jared Goff at quarterback, Robert Woods on the receiving end and Todd Gurley carrying the ball, the Rams gained 400 yards or more in five of their final eight games. The only change was that injured WR Cooper Kupp was lost for the season. ... Goff passed for 32 touchdowns and a 101.1 rating, and Gurley led the league with 17 rushing touchdowns despite sitting out the last two regular-season games. He averaged 4.9 yards per carry. When Gurley went out, the Rams signed free agent C.J. Anderson, former running back for the Denver Broncos, Carolina Panthers and Oakland Raiders. He ran for 123 yards in last week's win over Dallas. ... NFL sack leader Aaron Donald (20.5 sacks from his tackle position) leads the defense. The Rams have top corners in Marcus Peters and Aqib Talib. One could draw the assignment of shadowing NFL receptions leader Michael Thomas, who had 125 catches in the regular season and caught 12 for 171 yards in the playoff win over the Eagles last week.

The scoop on the Saints: Many prognosticators believe it will be close to impossible for a team to beat the Saints in a playoff game at the Mercedes-Benz Superdome. New Orleans is 9-10 overall in postseason games, 7-3 at home. New Orleans hasn't lost a home playoff game since 1992. ... There is some concern that Saints QB Drew Brees is playing with an injury. He passed for fewer than 300 yards in five of the Saints' last eight regular-season games and he airmailed an interception on his first pass against the Eagles last week. New Orleans got back into last week's game with a masterful 18-play, 92-yard touchdown drive in the third quarter that took 11:29 off the clock. It was not vintage Brees passing. Also, the Saints' passing game is concentrated on Thomas. Approximately one of every three New Orleans pass completions have gone to Thomas. What balance the Saints have comes in the form of running backs Alvin Kamara and Mark Ingram. Kamara has run for 14 touchdowns and a 4.6 yards per carry average. He is a receiving threat. ... New Orleans will have to deal with a strong Rams running attack without injured DT Shelton Rankins. David Onyemata, a Canadian with starting experience, will replace Rankins (torn Achilles). They signed free agent Tyrunn Walker this week to replace Rankins on the roster.

Outlook: The Rams have better balance. If they contain Thomas and get pocket pressure on Brees, they can quiet the Dome crowd. Rams, 33-30.

The scoop on the Patriots: It seems most of America outside of New England roots against the Patriots. It's sort of the way people, especially media, rooted against the Bills going back to a fourth straight Super Bowl in the 1990s. ... New England has not won a true postseason road game since 2006 at San Diego. The Patriots have played 38 postseason games with Bill Belichick as coach and Tom Brady at quarterback. They have won 28 (20 at home, 3 away and 5 neutral sites). Three of the 10 postseason losses were at home, four away and three at neutral sites (Super Bowls). ... Belichick and his staff thoroughly outcoached Anthony Lynn and the Chargers last week. It might be more difficult to outscheme veteran Andy Reid and the Chiefs with all their weapons and a vocal home crowd. New England riddled the Chargers with short passes to Julian Edelman and running back James White. They should tests the Chiefs' speedy linebacker group. New England's defense is overlooked but the Chargers could do little against it last week. L.A. had trouble in pass protection and getting open against an experienced Patriots' secondary.

The scoop on the Chiefs: Kansas City allowed 405.5 yards per game during the regular season, but the defense throttled Andrew Luck and the Colts last week. The Chiefs' pass rush has always been something to fear at home because of crowd noise. Kansas City had 52 sacks in the regular season, 32 of them at Arrowhead. ... Only once in his first season as starter did Mahomes fail to throw a touchdown pass. He had four or more TD passes in six regular-season games. Fourteen of his 50 TD passes were for 20 yards or more. Ten went to TE Travis Kelce, who had 103 receptions. More dangerous was speedy WR Tyreek Hill, who has 12 TD catches, five for 50 yards or more. ... The Chiefs fired RB Kareem Hunt, a productive runner and receiver, after 11 games but have compensated for the loss of an important weapon by signing free agent Damien Williams, who had a tryout with the Patriots in 2017. They chose to sign ex-Bill Mike Gillislee. ... Chris Jones leads the Chiefs with 15.5 sacks, but outside linebackers Dee Ford and Justin Houston may be more dangerous.

Outlook: Snow is expected in Kansas City on Saturday, but the forecast for game day is not as dire. Game-time temperature is expected to be around 20 degrees. ... It will be interesting to see if Belichick is the first coach to come up with a defensive plan that will keep Mahomes-Hill-Kelce from running wild. Chiefs, 30-27.

Last week: The Chiefs, Rams and Patriots covered the spread. The Saints, an 8-point favorite over the Eagles won by only six. Two games went over and two went over.