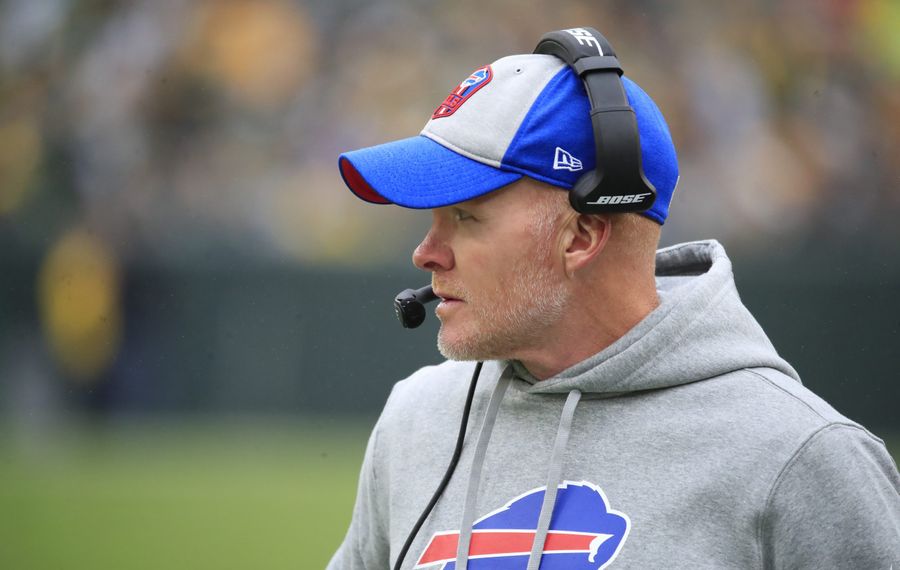 Sean McDermott hasn’t been shy about making changes to his coaching staff during his two years leading the Buffalo Bills.

The Bills have made seven changes to their coordinators or position coaches since McDermott took over. That starts with offensive coordinator Rick Dennison being fired after one year and special teams coordinator Danny Crossman being let go earlier this month. The list also includes wide receivers coaches Phil McGeoghan and Terry Robiskie, offensive line coach Juan Castillo, secondary coach Gill Byrd and defensive line coach Mike Waufle, who retired after the 2017 season.

When compared to other head coaches hired in 2017, McDermott has made the most changes. For example, the San Francisco 49ers have made four changes under Kyle Shanahan, counting a new strength coach and head trainer, both of whom were fired this month along with the defensive line coach. Additionally, the 49ers’ defensive backs coach left for a new job.

In Jacksonville, former Bills coach Doug Marrone made a flurry of changes to his staff after the Jaguars plummeted to a 5-11 season a year after playing in the AFC Championship game. Marrone fired five assistants either during the 2018 season or immediately after it, including offensive coordinator Nathaniel Hackett.

The Chargers and Rams, the other teams to hire coaches prior to the 2017 season, have made minimal changes to their coaching staffs. Matt LaFleur left the Rams after one season to become the Titans’ offensive coordinator so that he could call plays, and an assistant special teams coach left for a promotion. The Chargers had three coaches leave Anthony Lynn’s staff for promotions, including Jamestown native Nick Sirianni, who went from wide receivers coach with the Chargers to the Colts’ offensive coordinator.

Of course, there is a key difference between the Chargers and Rams when compared to the Bills, 49ers and Jaguars: Winning. Changes are inevitable in the NFL when teams struggle the way Buffalo, San Francisco and Jacksonville did in 2018.

“I would say it's probably about par,” Bills General Manager Brandon Beane said of the changes to the coaching staff in two years. “You know, what's hard is, when you come in as GM or head coach, people are under contract, and sometimes you can't get – you might have five guys that you want to be your coordinator on this side of the ball, or your O-line coach, or whoever – but you couldn't get them because they're under contract. So you're constantly trying to keep up with that.”

That appears to be the case when looking at the change McDermott made at offensive coordinator after his first year. It was widely reported that the Bills were interested in Mike McCoy, Brad Childress and Greg Olson before Dennison was hired, but they weren’t able to get them.

“Maybe sometimes you find a guy who wasn't your top guy, and you go, 'Man, this guy's really good' and then there are some times there's guys you knew across the league, you saw them and thought they'd be a good fit, but then you get them in and you go, ‘Maybe it's not as clean a fit as you imagine.’ You are trying to tweak it,” Beane said. “You'd like to get it to where you're not losing guys except for a big promotion. I think we're getting there. It's a tweak here and there you're trying to make.”

The changes this year at offensive line coach and wide receivers coach come after Brian Daboll took over the offense.

“This was Brian's first year as the OC, so we're making a couple tweaks on that side of the ball,” Beane said. “He came in and pretty much had to inherit the staff we had in place. We said, 'Hey, let's give everybody a chance and see how it goes.' Then we just decided to make a couple moves.”

McDermott is expected to address his staff changes next week when he speaks to the media at the Senior Bowl. Beane, though, said he’s not worried about the turnover.

“You're always trying to get better,” he said. “If you feel like you're not performing at a peak level as a group, then you've got to look at the areas you can adjust and that's one of them. Listen, until we get it exactly right, we'll continue to look. I don't ever think you'll see Sean and I settle for anything. Players, any of my staff, his coaching staff, whatever, we want to be the best in every area and if we feel a move can make us better, you know, we can't be afraid to make that move.”

Beane on a ‘misnomer’

The Bills’ acquisition of CFL wide receiver Duke Williams was a mild surprise in the sense that he might not fit the “character” profile the team looks for. Beane, though, wanted to set the record straight.

“We're not looking for all choir boys, either. I think that's a misnomer,” he said. “We're looking for team guys. Selfless guys. Those come in all sizes and shapes, come from different backgrounds. At the end of the day, it's a people business, and you've got to find people that are willing to buy into what you're trying to do. If they don't, now they're pulling away from the rest of the group. That's what we're trying to weigh.

“You hear noise about, ‘Why isn't this team going for this player or that player?’ It may not be the skill set. It may be the fit. Scheme fit, culture fit. Maybe there's some things that you go, 'Man, we've heard, it's all about him, it's not about the team.’ Even though he's a good player, he just won't be a great fit for your team.”

Investigating that is a tricky part of the job of an NFL general manager.

“With anybody you're looking to acquire, whether it's a guy going into free agency or you're hearing is available via trade, you find out who knows this guy. You look on your staff – has anybody been around this guy? If you don't have that, then you start calling people that don't have any skin in the game,” Beane said. “Obviously, you've got to be careful when you're doing that. You just try to use your resources the same way we do in free agency. That's the hardest part about free agency, is making sure you're not paying somebody, bringing in somebody that's not a fit. It's not an exact science. If you do it enough, you're going to be wrong sometimes, and you've got to be willing to admit it. You know what, we went out and acquired this guy and athletically he's a good player, but he just didn't fit our locker room and it's time to cut bait.”

NFL rules prohibit Beane from commenting on players under contract, but digest those answers and ask yourself if it sounds like acquiring disgruntled wide receiver Antonio Brown from the Pittsburgh Steelers feels likely. In my mind, it doesn't.

Bills fans will love this answer from linebacker Lorenzo Alexander, who re-signed for the 2019 season this week, when he was asked during locker cleanout day about the possibility of beating the mighty Patriots.

“Why not? I've played them enough to understand that the mystique that they have, I don't buy into it,” Alexander said. “It's all about getting guys to not buy into that. That doesn't mean that they're not a good team, but we've competed with them. They've just been more sound for longer in the games that we've played against them and figured out a way to make the plays that we haven't.

“If you have enough guys believing that we can go up there and beat them or they come in our house, we can beat them regardless if they have Tom Brady or whoever on their roster. They've lost games. So they can be beaten and we have the talent here – and hopefully we bring in additional pieces that's going to help us do that next season.”

Alexander sees the Bills on an upward swing, which is a big part of the reason he was interested in returning.

“Obviously we're not where we want to be as far as being in the playoffs and playing for a championship, so that's disappointing and sad in a sense because I think we had three or so games that probably would have changed the trajectory of our season,” he said. “Josh (Allen) staying healthy, too, would have helped immensely in that process. But things are looking bright and looking up for the future. I think we have a great young core here from Josh to Tremaine Edmunds to Levi Wallace to Matt Milano, Robert Foster, Zay Jones. There's a lot of young talent here. We're primed to do something special, I think.”