A winter storm watch is posted for all of Western New York from 1 p.m. Saturday until 6 p.m. Monday.

Forecasters' first projections as to how much snow will fall started rolling in this morning.

Most of Western New York should expect at least a foot of snow, forecast maps showed.

The storm is expected to sweep along a weekend path from roughly Oklahoma to Kentucky, through Virginia and then toward New England. Along the way, it's forecast to phase with a trough to its north, which will strengthen the storm, the weather service said. 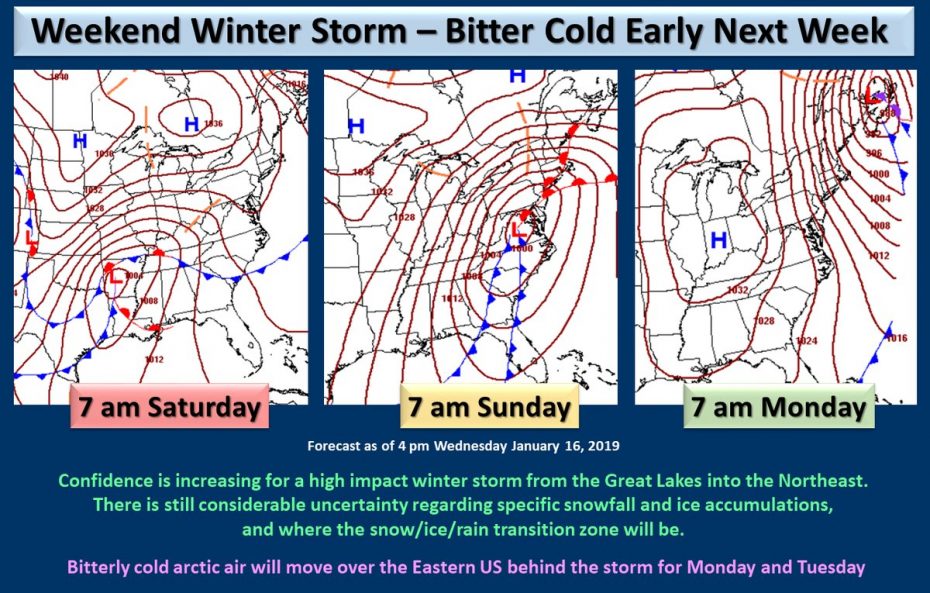 "Model guidance is in good agreement, considering the time frame, but there remains uncertainty in the track of the low," the weather service said.

If the storm takes a slightly more northerly track, snowfall could be heavier and totals could be deeper by Sunday. A more southerly path would push the heaviest snowfall south of the Buffalo Niagara region.

Areas on the cold side of the storm — like the Buffalo Niagara region — will see snow. Those on its warm side will get rain.

"There is no doubt this will be all snow in our area, with increasing confidence that accumulations will be significant," the weather service said.

With a continuous deepening of the storm system and increased atmospheric lift across much of the Buffalo Niagara region, forecasters expect snowfall to ramp up late Saturday. It could be windy, with gusts as high as 40 mph, and some lake-enhancement could enter the picture, adding to snowfall totals.

"Snow rates will likely be in the the 1 inch per hour range with the potential for higher rates where enhancement is likely," the weather service said. "Snowfall accumulations of 8 to 16 inches are possible overnight (into early Sunday)."

As the storm moves farther away from the Buffalo Niagara region into New England, lake-effect snow is expected to develop as cold air rushes into the area behind the passing storm. The lake-effect snow is forecast to continue through Monday, forecasters said. 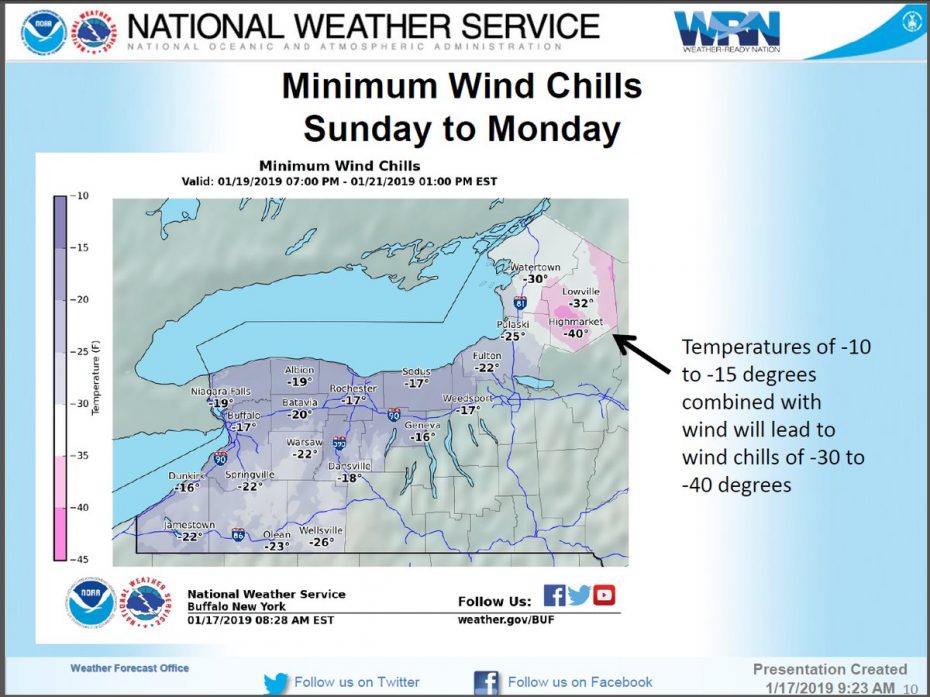 What's more, the Arctic air building behind the storm system will drop temperatures into the lower teens on Sunday, below zero overnight Sunday and then only rebound to about 8 degrees on Monday, weather service forecasts show. Wind chills are forecast to be well below zero.

Between now and then, the weather service said to expect increasing clouds today with temperatures near 30 degrees.

Some light snow is expected overnight tonight as a weak storm system traverses the region. New snowfall of 1 to 3 inches is possible.

Chances for snow showers are expected to continue Friday with highs in the low 30s. Overnight lows Friday are expected to dip into the upper teens with scattered flurries possible, the weather service said.

A look even further ahead, like to next weekend, could be even colder in North America, according to a European forecast model.

Thank a displaced polar vortex for that, experts said.

Last night's ECMWF forecast could be the poster child for the #PolarVortex truly museum quality graphics! Brutally #cold for the Eastern US with only Woolly Mammoths and Saber Tooth Tigers missing. pic.twitter.com/TvVtkZMAyl