Harry King, 55, first told a Buffalo Diocese administrator in 2002 that the Rev. Donald Becker sexually abused him when King was a teenager in the late 1970s. He spoke to The Buffalo News this past spring, on the condition that his name be kept out of the story.

Now, King is telling the world, with his name attached.

King posted on Facebook this week a raw and powerful 3,800-word essay about the alleged abuse and its effect on his life. In the essay, King reveals his battles with depression and his multiple attempts to kill himself. He discusses what it was like to meet with two retired judges who are determining how much clergy sex abuse victims receive under a diocesan program to compensate victims.

In March, Becker told The News he had not molested any children, although Buffalo Diocese officials said Becker had been removed from ministry in 2003 because of abuse allegations. Days later the diocese said the allegations against Becker were credible.

Please be warned: King’s story is disturbing and includes graphic accounts of the rape of a teenager. We publish King’s story because it gives a rare look at how sexual abuse — and the church’s response — wounded one person, as a teen and for decades.

Here are excerpts of King’s story, in his own words:

I was raped by my parish priest at St. Peter and Paul Church in Hamburg when I was 13. The first time I ever told anyone was a few weeks before I married my (now ex) wife. I didn’t elaborate then, and in fact I didn’t even tell my parents until a few years later. When I did, I lied to my parents about the seriousness (of) the abuse and told them a very vanilla story.

When my sons were born, we lived in the city of Buffalo. My wife and I chose to send them to a Catholic school. Once again, my mind sorta flipped out. This happened in 2002 when there was a huge scandal in Boston about pedophile priests. The increased public acknowledgement of the issue led me to contact an attorney. Although there was nothing I could do legally, due to NYS’s legal system, the attorney contacted the Diocese of Buffalo. Turns out that Father Donald Becker had been credibly accused by 3 other people prior to my complaint. The diocese attorney admitted to us that they were well aware that the guy was a pedophile.

The bishop at the time didn’t actually have the common courtesy to meet with me. Instead he had his associate bishop, Monsignor Robert Cunningham meet us. The monsignor told me that the church was aware of Father Becker’s past history, and he assured me that Becker was very, very ill and in a nursing home in Batavia. The monsignor said that the priest didn’t have any contact with the public. He said all the right things, seemed very sincere and I came away from the meeting feeling much more at peace with my past.

Fast forward to last year. Suddenly it broke in the paper that the church was well aware of several priests that had been accused and did nothing about it, except shuffle them around to different parishes. Not only that, it turns out that past and present bishops and church leadership actively tried to cover up the abusive priests. It seemed that every time I opened up the paper, there was another story.

I contacted Jay Tokasz from The Buffalo News who had been covering the issue. He was able to contact Father Becker who, it turns out is not very, very ill in Batavia, but attached to a parish in Fort Meyers, Florida, which really upset me because I felt lied (to) again. The paper published the pedophile’s picture and quoted him saying he knew nothing of the allegations. 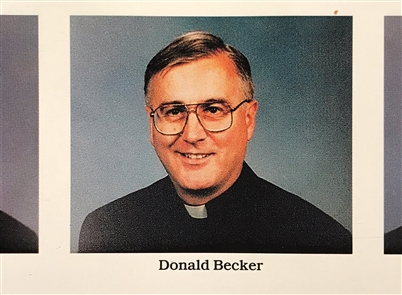 Needless to say, I was quickly becoming quite disillusioned by the church. The peace I was feeling about my past was quickly evaporating, only to be replaced by anger at the institution instead of the pedophile where it belonged. At some point, the church decided they were going to ‘voluntarily’ compensate the victims. I filed paperwork to be included in the compensation.

Some of you know that I have struggled with mental health issues in the past. Medication and counseling have only gone so far, and I have attempted suicide three times. Once when I was young and twice when my marriage was failing.... I had many dark days and sometimes my meds did nothing for me. I spent days in bed, not moving. Sometimes I had flashbacks, sometimes I would cry for hours and didn’t know why.

In late October, I was notified by the church that the two retired judges that were overseeing the compensation program wanted to meet with me. So I met with retired judges Barbara Howe and Jerome Gorski.

I told them that for two years while I was an altar boy, Father Becker had been flirting with me. Always touching me, ‘playfully’ grabbing at my crotch over my pants or cassock. I told the judges how one afternoon, I went over to the church and Father Becker came running out of the rectory. He pulled down my shorts right in the middle of the parking lot. I told them that he started grabbing at me. I was mortified.

I told the judges how a few days later Father Becker called my parents and offered me a summer job painting the school classrooms. I took the job, thrilled to be paid so much money at age 13. I told them how one day, I was painting a hallway right next to the girls’ restroom. I had to go. Since I was the only person in the building I went into the girls’ room, instead of walking to the other end of the hall. Father Becker walked in. That was the first sexual experience of my life. I felt so filthy.

One day a few weeks into my job, Father Becker told my boss that he needed me to help him do some work at his ‘cabin in the woods.’ When we got to the cabin, Father Becker gave me a drink he called a ‘Hot Toddy.’ It didn’t take me long to realize it was alcohol, and I was getting drunk, real drunk. Somehow he convinced me that ‘real’ men work in the woods completely naked. He took off his clothes and somehow I ended up naked too. One of the few memories I have after getting naked, was him forcing me to my knees in the dirt.

Every week, he took me to his cabin to be naked and rake leaves or do something outside. Then after the work was done, he’d have plied me with enough booze that he could do whatever he wanted. At some point, he started raping me. I told the judges how he told me that I shouldn’t tell anyone. I told them about when he said that my father (who worked for Our Lady of Victory, a Catholic hospital) might lose his job if his boss Monsignor Wurtz found out.

Then late that summer, I attempted suicide. I had had an argument with my mother about something and I snapped. I told the judges that my next memory was that of Mrs. Green, my mom’s best friend sitting on my bed crying and stroking my face. She asked me what had happened and I started crying. All I could say was ‘Father Becker.’ I guess Mrs. Green and my mom thought that I wanted to talk to him, so they called the pedophile. I told the judges how betrayed I felt when my mother agreed to send me to his cabin to talk things over with him for the night.

I told the judges how much I didn’t remember about that night. I just remember the pain. I told them that on the way home, we stopped at a hotdog stand for food. I remember going into the restroom and seeing all that blood in my underwear.

I told the judges how the summer went on and on and then in the late fall things started tapering off because it was getting too cold to go to the cabin. Mercifully it ended. I suppose in retrospect, he moved on to fresher meat. I told the judges that I knew of two others who had been victims. Sadly I wasn’t his first, and I wasn’t his last.

When I finished telling my story, the judges asked if I’d like some time to compose myself. I just wanted to get out of the room.

About a month later they sent my attorney a letter. The letter contained a 10-word sentence: “We hereby determine an award of $140,000, as our decision.”

It was less than a third of what I expected. I’ve wondered what happened to those who received more than me… how horrific it must have been compared to what I went through. I wonder how the judges came to my award amount. If you add up the years, it works out to be about $3,500 for each of the past 40 years. I usually spend more than that on counseling and medication during the year.

I felt raped and humiliated all over again and it wasn’t because of the money. The letter only had 10 words on it. Not an apology, not a ‘we are praying for your healing,’ not even a ‘good luck.’ It finally sunk in that the Church didn’t really care about the victims. It finally sank in that the judges weren’t there to make me feel whole, they are on the payroll of the Church. They are just as complicit in the abuse and cover up as everyone else because they never really held their employer responsible.

I should be angry with the monster that thought it was okay to have sex with a 13-year-old. Instead, I was angry at the church. The bishops, the pastors, and now the judges. I became more angry that no one has ever been looking out for me, not when I was 13, and not now all these decades later.

I tell this story today because today I say NO MORE! Because I wasn’t willing (and in some ways scared) to tell this story out loud, they controlled me. So today, I am no longer a VICTIM. Today I am a VICTOR! Today, the Church and the pedophile are not worthy enough to occupy a place in my mind. While I am sure I will always suffer the effects of that summer, It no longer will define me.