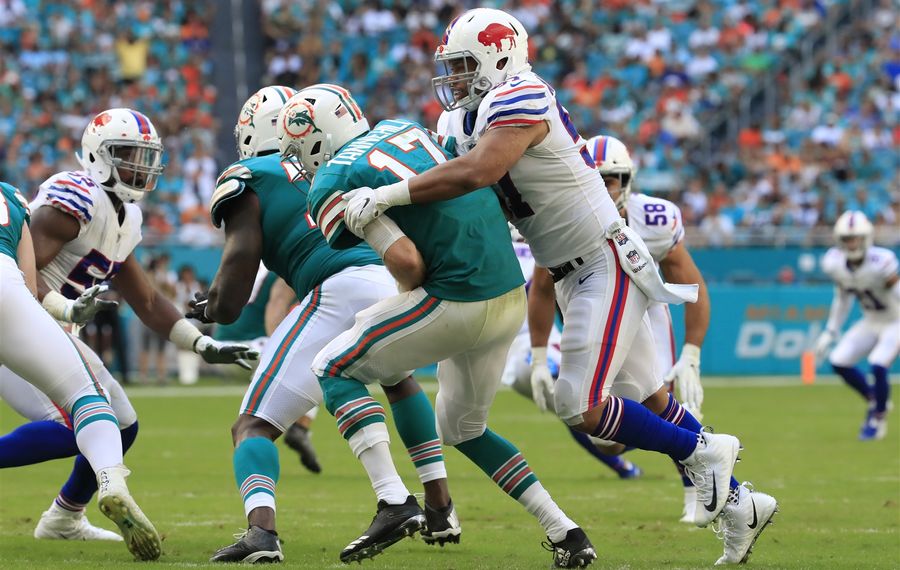 The Bills made of one their easiest personnel decisions of the offseason Wednesday, re-signing veteran linebacker Lorenzo Alexander to a one-year contract extension.

Alexander, who turns 36 in May, ranked eighth on the team in both defensive snaps played (62 percent) and special teams snaps played (39 percent) while earning the second-highest Pro Football Focus grade of any Bill at 85.7 (Jerry Hughes was first at 88.7).

“If you ask me today, yeah, this is my last year,” Alexander said. “At some point you've got to eventually walk away from the game and start the second half of your life. Obviously, I've got a lot of life to live and there are other things I want to do. I have four kids that I want to be a part of what they're doing, whether that's Little League sports, dance, soccer, whatever that may look like.”

Alexander hasn't been in Buffalo as long as Kyle Williams was, but his send-off will feel similar. Alexander has been a vocal, veteran leader and all-around good-guy since arriving in Buffalo and actually has the sixth-most games played for the Bills of anyone on the team (Hughes, Jordan Mills, LeSean McCoy, Charles Clay and Ryan Groy are ahead of him). Alexander would like to go into broadcasting after retirement, so maybe he'll stick around in Buffalo after his playing career is over.

One start confirmed QB Matt Barkley's belief: He belongs in the NFL: Matt Barkley has a job. He'll be the Bills' backup QB, but being one play away is a heck of a lot better than being out of work. “I’ve been cut. I've been injured. I've been third string, starter and a backup in the league – you name it in this league and I’ve done it,” Barkley said. “So when you're sitting on your couch and guys are playing, you're like 'is this really for me? I thought I was that good, but I'm here.’ I had to keep reminding myself that I could play.”

Bills sign OL Jeremiah Sirles to one-year contract extension: Sirles is a versatile lineman who adds depth at the position. He may not be in line for a starting job yet, but quality backups go a long way in the NFL.

Shockwaves around the PSE empire: Two veteran executives who recently left Pegula Sports and Entertainment were the subjects of an internal investigation into whether the two men sexually harassed female employees after a holiday party in December, The News exclusively reported.