Three out of every 100 people in the United States consider themselves vegan, polls suggest. No meat, seafood, dairy products or honey crosses their lips.

Considering Buffalo’s well-earned reputation as a meat-and-potatoes town, it’s hardly shocking that it took until May 2018 for a plant-only restaurant to open here.

Most restaurants, functioning on profit margins not much larger than three percent, have made sure something on their menu is devoid of animal involvement. Places like Merge, Amy’s Place, Pizza Plant, Grindhaus Café and Betty’s have gone further, earning a following with vegan craftiness, but few operations have wanted to bet their future on writing off carnivores.

Since May, Sarah Sendlbeck and James Ernst have been making history at Root & Bloom Cafe, where diners weary of defaulting to salad and fries, or grilling servers about sauce ingredients, can simply enjoy their meal. It's tiny, but Buffalo’s vegans finally have a room of their own.

The winter menu includes a dozen dishes, savory and sweet. Many aim to echo the satisfaction of meaty classics with guilt-free plant-based ingredients. Chicken wings, chorizo pork sausage, corned beef and bacon are among meats caricatured in vegetable form. (The second vegan place in town, VilaVerde Cafe, has taken a similar tack.)

Some critics argue that tactic perpetuates unhealthy eating patterns. But if you have the nerve to open a vegan restaurant in Buffalo, I’m not going to criticize you for pushing soy-based methadone for bacon junkies.

Some of the results startled this omnivore. Vegan wings ($13), in Buffalo & bleu or BBQ & ranch, are evocative of deep-fried chicken flesh. Call them chicken nuggets, and the texture of dehydrated jackfruit inside the craggy-crusted chunks could fool many.

The quarter-inch crust is too thick, but the breading ably soaks up the Frank’s sauce. The sticky barbecue sauce tasted like artificial smoke, but then again in Buffalo that’s standard. 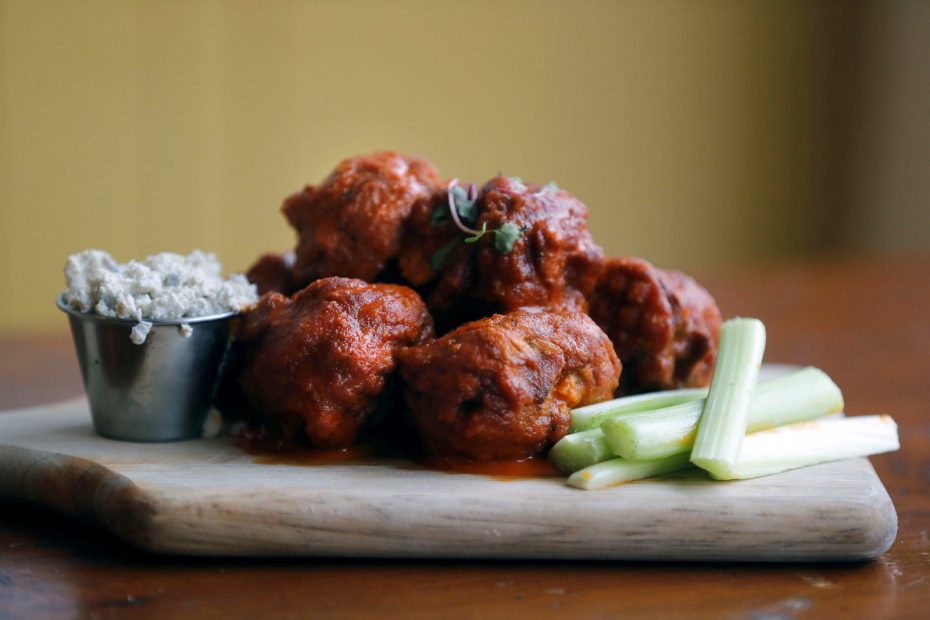 The dipping sauces are further off, the ranch landing closer to its namesake than the blue cheese, which evoked fermented hummus. Nonetheless, Root & Bloom’s vegan nuggets are a substantial achievement.

The mac and cheese ($14, image at top of story) is based on cultured cashew cream, whose tang reminded me of aged cheddar, with nutritional yeast to help with the umami. Dank sautéed mushrooms did, too, while bread crumbs added a dash of texture. 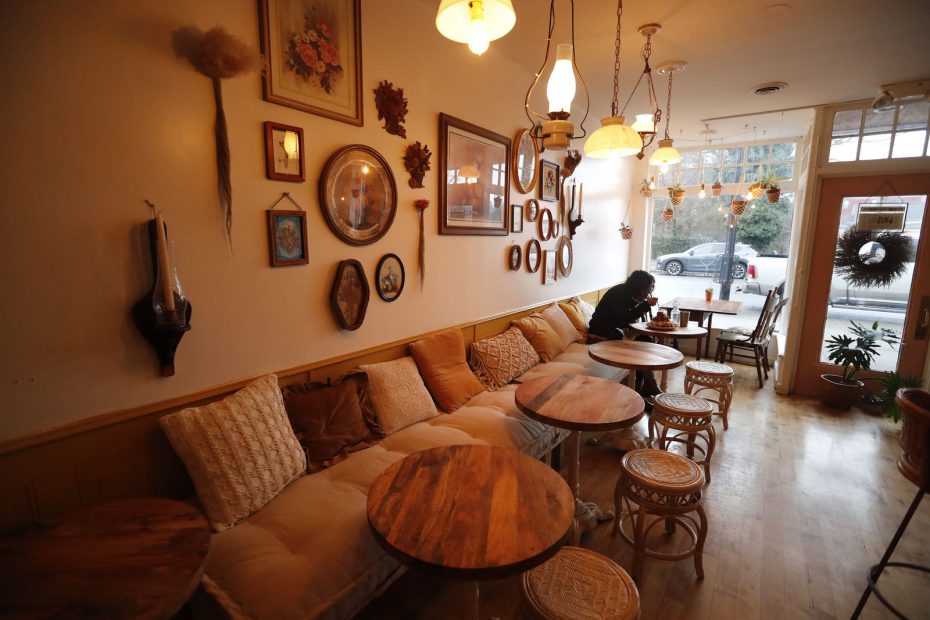 That cashew cream was the foundation of an eggless nog ($8), a tall glass rimmed with cinnamon sugar and a toque of whipped topping. Sweet and thick, laced with nutmeg, only the sourness and faint graininess gave it away. That cashew cream could easily replace yogurt in a mango lassi.

Another winner is the quinoa chorizo. It stars in loaded Mexican breakfast toastadas ($15), alongside ranch “eggs,” habanero crema, crispy corn tostadas and black beans. Or atop a jalapeno cornbread waffle ($15), with more black beans, habanero crema, cilantro and lime.

The radical eggless omelet ($13) was too revolutionary for me, leaving behind the impression of grainy bean flour. The tomatoes, potatoes, and spinach inside called for more seasoning, too. 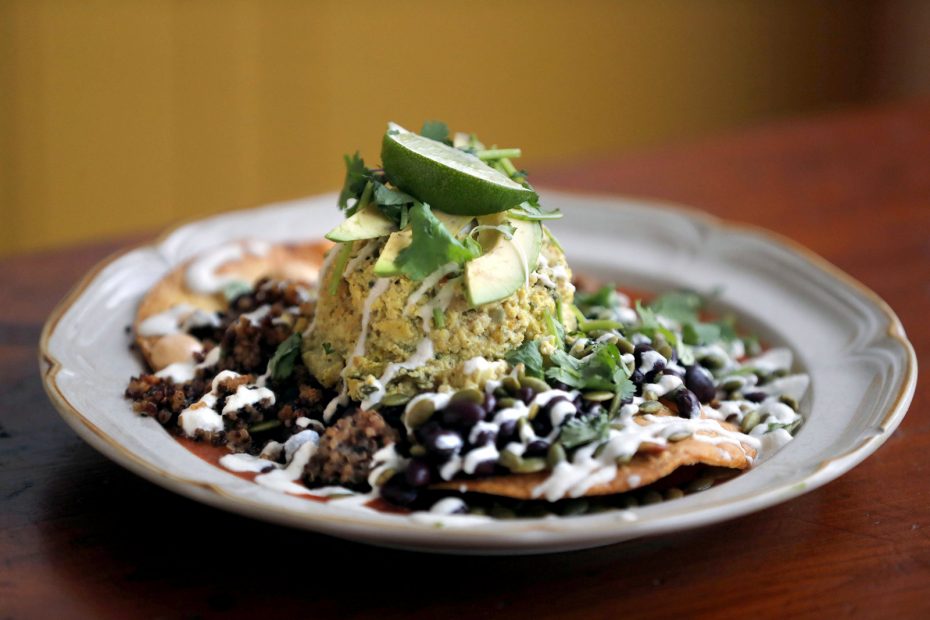 If you order a charcuterie platter ($18) at a vegan restaurant, can you really complain it was disappointing? I will anyway. The highlight was my introduction to Miyoko’s vegan cheese, especially the terrific smoked farmhouse and double cream chive. Olive and sun-dried tomato tapenade and mushroom pate, both underseasoned, paled in comparison.

A chocolate chip cookie skillet ($9) takes 20 minutes, and they might warn you on the menu. It turned out to be a cake, which is nice but not a cookie. The vegan ice cream from Perry’s made a fine reparation. 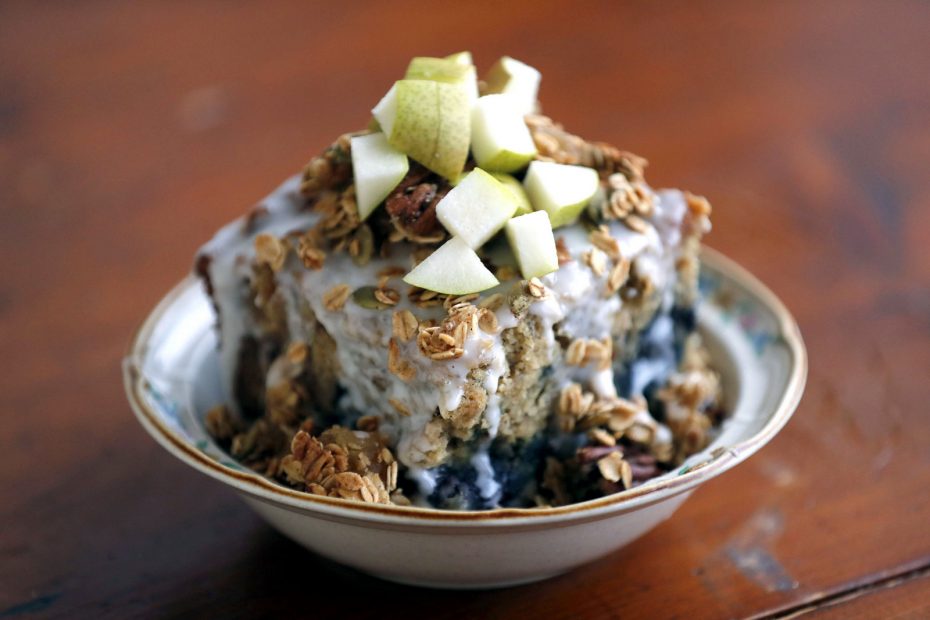 If you’re vegan, vegetarian, or vegan-curious, you must visit. Just remember: no matter how cool it may look on Instagram, Root & Bloom is a fledgling restaurant opened on a shoestring. So if you want to be happy here, you need to let go of more than your love of meat. No reservations for dinner. Bring cash for the tip, as you can’t leave one on a card. Hope you don’t draw the notably tippy two-top.

Unwieldy cushions on homemade benches, plus the street-view four-tops requiring yogi-like flexibility to exit, made me feel old and cranky. So did the relatively hustle-free atmosphere. If I was vegan, I would be so giddy about this place, I might not even have noticed.

The food is solid-to-interesting and shows promise across the menu, four months in. If it was a baby it would just have started holding its head up. It can get better benches later. Root & Bloom already has more important features: a mission and an audience. 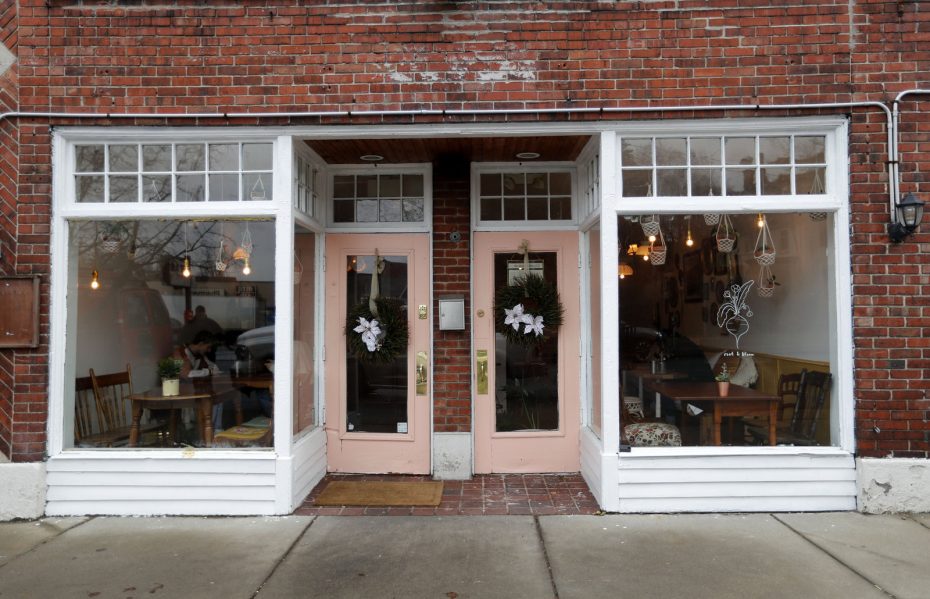 Root & Bloom started on the veranda out back, but moved inside for fall. (Mark Mulville/Buffalo News)