It’s always tempting this time of year to speculate about what the Rev. Martin Luther King Jr. would say about some divisive contemporary issue.

That guessing game evokes debate as each side cherry-picks his legacy to assert that he would voice support for their side of the argument.

But I think it’s safe to say that there is one thing he would not say: I want a statue in Buffalo that looks just like me.

In fact, the whole debate over the representational bust in Martin Luther King Jr. Park strikes me as a huge diversion of energy that could better be spent solving real problems – not to mention being a little bit insulting because it implies that King’s supporters here can’t appreciate an abstract design.

No one should have been surprised that the 8-foot-tall bronze bust atop the sloping, curved stone wall did not look exactly like the slain civil rights leader.

Former Common Council Member Clifford Bell led the committee that selected African-American sculptor John Wilson of Boston, Mass., from among 16 applicants and three finalists. He said Wilson was the unanimous choice precisely because of his larger vision of what King – whom Bell called a humble man not concerned about his image amid all that was going on – represented.

In fact, a full year before the bust’s 1983 unveiling, Wilson told The Buffalo News, "I wanted to make something that would have a larger symbolism and not just another literal portrait of some important man."

Still, The News reported, some in the crowd at the unveiling "expressed disappointment" that the bust was not a good likeness of King. 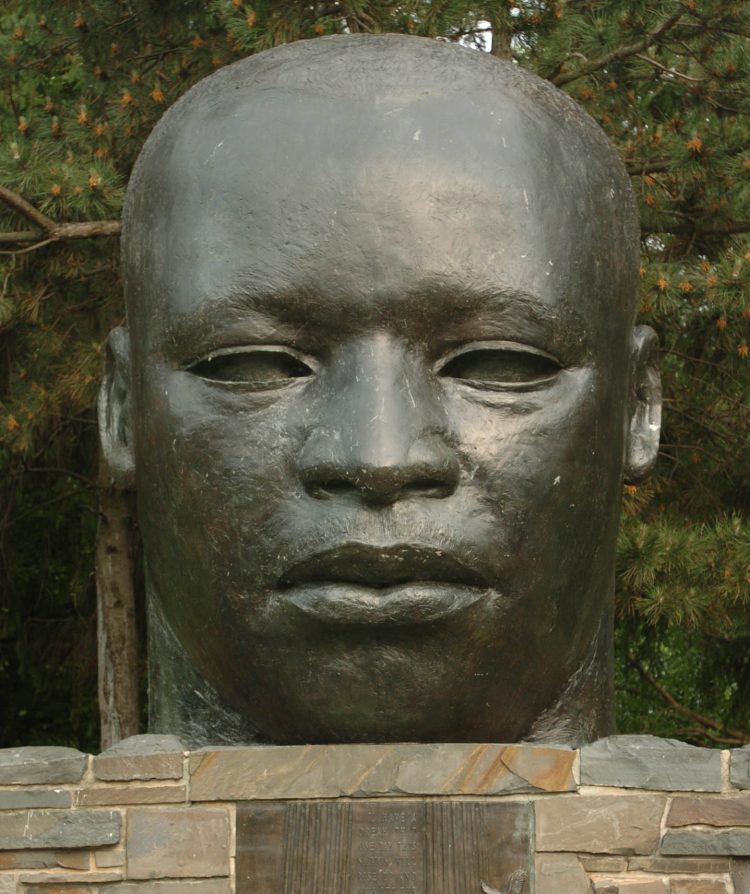 The bust of the Rev. Martin Luther King Jr. in Buffalo was created by John Wilson of Boston. (Mark Mulville/Buffalo News file photo)

More than three decades later, that disappointment manifests itself in Samuel A. Herbert’s petition drive to melt down the bust and replace it with an exact replica because King is "deserving of a statue that looks just like him." Herbert has collected 8,227 signatures toward a goal of 10,000 since kicking off the drive on last year’s MLK holiday. He hopes to get the remainder during a final push from 10 a.m. to 5 p.m. Saturday at the Broadway Market, two days before this year’s national holiday.

After the petitions are given to city, county and state officials, Herbert envisions a professional fundraiser leading an effort to finance a new statue, with savings coming from melting down and reusing material from the existing $300,000 creation.

It should never come to that.

If anyone has earned the right to have a say about the bust in the MLK park, it is Herbert, who has consistently been out front in forcing the city take care of the park. For example, his is typically the first voice speaking out when the $4.5 million four-seasons water feature malfunctions – as it has far too often since its 2013 debut.

Still, the idea of destroying art we don’t like smacks of something the Taliban might do. That’s particularly true when the bust was never intended to merely mimic. Rather, it was created by someone whose work often, as the Boston Globe noted in Wilson’s obituary, dealt with "the intersection of art and politics."

The celebrated draftsman and sculptor, who died in 2015, has a smaller bust of King displayed in the Capitol Rotunda in Washington, D.C., and a 7-foot "eternal presence" bronze head reminiscent of his Buffalo creation outside the Museum of the National Center of African-American Artists in Boston.

Ten months before the debut of Buffalo’s bust, Wilson returned here and again talked about the sense that King "had a kind of life that was universal." In capturing the universality of the struggle, Wilson said up front he was opting not for a "precise photographic likeness" but "something much more metaphoric, more symbolic of what he stood for." He wanted "an enigmatic image ... that a very wide audience can respond to."

The quiet strength and dignity of what stands today in Martin Luther King Jr. Park is proof that he succeeded.

Destroying that on the simplistic notion that a bust always must be an exact likeness would be a travesty that would subject Buffalo to well-deserved ridicule as a cultural backwater.

Bell – who offered to help Herbert raise money for a second statue – said the history of the current bust will be explained as part of a Black History Month exhibit at the Central Library. Maybe it also should be explained on a plaque that could be installed at the site, so that visitors unfamiliar with the context of Wilson’s creation have a better understanding of what they are looking at.

The irony, of course, is that King – who tried to unify – is now the subject of division in a community that has far bigger issues to deal with than whether his Buffalo statue looks just like him.