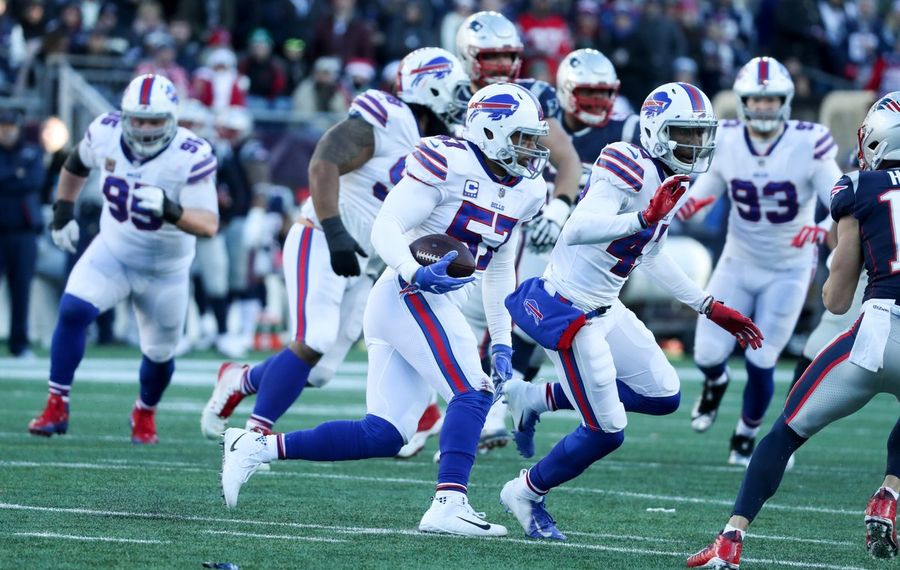 The day after the 2018 season ended, the Buffalo Bills’ veteran linebacker said he didn’t feel the need to test the free-agent waters in March. If he was offered a contract he felt was fair to both sides, he knew he wanted to stay in Buffalo.

“The team wanted me back. They feel like I’m an important piece as far as helping this team in a leadership role, and obviously what I do on the field,” Alexander said on a conference call with Western New York media. “And then for me, being at the end stage of my career, having a family that has been acclimated to this culture and accept it, after bouncing around for a couple years from Arizona to Oakland and then here, it just made sense for us to get something done early. Knowing where we’re going to be at, knowing what our kids’ school is going to look like, all that stuff that kind of gets overlooked oftentimes in these negotiations.”

Alexander turns 36 in May. Although he left the door cracked a little, he made it sound Thursday like the 2019 season will be his last.

“If you ask me today, yeah, this is my last year,” he said. “At some point you've got to eventually walk away from the game and start the second half of your life. Obviously, I've got a lot of life to live and there are other things I want to do. I have four kids that I want to be a part of what they're doing, whether that's Little League sports, dance, soccer, whatever that may look like.”

Alexander’s eagerness to return was matched by the Bills – for good reason. He may have been the team’s defensive MVP last season, playing in all 16 games (with eight starts) and finishing with 69 tackles (11 of which went for losses), 6.5 sacks, two interceptions, nine passes defensed and two forced fumbles.

“We like Lorenzo and appreciate all that he’s done for this organization. I’m about keeping those types of guys around,” Bills General Manager Brandon Beane said at the team’s end-of-season press conference. “I think we all in here can agree – he can still play.”

If that’s the biggest reason the Bills were interested in bringing Alexander back, a close second is his leadership. Voted a team captain by his peers, he’s been the Bills’ selection for the Walter Payton Man of the Year award in each of the past two seasons.

“I've learned over time that you always have to have a sense of urgency and you have to have an appreciation for an opportunity to go out there to put yourself in a position to win a championship,” he said. “I'm going to start putting in the work now as far as getting my body right, helping other guys understand that as well during the offseason program.”

The Bills finished second overall in total yards allowed on defense and will be playing in the same scheme for the third straight season. That gives Alexander high hopes for what’s to come.

“We have a great opportunity,” he said. “We have a young football team. Obviously, we're going to add some pieces. The way we finished the year, the way our offense started to come along -- and if we can continue to play defense the way we did this past season, as well -- there's no reason why we can't find ourselves at least in the playoffs, and once you're there, you have a chance. … I don't think we're that far off. ... I think we're closer than what people think and obviously this draft and free agency is going to play a significant role in us making that next push.”

In three years with the Bills, Alexander has started 35 games, making 223 tackles, 22 sacks, 16 passes defensed, eight forced fumbles and three interceptions. He was selected to the Pro Bowl in 2016 after racking up 12.5 sacks – an out-of-nowhere season for a player who to that point had predominantly contributed on special teams.

Although his sack total wasn’t as great in 2018 as it was in his first season in Buffalo, Alexander believed he was more productive as a pass rusher last year. He played 61 percent of the defensive snaps in 2018 – a number he said helps keep him fresh.

“Last year we were able to sit down and go over where is my sweet spot,” he said on locker-cleanout day. “Obviously when I’m on the field, I want to be impactful, but I know there’s al ine as far as how many plays. I think for me the sweet spot of being most effective is probably between 60 and 70 percent of the snaps in a game, so that when I do get my opportunity to rush, I’m still fresh.”