These are my words from a Monday Buffalo News article. “We’ll begin with snow potential. I use the word potential because of unavoidable uncertainty in storm track and intensity forecasts this far out in time (Monday). Here is National Weather Service HQ’s Sunday morning forecast map. Their projected position for the surface storm system would be favorable for at least moderate snow to reach Western New York, if not heavy. The packing of the 'isobars' suggests a very brisk NE wind, which would cause blowing and drifting.”

Here it is midweek, and the words still hold true. With each computer model run, they spit out very precise-looking snow totals to which the public has access. I posted one on my Facebook page yesterday with a big, fat disclaimer that it was just one run of one model, and that “NO!!” I wasn’t buying those numbers. Some quasi-panic still erupted on my thread, so I won’t run that failed experiment again. There is good social research demonstrating a large proportion of the public see a range, and glom onto the highest number. It seems to be human nature.

The fact that models spit out these numbers infers there can already be precise accumulation forecasts far in advance of a storm that still has considerable uncertainty in its track forecast. That’s why most responsible professionals would not seriously offer real accumulation numbers yesterday or even today (Wednesday).

What I can tell you is overnight model runs have pretty good agreement the track of the center of this low pressure system has shifted south, close to 50-75 miles south of previous model runs. IF that trend continues in future model runs, and there are many to come (some models run every six hours, others every 12, and high-resolution models closer to the event run every three hours), snowfall totals would be somewhat less than in Monday overnight and Tuesday model runs. They would definitely be less than the absolutely wacky totals from the Monday overnight European model that I posted in my failed social experiment, dripping with disclaimers. That model run, for example, showed 29 inches (!) for Buffalo and higher amounts to the south.

Numbers like that are not to be found in newer model runs, including the European ones.

In the newest morning run on Wednesday, the American GFS has stopped that southward shift and may actually be back a few miles farther north. This is how the model depicts this storm at 1 a.m. Sunday: 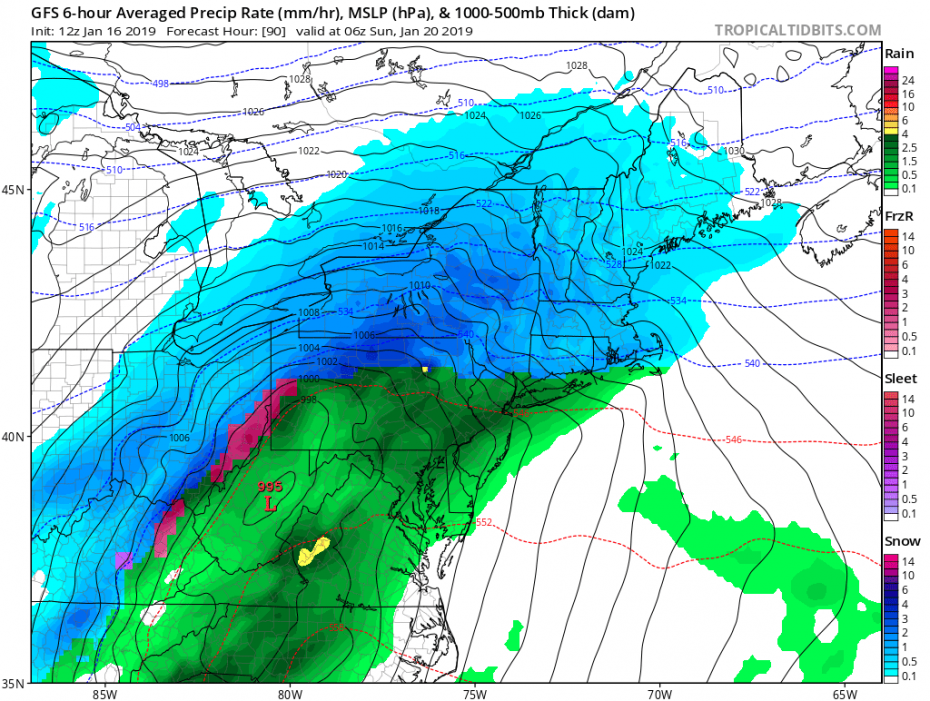 The darker blue shading indicates the GFS keeps the absolute heaviest snow south and southeast of most of Western New York, but snow totals in this run do not let us off the hook for moderate to heavy snow (keep in mind, again, the "precise" numbers imply a certainty that is, in reality, not there): 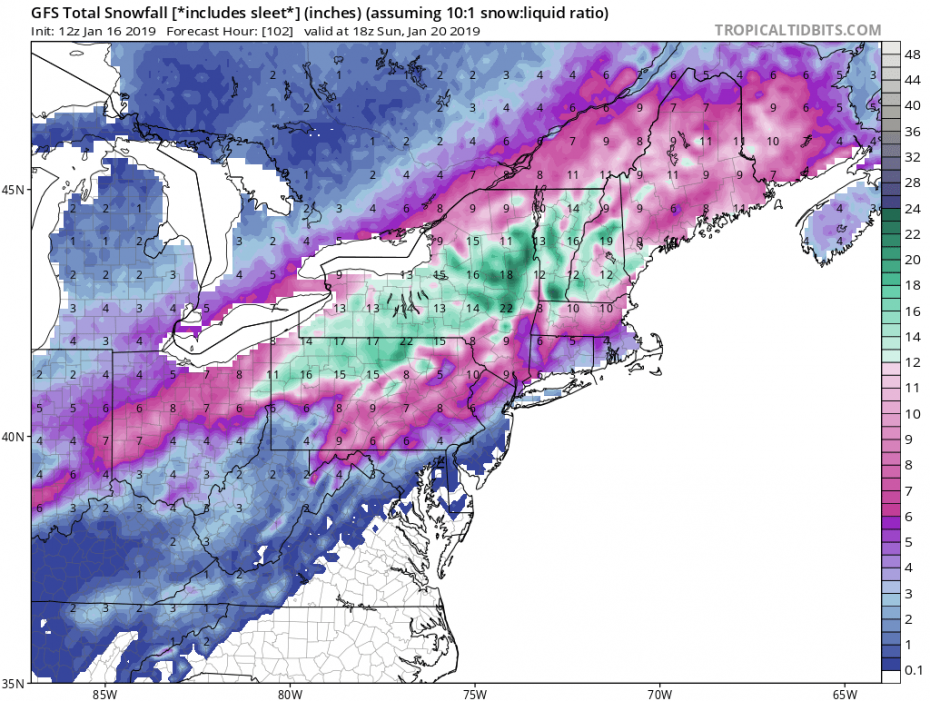 The newer experimental GFS is again more heavy-handed than the GFS. This is how it depicts the storm at 7 a.m. Sunday: 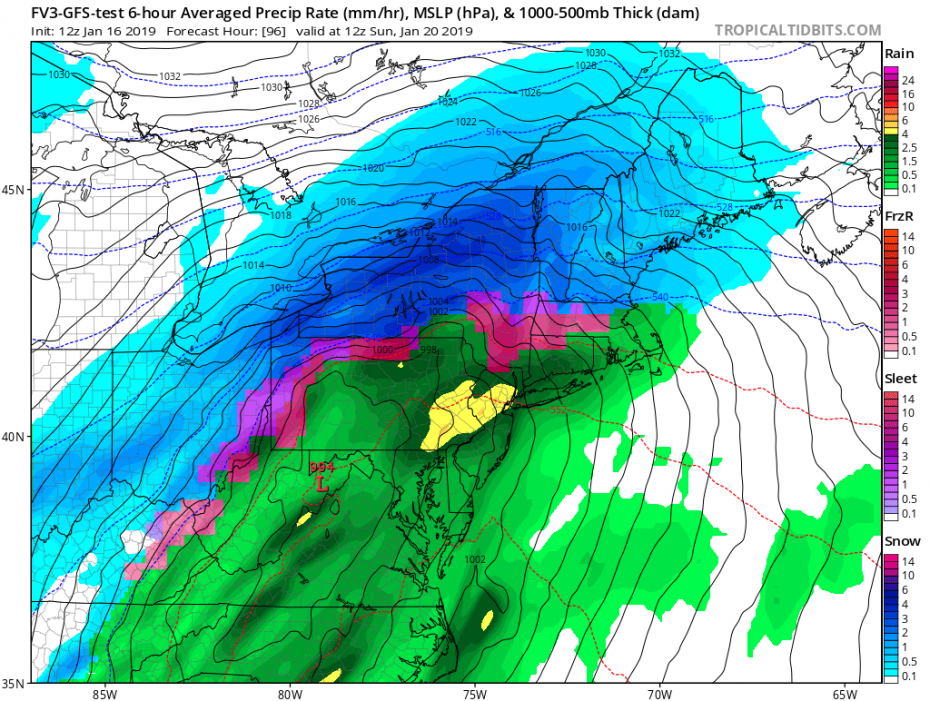 And here are its projected snowfall totals: 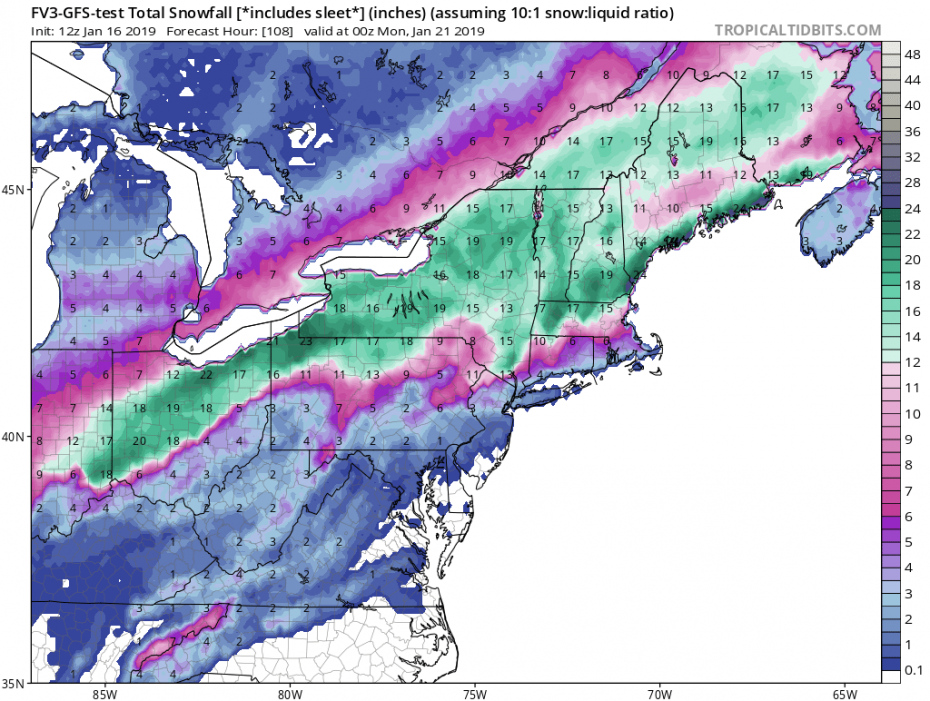 Because it is so much heavier than the other models, my experience tells me it is less likely to verify. But it is not so far off the mark that it can just be tossed out.

The Canadian GEM takes the storm on a somewhat more southerly track. The GEM’s snow total range goes from moderate to marginally heavy near Lake Ontario to heavy but not overwhelming closer to Pennsylvania.

The European ECMWF takes the most southerly route, bringing its snow totals down from those wacky Monday overnight numbers. Numbers range from moderate to the north of Buffalo to heavy but manageable in the Southern Tier. So, the ECMWF has gone from the snowiest-by-far model 24 hours ago to the least snowy of the main models as of this morning.

This is why it is important to communicate uncertainty where it exists (even more so in medicine than in meteorology). People understandably want precision, but this uncertainty is why people like my colleagues in the National Weather Service and me are not going to pump out a narrow range of numbers on a Wednesday ahead of a weekend storm. As I joked on Monday, that would be bad science, done on purpose. I prefer accidents.

This much I can tell you with greater confidence. This storm is not going to disappear and completely miss us. It will bring moderate to heavy accumulations, unless there is a radical shift of the storm to the south.

It will usher in the coldest temperatures and wind chills of the winter, so far. Readings will likely fall into single digits by Sunday afternoon, and slip below zero by Monday morning. Sunday wind chill values will drop to minus-5 to minus-10, colder near Lake Ontario. There will be enough wind to cause considerable blowing snow for poor visibility and drifting.

As of now, though, it looks like it won’t generally be quite windy enough to reach blizzard criteria. The latter requires sustained winds or frequent gusts of 35 mph for three consecutive hours, with visibility frequently down to or under ¼-mile. The greatest chance for heaviest totals as of now will be south of the metro area in this widespread storm.

In the wake of the storm, the low level wind direction will not be favorable for bringing lots of lake snow to the metro area, being generally from the northwest.

As for the arctic blast, this coming one is not going to be quite that persistent. For example, the GFS show a brief bubble of seasonable temperatures by early Wednesday: 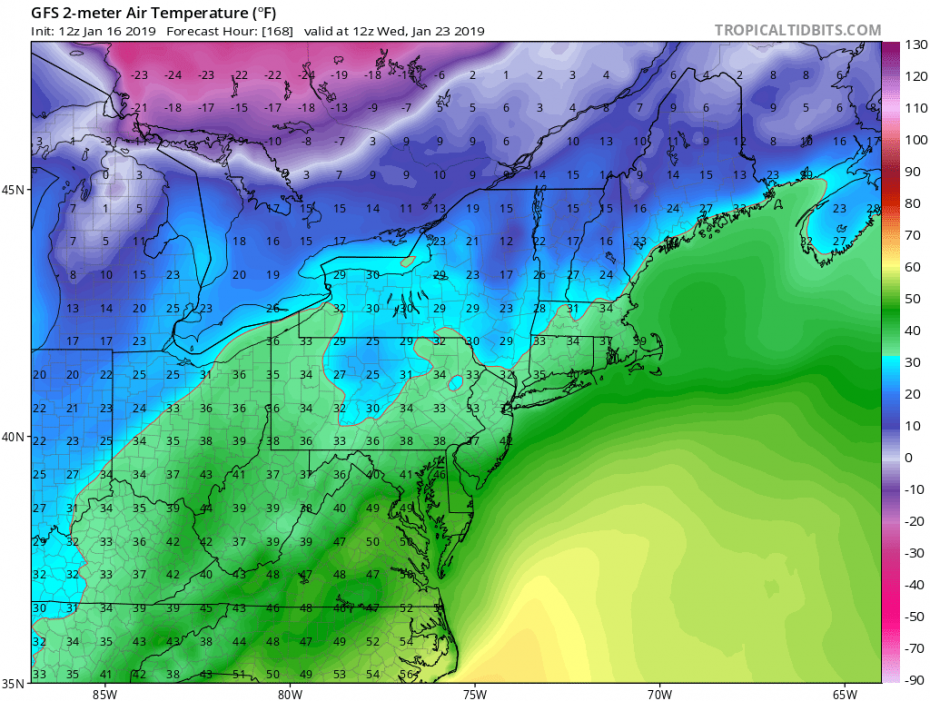 As I wrote on Monday, storm systems traversing the nation tend to bring up brief surges of milder air ahead of their arctic cold fronts. There probably will be a few brief marginal warm-ups within this wintry pattern. But by late in the month into February, there is good extended range ensemble agreement the thermal hammer is coming down: 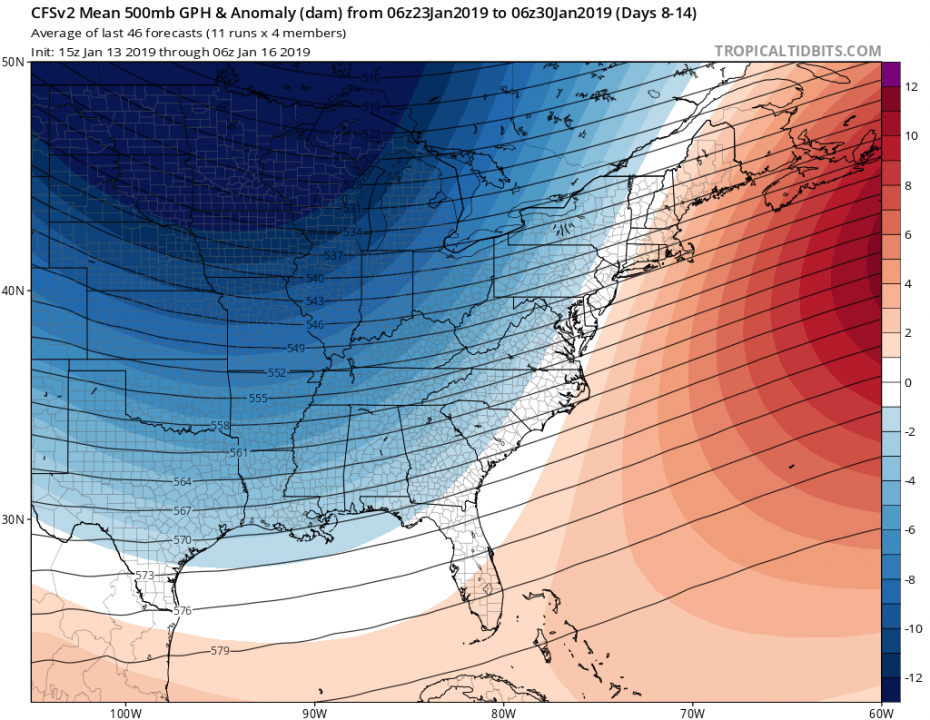