Kyle Lofton watched a livestream of the ceremony from his dorm room in late May, a week after the freshman point guard began summer classes at St. Bonaventure.

The Periscope feed offered a window into a small banquet at a tiny private school in Connecticut, where his former teammates at Putnam Science Academy commemorated their 2018 national prep school title. Mustangs coach Tom Espinosa stood behind a lectern and called his players, one-by-one, to the front of the room, where they were each handed a box housing a championship ring.

“Since high school, I always wanted a ring,” Lofton said this week, “and then the ones we got were like nice and big. Some real jewelry.”

These baubles were the size of golf balls, the Mustangs basketball logo and “NATIONAL CHAMPIONS” adorning the face, the bezel ringed by gemstones, the year and team’s 38-4 record engraved on the side. Lofton contributed 10 points, four rebounds, four assists, four steals and two blocks in the title game, a 74-66 overtime victory against Northfield Mount Hermon, transforming himself over the course of one postgraduate season from a high school kid without a reliable shot — or even a Division II offer — into the Bonnies’ starting point guard.

Lofton committed to St. Bonaventure only minutes after Putnam’s championship game victory. And while the Bonnies offered a clear opportunity, graduating their entire starting backcourt, Lofton, at the time, didn’t know he’d earn the starting job from Day 1. He didn’t know that by the midpoint of this season he’d rank second among Atlantic 10 freshmen in scoring (13.7 points per game) and assist-to-turnover ratio (2.00). He didn’t know he’d lead the conference in minutes played (37.3 per game) heading into Wednesday’s trip to Rhode Island.

St. Bonaventure, which finally has all 11 scholarship players healthy, takes a 6-10 overall record and 2-1 conference mark into the game. It’s looking for a season-high-tying third consecutive victory, its first win on the road and to remain just one game out of first place in the conference standings. 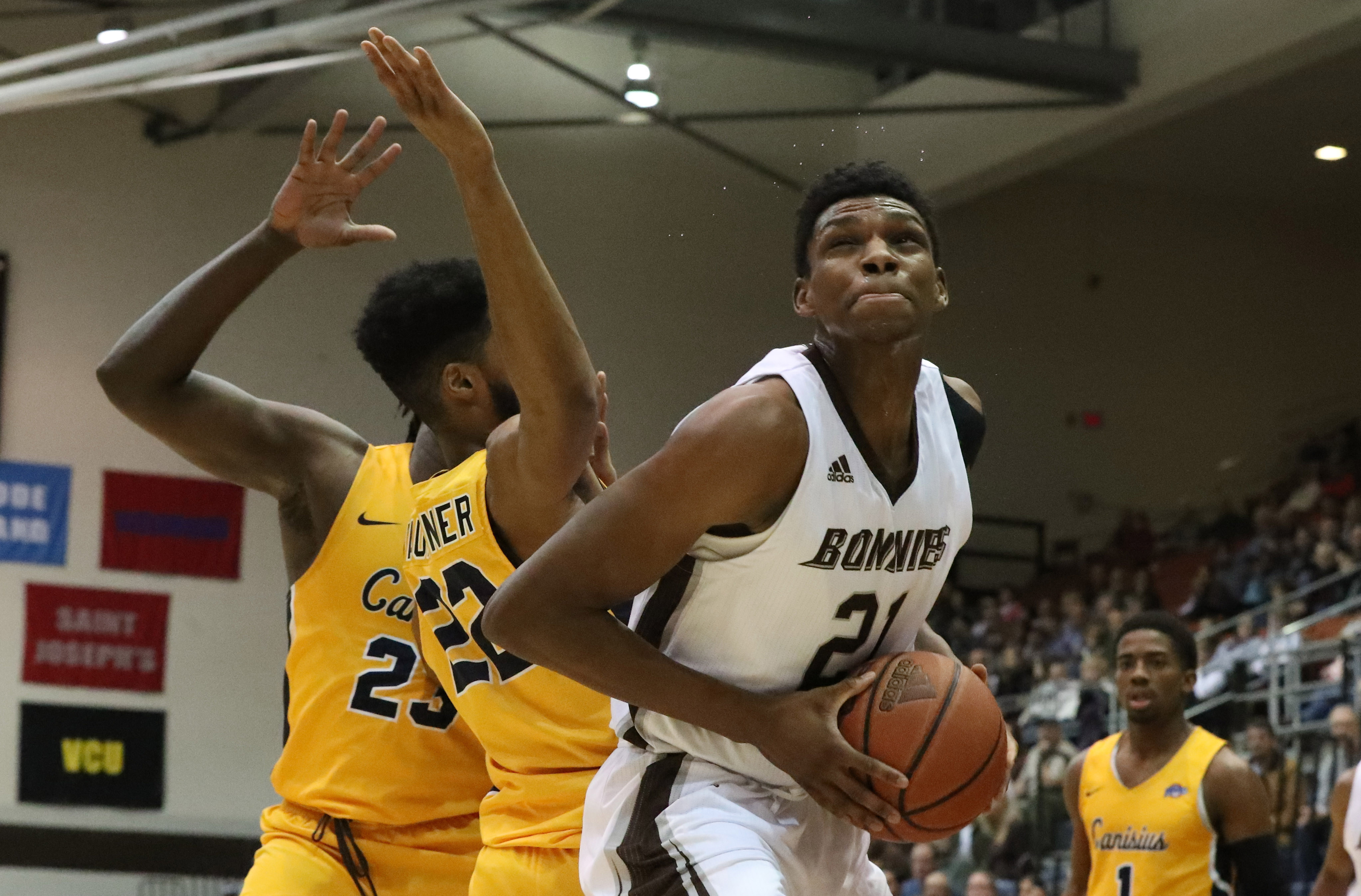 Osunniyi, a 6-foot-10 center with a massive 7-8 wingspan, was named MVP of the national championship game after recording 27 points and 12 rebounds in the victory.

Osunniyi was named the A-10 Rookie of the Week on Monday after breaking into and cementing his role in the Bonnies’ starting lineup by posting double-doubles in victories against Saint Joseph’s and Fordham. He averaged 13 points, 12 rebounds, 2.5 assists and two blocked shots in those games, and leads the conference with 38 blocks.

“Both those guys are so coachable,” St. Bonaventure coach Mark Schmidt said. “They work on their game. They don’t think they have all the answers. And they just continue to get better. Having a point guard and a big guy, that’s from a basketball perspective, that’s your foundation. And we’ve got two really good freshmen that we can build around.”

Osunniyi originally signed with La Salle after sprouting eight inches in high school, but he needed a year of post-grad seasoning to learn how to operate in his lanky frame.

He was granted a release from his national letter of intent after the Explorers fired their coach, and Lofton went to work, delivering his teammate and fellow New Jersey native his best recruiting pitch.

“Me and him got like a good chemistry together,” Lofton said, “so I just told him, since he was already going to an A-10 school, this coach got fired, so why not come join me and play with me?”

Osunniyi announced his new college decision before Putnam’s ring ceremony, choosing St. Bonaventure over Syracuse and Georgetown, in part, he said, because he believed he could thrive in the A-10, in part because he was more comfortable with the small-school atmosphere, and in part to continue honing the tremendous on-court rapport with his point guard.

Thank you to all who came tonight and also followed us on livestream! Couldn’t have done it without you guys! Also big congratulations to Osun Osunniyi on commitment to Bonnies! pic.twitter.com/sCgBEZ6pVv

“The most crucial thing was his relationship with Kyle,” Schmidt said. “It’s really tight. It’s really good. It’s even getting better. But that was the big key. Because if it was just an even playing field, you know, we’ve never beaten Syracuse or Georgetown for a kid ever. So if we didn’t have Kyle, it wouldn’t have happened.”

Back at Putnam, Osunniyi was the final player at the banquet called to the front of the room to collect his ring.

It means a great deal to him.

“It’s a pretty big ring,” Osunniyi said this week. “It’s the first championship in the school’s history, so they went all out. They went all out on this one. I played my butt off every game, so it was kind of just like a little reward, a taste of what can happen if you work hard and play really hard and get to the highest level.”

“Now the last guy, unfortunately he’s not here, but I know he’s watching,” the coach began.

Lofton and Osunniyi are rooming together now. But in the summer, with fewer students on campus, the players enjoy their own space.

When Osunniyi first moved into the dorm, before he even unpacked, he knocked on Lofton’s door and presented a small jewelry box.

Espinosa had given Osunniyi a ring to take to his former and future teammate, and here they stood.

The young men smiled and laughed, imagining for a moment what they might accomplish, together again.