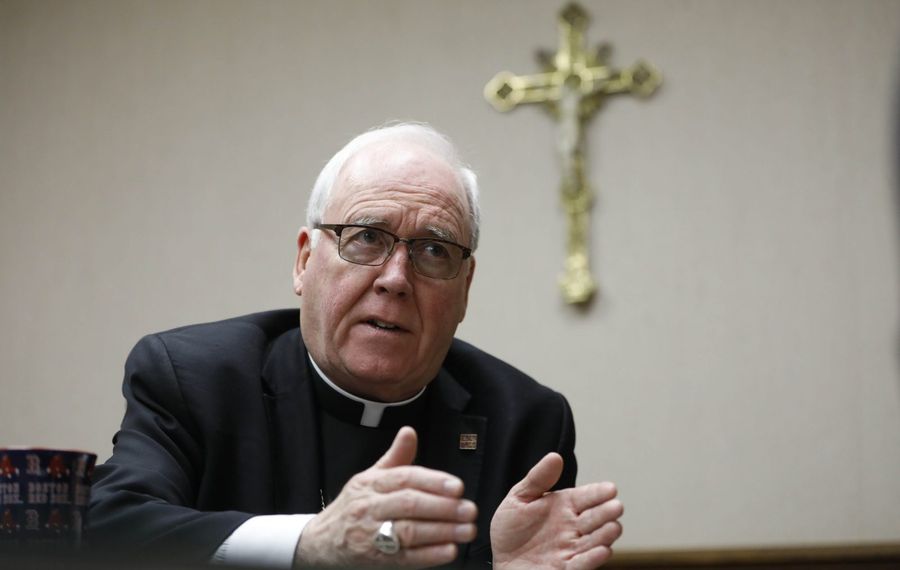 Some local Catholics fuming over the Buffalo Diocese’s sex abuse scandal have threatened to hold back on gifts to the church, and the diocese soon will get a better sense of the depth of that anger.

Catholic Charities – the human services arm of the diocese – on Tuesday launched its annual appeal and said it will seek to raise $11 million in support of programs that benefit more than 150,000 people.

The Catholic Charities board chose to keep the goal at the same level of the past three years, even with the possibility of some Catholics withholding their giving.

Bishop Richard J. Malone said he hoped donors would look past the clergy scandal and the nonprofit organization’s controversial decision last year to give up foster care and adoption services.

“I get the anger and the frustration, but to see the need that Catholic Charities serves is real, it’s deep, it's widespread and all of us have got to be on deck with trying to respond to that,” said Malone. “I don’t think anger at the church or at me even, I don’t think that absolves people from having to look beyond it all and reach out to people in real need.”

Despite the context of the abuse scandal, Dennis C. Walczyk, Catholic Charities' president and chief executive officer, said he was upbeat about the prospects of reaching the goal.

The agency already has received $1.4 million in pledges and cash in hand toward the 2019 appeal from board members and other donors. It’s the most money with which the agency has ever started a campaign, said Walczyk.

A significant portion of the annual Catholic Charities appeal, about 40 percent, will go directly to the diocese, which typically uses the money for such things as campus ministry, diocesan communications and seminary training.

Malone said none of the money raised through the appeal will be used to pay settlements as part of the diocese's program to compensate victims of clergy sexual abuse. The diocese has other sources of revenue for the compensation program, including the pending sale of the bishop's residence on Oakland Place, he said.

“Perhaps some people who out of anger and disappointment with the church might decide to hold back entirely or to put their donation someplace else, that if they had some choices about how to donate, it might help them to continue to support the work we’re trying to do, whether it’s the larger mission of the church in Western New York or the specific mission of Catholic Charities,” said Malone. “I’m hoping most people, or everybody, will chose to do it the way we always have.”

Said Walcyzk: “We wanted to make sure people had a choice. We wanted to in that sense also explain in more details the funds that were going to the Fund for the Faith and what they provide and the ministries they support.”

“We wanted to be very open and transparent about it,” he added.

John Daly, who is a volunteer co-chair of the campaign with his wife Ruthanne, said he hoped the worst of the abuse scandal was past, although he said that news stories on the topic would likely continue to emerge, such as the release on Tuesday of a list of Jesuit priests accused of abuse, including some who served at Canisius High School and Canisius College, his two alma maters.

Nonetheless, he said he was honored to help lead the appeal effort and encouraged by what he’s heard from people who already have donated.

“People have said we want this drive to be successful,” said Daly, managing principal of Trautman Associates, an architectural engineering firm.

The bulk of last year’s Catholic Charities appeal occurred as the clergy abuse scandal first began to unfold in media reports, beginning with a retired priest’s admission to The News that he had molested dozens of boys decades ago.

The stunning admission ultimately led to:

But the scandal intensified after the conclusion of the 2018 appeal, which successfully met the $11 million goal. The agency’s decision to end foster care and adoption services also came after the 2018 appeal ended.

The agency made the move after a gay couple applied for approval as an adoptive or foster adoptive couple. State law bars discrimination based on sexual orientation, and agency executives said they could not accept a same-sex couple as parents because the Catholic Church doesn’t recognize same-sex marriage.

The agency opted to close down the program, further upsetting some Catholics who viewed it as an abandonment of a core mission of Catholic Charities.

“We really had no choice,” said Walczyk. “We couldn’t follow two masters and be compliant with our contract.”

About 80 percent of Catholic Charities appeal monies come from Catholics through their parishes, and Malone described Tuesday’s kickoff as “one of the most significant moments, really, in the diocesan year.”

The appeal runs through the end of June.