Travis Yost has been involved in the world of hockey analytics for a decade and is currently part of TSN's Hockey Analytics team. Prior to joining TSN, Travis was a contributor at the Ottawa Citizen, the Sporting News and NHL Numbers, and has been a consultant for an NHL franchise. He will be contributing breakdowns on the Sabres for The Buffalo News this season. Follow Travis on Twitter: @travisyost.

On Nov. 27, the Sabres were in first place. Not in the division. Not in the conference. But across the entire league.

Six weeks later, things are, well, different. Buffalo sits ninth in the Eastern Conference and 14th in the league standings. Only one team – the New York Rangers – has played worse over this stretch.

The massive cushion that the Sabres put on the majority of the playoff field in the East has all but dissipated, and most estimates of their playoff likelihood show them barely on the right side of a coin flip right now.

One thing that’s been eminently noticeable during this stretch is that the Sabres have played a tougher schedule of late, and in those games, they have really looked outclassed. The stretch has included multiple games against the Bruins, Capitals and Lightning, along with spot games against the Predators and Maple Leafs. Those aren’t just five "playoff" teams, but rather five teams with legitimate Stanley Cup aspirations. That’s why the January schedule in particular looked so daunting.

To the eye, it seems that they have been tremendously outplayed in the majority of these spots. And this isn’t all that surprising. We are still talking about a team in the middle of a rebuild, and even at their peak of performance in October and November, they were a relatively shallow team that relied on exceptional production from the team’s top line.

Things have expectedly regressed a bit there, and what we have been left with is a team that’s struggling against some of the better competition.

If you look at Buffalo’s performance splits depending on the quality of competition they have faced, the numbers are jarring. I think it’s indicative of what we would expect from a playoff tweener team – they are capable of playing well against some of the weaker teams in the league, but when the competition stiffens, the Sabres are sawed off pretty easily. 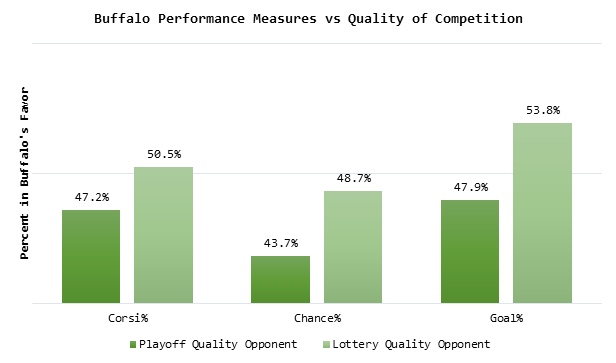 These deltas are significant. When Buffalo’s playing a playoff team – effectively 15 of the 16 best teams in the NHL – they look like a lottery team, with 47 percent of the shots and goals, and 44 percent of scoring chances at 5-on-5.

When they are playing a team apparently headed for the draft lottery, those numbers reverse: They outshoot and outscore their competition fairly emphatically, and their scoring chances are at least much closer to break even.

Season to date, Buffalo has accumulated 25 points in 25 games against these playoff teams, which doesn’t seem all that bad. But it’s also heavily boosted by some of their early season performance. Over the last 10 games – and really through the six-week stretch we are talking about here – Buffalo has managed just five points, which has not only helped to sink them in the standings, but has reallocated those game points to other playoff competitors that are separately jockeying for playoff position.

I’m not sure Sabres fans care as much about playoff seeding as simply making the postseason in a year when they figured to be on the outside looking in. At any rate, Buffalo’s situation is much more precarious today than it was just a short time ago.

Even with a playoff bid, the odds of playing one of the East’s juggernauts in the first-round – think Tampa Bay or Washington – are increasing with each passing game. And now the team is headed for a critical five-game road trip, with three of those games coming against playoff teams.

The stress only increases from here.