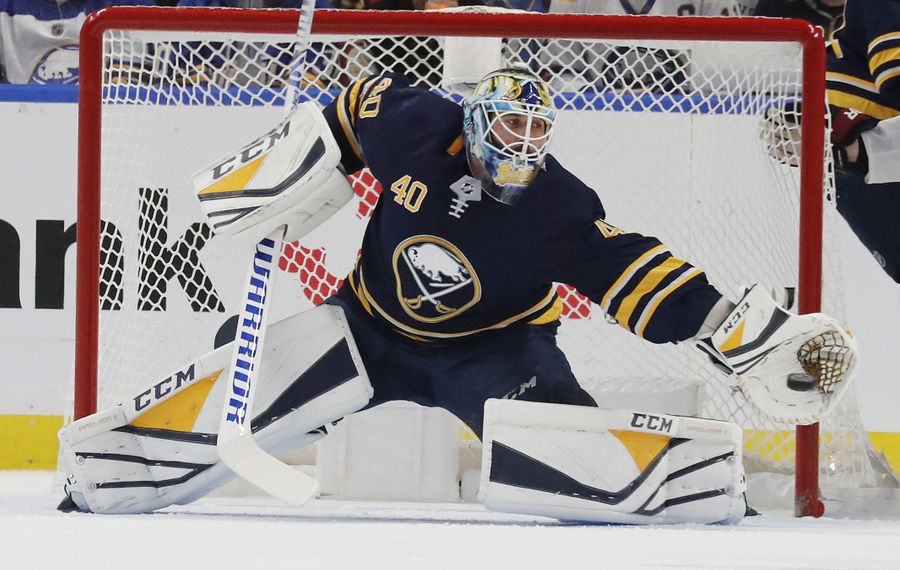 EDMONTON -- When the Buffalo Sabres lost by four goals in San Jose on Oct. 18, coach Phil Housley put his lines in a blender and those changes sparked a remarkable run, including a 10-game winning streak.

Housley may be forced to make similar changes after the Sabres' 7-2 loss to the Edmonton Oilers in Rogers Place on Monday night. Buffalo, now 23-17-6, has won only six of its last 21 games and one of its last 10 on the road to fall further out of the Eastern Conference playoff race.

Carter Hutton was pulled less than six minutes into the second period after allowing five goals on 12 shots, though his teammates gave him little help.

The Oilers' Connor McDavid scored his 28th goal of the season on a second-period breakaway. Milan Lucic and former Sabres first-round draft pick Zack Kassian each had two goals for the Oilers.

Leon Draisaitl pushed the lead to five goals when he scored on the power play with 14:44 left in the third period, and Ryan Nugent-Hopkins also had a first-period goal. Entering the game, Edmonton (22-21-3) had a negative-18 goal differential and was sixth in the Pacific Division.

Casey Mittelstadt scored his seventh goal of the season one minute into the game and Evan Rodrigues cut the deficit to 3-2 by scoring 8:57 into the first for Buffalo, which outshot Edmonton, 43-25.

Koskinen again: Oilers goalie Mikko Koskinen, who had started only one of the team's previous four games, made key saves in big moments, including a glove save on Tage Thompson with 6:53 left in the second period.

Opening salvo: Mittelstadt caught the Oilers during a line change when he rushed up ice and passed to Conor Sheary, whose shot from near the left-wing boards was deflected by Mittelstadt into the net for a 1-0 lead.

1:55: The Oilers answered with three goals in one minute, 55 seconds. Kassian collected a pass near the left-wing boards and his shot was deflected off Zach Bogosian's stick and past Hutton.

Fifty seconds later, Sam Reinhart was unable to clear the puck out of the defensive zone and it was collected by defenseman Caleb Jones near the blue line. Jones' shot was deflected off the shaft of Nugent-Hopkins' stick and over Hutton's glove to make it 2-1.

Lastly, Sabres defenseman Nathan Beaulieu seemed confused in defensive coverage and left Kassian open in the slot to one-time a centering pass from Tobias Rieder into the net with 15:32 remaining in the first period.

Drought ends: When Rasmus Ristolainen's shot was blocked, Rodrigues collected the loose puck in the slot and had plenty of time to release a shot over Koskinen's glove to cut the deficit to one. It was Rodrigues' third goal of the season and his first in 14 games.

Strange first: Despite the one-goal deficit, the Sabres controlled the puck for much of the first period with more shots (16-8) and shot attempts (28-12).

Rasmus' run: With his secondary assist on Sheary's goal, Rasmus Dahlin has 21 assists in 46 games this season, including five in his last four games.

Scandella turnover: Sabres defenseman Marco Scandella turned the puck over right to Lucic in the defensive zone, and his shot over Hutton's blocker made it 5-2 with 15:11 remaining in the second period.

Power-play woes: The Sabres went 0-for-4 on the power play and are 2-for-22 over their last seven games.

Next: The Sabres will practice Tuesday in Calgary to prepare for a Wednesday night game against the Flames in Scotiabank Saddledome. Puck drop is 9:30 p.m. Eastern.