Jamie Billquist remained unsure until a few days ago. For weeks, he had left it open about whether he would speak Monday in Chautauqua County Court, where Thomas Jadlowski faces sentencing for accidentally killing Billquist's wife, Rosie.

Billquist learned that making such a statement can involve some formal preparation. Because a defense attorney has the right to object during a sentencing proceeding, District Attorney Patrick Swanson suggested a measure of caution. He asked Jamie if he would mind writing out his thoughts for a quick conversation and review before offering them Monday morning.

"I don't want to go through all that," said Jamie, who will be relieved when the long court process finally reaches its end. While Swanson said Jamie, 48, will have the chance to speak spontaneously after Jadlowski, 34, is sentenced for criminally negligent homicide and hunting after sunset, Jamie is leaning against it.

For more than a year, he has tried to make his statement with his life.

Fourteen months ago, in Thanksgiving week of 2017, Rosie was walking Stella and Sugar, the couple's dogs – two yellow labs they brought home from a rescue operation – in a field behind their home in Sherman when Jadlowski, a neighbor, shot Rosie in the evening darkness. Jamie found her after the dogs came home alone.

Jadlowski, a longtime neighbor, told Chautauqua County Sheriff's Office investigators that he mistook Rosie for a deer. Jamie, in disbelief, mourned his 43-year-old wife at a funeral service that packed the Sherman Community Church. He buried her in the Sherman Cemetery beneath a stone with two linked hearts, a monument he sees almost every day as he travels to his job with Pepsi-Cola. 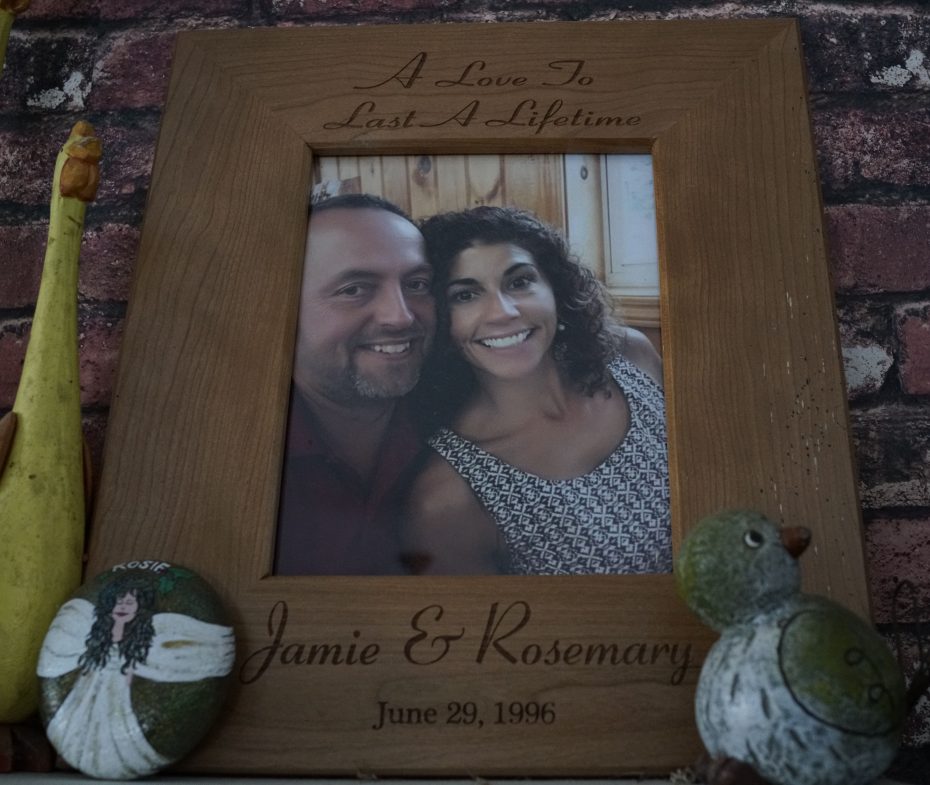 A photograph of Jamie and Rosemary Billquist is displayed in the kitchen of their home in Sherman. (Derek Gee/Buffalo News)

In many ways, he and Rosie, married 21 years, had different interests. Jamie would show up to watch Rosie run her marathons, while she was amused by his affinity for mosh pits at rock concerts. What they always nurtured is the most important point of communion.

They were best friends. They found relief and comfort in each other's company. Jamie spent each working day looking forward to the next time he saw Rosie.

That is what he lost when his wife died.

While Jamie has not heard from Jadlowski since December's guilty plea, there will almost certainly be an apology in court. "My client and his family have wanted to offer their condolences to Rosemary's family from the moment this happened," said Michael Robert Cerrie, Jadlowski's lawyer, in a statement released Friday.

For legal reasons, Cerrie recommended against any formal apology until a plea was made. Jadlowski, he said, is glad to finally have the chance. As for the sentence, while the two counts carry maximum prison time of four years, Cerrie and Swanson said Judge David Foley will decide between a sentencing range of a year to 15 months, before Jadlowski would be eligible for parole.

In his paperwork, Cerrie asked Foley to consider that Jadlowski stayed with Rosie and tried to administer first-aid, that Jadlowski called 911 when he realized what happened – and that remorse about his actions will always stay with him, no matter what the judge decides.

Jamie does not argue that point. "I don't think he's a cold-hearted person, and I know he's living with this," Jamie said.

He has no wish to see Jadlowski locked up for a major portion of his life. Jamie's greatest  concern is about the message sent out Monday. He hopes Jadlowski can fully grasp the way one ill-planned and thoughtless act cost the world someone of immeasurable value, a loss that needs to echo long after the sentencing.

"It's pretty cut and dry," Jamie said. "Whatever the judge hands down, he hands down. Ultimately, I just want a lesson learned, and I guess he's not really going to learn any more from 10 years in prison than he would in two."

As for defining that lesson?

To Jamie, it is that in "a world that seems like a train wreck," a world where an increasing number of people seem to lose themselves in anger and impatience and contempt, his wife was the polar opposite. She loved bright colors, which she proved with her array of hats and the way she wore her nails, and they reflected a warmth and presence that you felt when she walked into a room.

Rosie, who worked at UPMC Chautauqua WCA Hospital in Jamestown, routinely and quietly stopped to see elderly shut-ins if she learned they had no visitors. She was a passionate advocate for abandoned animals, and throughout their marriage there was always a rescue dog or two – as well as their cat "T" – listening for the door each day, until she came home. 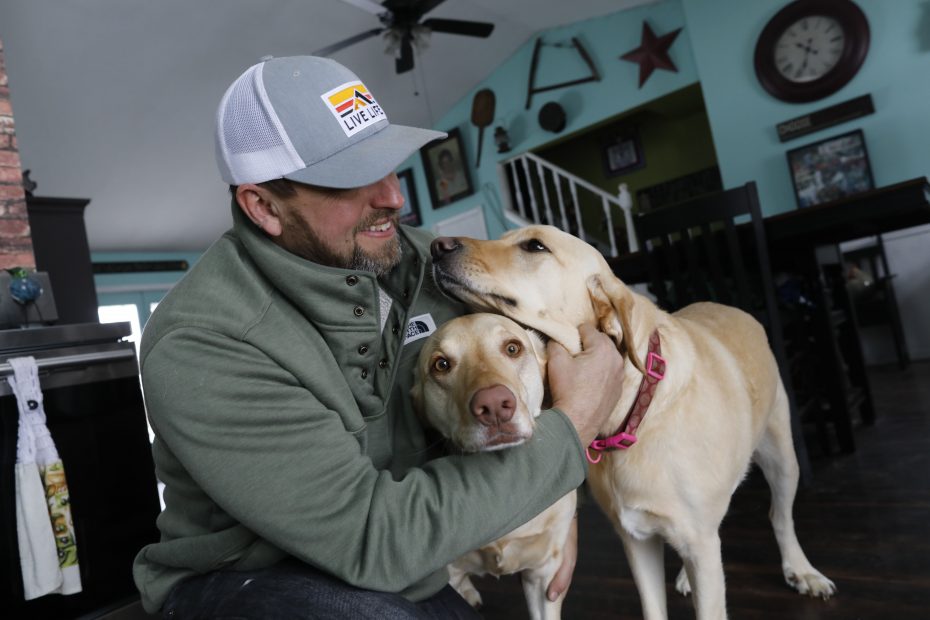 Jamie Billquist gets a little love from his dogs Sugar and Stella in the kitchen of his home in Sherman. (Derek Gee/Buffalo News)

Once you met Rosie, Jamie said, you quickly sensed she had an affinity, a gift, for comforting and inspiring people who were in pain. "She changed my life," said Jamie, who first encountered her almost 30 years ago, when they were teenagers wandering the Chautauqua Mall. "I wish I was a quarter of the person that she was."

He said he is trying to handle the sentencing – and his feelings about Jadlowski – in a way he believes Rosie would have wanted. The nature of that response is often on his mind in his quiet home as he does the dishes and the laundry, as he takes the dogs for long walks on the trails Rosie loved.

Throughout the week, he puts up thoughtful and funny posts – often inspired by Rosie – on Instagram and Facebook, and he finds relief and joy in the company of loyal friends. He posted a Facebook Live message to hunters recalling Rosie, as a communal reminder of simple rules of safety. He is deeply involved with two new road races and a golf tournament that raise money for causes Rosie cared about, including a memorial fund created in her honor.

The passionate response to those efforts helps Jamie remember "there are a lot more good people around than you think." Swanson, the district attorney, said that list certainly includes Jamie himself, described by Swanson as "a stronger man than I think I could be."

Jamie said that approach is a survival skill. Stay busy enough, and you avoid thinking about how everything might have been different if Rosie had come home from work five minutes earlier that night. Stay busy enough, and maybe you do not have time to be overwhelmed with sorrow every time the radio plays "Love of a Lifetime," their wedding song.

He will have the chance, if he wants it, to try and put it all together into words before the judge. If Jadlowski does offer an apology, Jamie will listen intently before deciding if something else still must be said. What he hopes Jadlowski can somehow understand is that in a hard way they now share one purpose, built upon unthinkable loss from that gunshot in the dark.

The only statement of grief that really matters is living a life to honor Rosie's, far beyond one day in court.