Eight years in that fertile environment was ideal for learning about the industry, and his education - as well as his own home-brewing experience - fueled McLaughlin's desire to open his own brewery.

On Jan. 12, McLaughlin, joined by business partners Eli and Travis Hale, will debut Froth Brewing at 700 Military Road, where North Buffalo and Riverside meet. The new brewery is a 10-barrel operation - which puts it in the microbrewery category - equipped with five, 20-barrel fermenters, which means Froth can quadruple its output or brew double batches in the future.

The brewery-taproom, which holds 95 people, has an entrance on Skillen Street and accommodates parking for roughly 40 cars. Given Buffalo's long winters, the owners aimed for a cozy, lodge-like feel through dim lighting, wooden features and a spacious taproom with ample seating. A patio will be built for the warm-weather seasons. 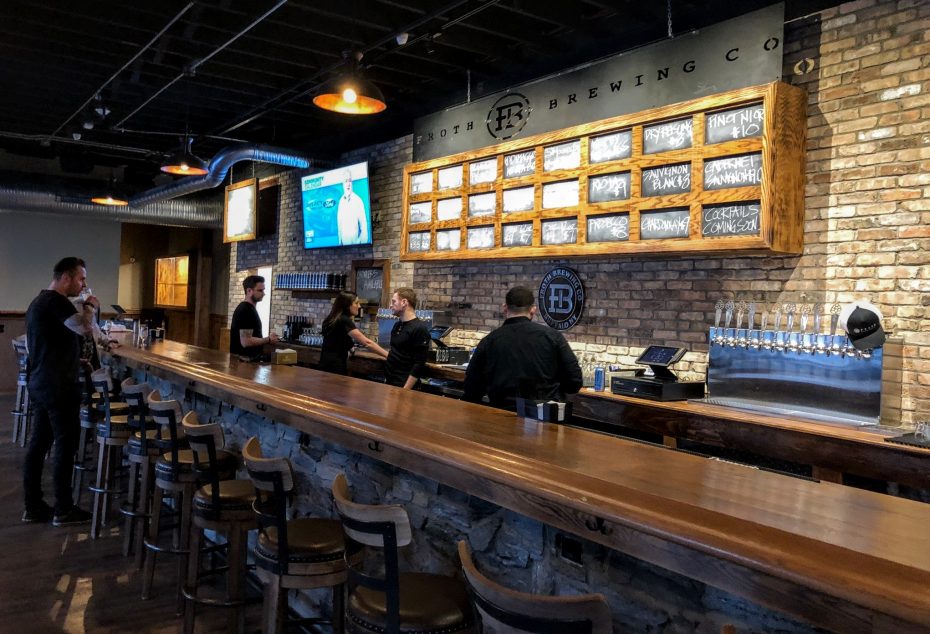 "Our motto is quality over quantity," McLaughlin said the night before Froth opened. "We wanted to do our place a little different: More new edge, not the standard kind of warehouse brewery."

"We wanted to change the idea of what a brewery could possibly be," Eli Hale added.

[Related: Craft brewery movement shows no signs of slowing down in Buffalo area]

Five house beers are available from the start, in 5- or 12-ounce pours ($3.5-$7) or as a flight of four ($12). Despite McLaughlin's West Coast influence, three of Froth's first beers are New England-style: the Bread (IPA), the Autograph (blonde ale) and the DiMaggio (DIPA, McLaughlin's favorite), which spotlight a range of different hops and embrace the trend of haziness, but tend to be only mildly bitter.

Loyal to the Grain, a German pilsner, is light, refreshing and a nice transition beer for domestic drinkers eyeing a local craft list. The Mounds Bar, a chocolate stout conditioned on 100 pounds of toasted coconut, is smooth yet higher in alcohol content (6.8 percent) than many dark beers. Two sets of 12 taps are available, so expect the list to grow; sour beers will be added to the list in a few weeks. 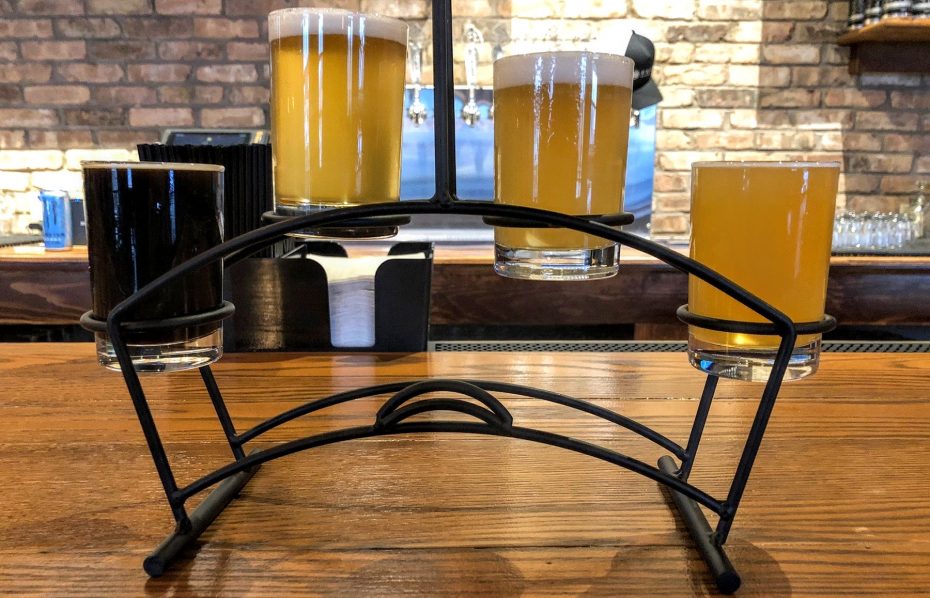 From left is the Mounds Bar (stout), Loyal to the Grain (pilsner), the Autograph (New England blonde ale) and The Bread (NE IPA). (Ben Tsujimoto/Buffalo News)

Froth is one of a few local breweries with a tank-to-tap system, which emphasizes freshness by minimizing the beer's exposure to dissolved oxygen. The brewery will keg its beer as well. Seven wines - weighted toward Italy and France - grace the initial list, with glasses from $8-$10 and bottles $30-$40. Liquor is on the way, too.

West Seneca East alum John Herrmann, who previously worked banquets and catering for Oliver's, will handle the kitchen responsibilities at Froth, with an upscale bar menu that touches on prime-rib sliders (three for $14), wings (in eight styles, 10 for $13), chicken fingers (also eight styles, five for $10), fried calamari ($12) and a charcuterie board ($14). 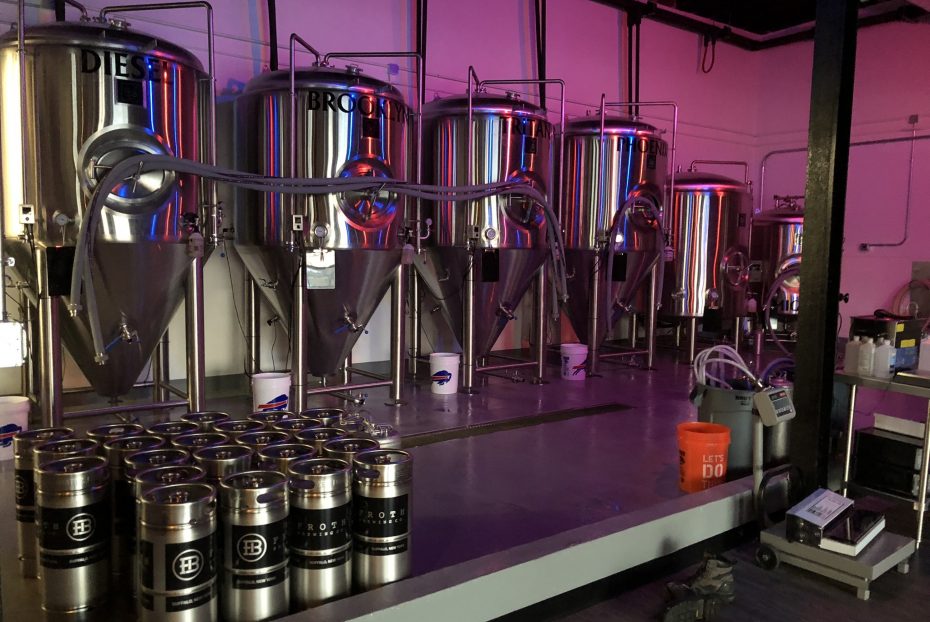 The fermenters at Froth Brewing can be bathed in an assortment of colors, but the owners will alternate between Sabres and Bills colors. (Ben Tsujimoto/Buffalo News)

A grand-opening party will be scheduled within the next few weeks, Travis Hale said. Keep eyes peeled to Froth's Facebook page for further updates.

The road to Froth's debut wasn't entirely smooth, as McLaughlin scrapped original plans to open at the southeast corner of Hertel and Colvin avenues, turning his attention to 700 Military in February 2018. 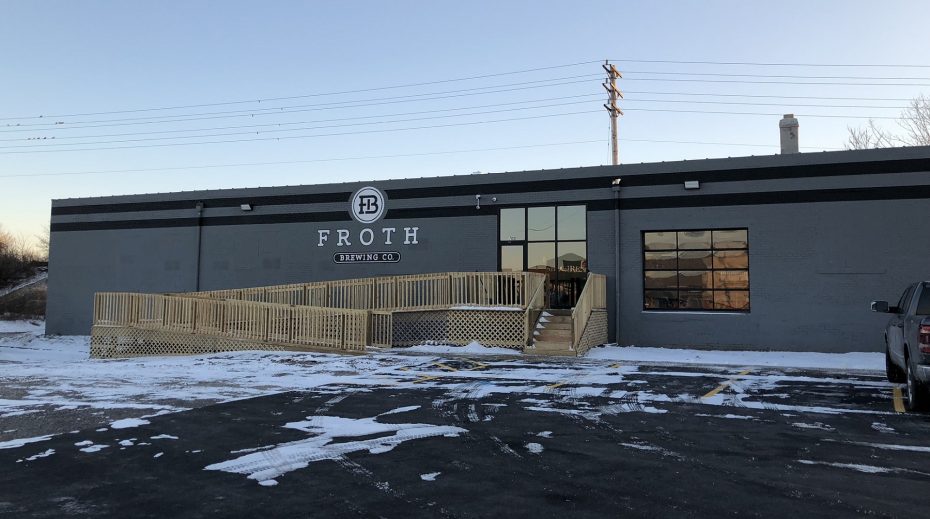