Ed Vidler, the president of the iconic Vidler’s 5 & 10 store in East Aurora, died Saturday morning, according to a post on the store’s Facebook page. He was 90.

The son of Bob Vidler Sr., who founded the store in 1930 after he learned that his mother-in-law had to leave East Aurora to buy a spool of thread, Mr. Vidler became the face of the business in folksy commercials with his older brother, Bob Jr., in 1980s.

Caricatured in a statue sitting with its legs hanging over the roof of the store, he has presided over the village’s Main Street for the past 10 years.

A 1946 graduate of East Aurora High School, he went on to earn a degree in retailing from Rochester Institute of Technology in 1950.

He began working in the store as a teenager. He and his brother, who joined the store after he was discharged from the Navy in 1945, bought the business from their father in 1953.

Over the years, they expanded Vidler’s by buying buildings next door. They resisted the urge to modernize in the 1960s and kept the old-fashioned red-and-white facade, the original fixtures and the wooden floors that give the store its charm. In recent years, it has become a favorite with tourists.

The Vidlers began print advertising in the 1970s to compete with a new shopping plaza that was built on the edge of the village and then turned to television.

Mr. Vidler credited the store’s success to its smallness and independence.

“That’s our advantage over a big chain,” he told The Buffalo News in 1990. “We don’t have marketing surveys and consultations with 10 departments before we do something. We can decide in 10 seconds.”

By 2000, he had cut back to working 40 hours a week. His daughter, Beverly, and later, his son, Don, took over day-to-day operations of the store.

He was predeceased by his wife, the former Virginia Dawson, who died in 1986, and his brother, who died in 2013.

He was remarried in 1990 to the former Patricia Richmond, who survives.

In addition to his wife and children, survivors also include two step-sons, Jim Richmond and Hal Richmond; nine grandchildren and six great-grandchildren.

A celebration of his life for family and friends will be held at time to be arranged. Visitation will be held from 3 to 8 p.m. Thursday, Jan. 17, in Kenneth Howe Funeral Home, 64 Maple
St., East Aurora.

On Facebook, his family invited friends and customers to raise a glass in his memory, saying, “Kind, humble, polite, optimistic and always ready with a really bad pun or corny joke, dad wouldn’t want us to mourn but to celebrate what he considered his wonderful life.” 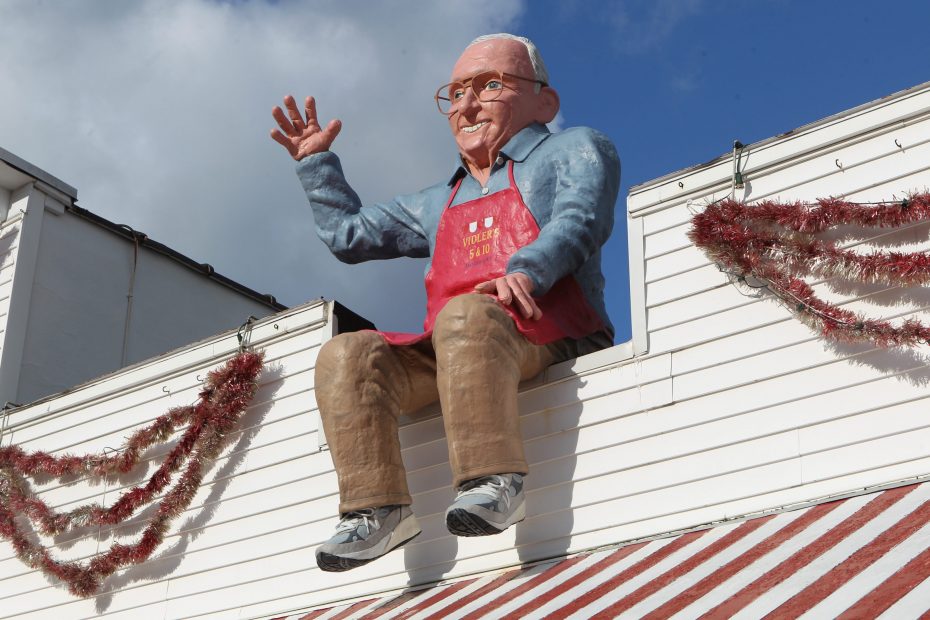 Ed Vidler, the "Vidler on the Roof," is seen atop the venerable emporium on Main Street in East Aurora. (Sharon Cantillon/News file photo)