Construction crews are finishing up work in parts of the gray-and-glass building, including the hotel rooms, residential units, event center, retail space and other amenities, even as they showcased their $70 million project to local media on Thursday.

But officials are already making plans to begin welcoming hotel guests and apartment tenants by March 1, followed by the bulk of the event space by March 30, the rooftop bar by April or May, and the six-lane public bowling alley in the basement by June. Hotel pre-sales have already begun.

And all signs are already pointing to a success, as five of the 12 apartments with floor-to-ceiling windows are rented – for as much as $4,800 in rent per month (that's more than $57,000 a year) – while the first event is already booked for early February, even before everything else is open.

"We’re extremely happy with the way the building has turned out," said Lynn Gannon, director of residential leasing for Ellicott. "You can’t beat these views."

The opening of the project – the largest and most complicated endeavor that owners Carl and William Paladino have undertaken – marks the latest example of what hadn't been seen in decades in downtown Buffalo until recently: New construction of large-scale, privately owned buildings that dramatically change the city's skyline.

It follows the building of Catholic Health's headquarters in 2014, the opening of HarborCenter at Canalside by Terry and Kim Pegula in 2015, and the completion by Uniland Development Co. of the Delaware North Building at 250 Delaware, which opened in 2016.

What makes 500 Pearl, Delaware North and HarborCenter different is that they are privately funded and rely much less on public support, although they still used some components. And instead of reusing existing buildings, these projects were mostly ground-up construction. The Buffalo Christian Center building, with four floors and 60,000 square feet, is a small portion of the 500 Pearl project.

Over the last six years, Buffalo has seen tremendous redevelopment of older and underused office buildings, factories, warehouses, schools and churches, but most of that activity retained the original shell and exterior. Even the remake of the Donovan State Office Building into Benderson Development Co.'s One Canalside and the transformation of the Dulski Federal Office Building into Uniland's Avant Building retained the core steel frames.

Those initiatives also relied heavily on government incentives, especially historic, brownfield and housing tax credits. Otherwise, developers and city officials have said, those projects would not be financially feasible.

The 500 Pearl complex – which totals 380,000 square feet in size – features a six-level parking ramp with 390 spaces, 12 luxury apartments, two party suites, two floors of office space, and a 110-room Aloft Buffalo Downtown hotel on the top three floors. There's 17,000 square feet of meeting and event space, in multiple rooms and the Forbes Theater, plus the bowling alley, a pool, steam room and fitness center, and at least two restaurants.

"We think the location is perfect," said Ellicott CEO William Paladino, citing the distance from the other tall buildings in downtown Buffalo and on the Medical Campus. "It’s going to be a great landmark for downtown." 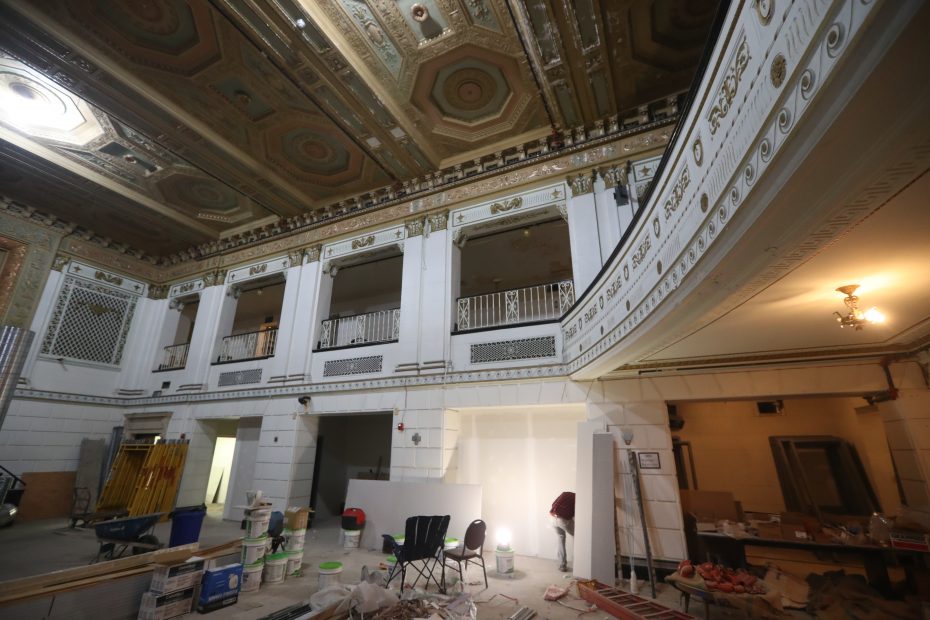 The Forbes Theater in the old Christian Center is being renovated as part of the 500 Pearl project. (John Hickey/Buffalo News)

Designed by Kideney Architects, it was built by LeChase Construction on the site of a former parking lot, while also incorporating the historic former Fraternal Order of Eagles and Buffalo Christian Center building that dates to 1914.

It thus represents a unique combination of new and old, with the adaptive reuse of an historic building as part of a much larger project that retains the historic character of one portion while integrating it with a modern structure and functions erected from scratch.

The new 500 Pearl is anchored by the Aloft, one of Marriott Corp.’s newest brands, and will be targeted toward corporate, convention and meeting business during the week, with leisure travelers, weddings and social events on the weekend.

In all, there are 60 queen rooms, 43 king rooms and seven king suites, with a wet bar and living room. Of the 110 rooms, 102 have unobstructed views of downtown Buffalo or Lake Erie, with one, two or even three walls of storefront-style glass, said Sarah Bishop, director of sales development for Ellicott Hotels. Company officials said the Aloft is also the only hotel in downtown Buffalo with accessible balconies, featured in 23 guest rooms.

“The best amenity of the hotel is the views,” Bishop said. 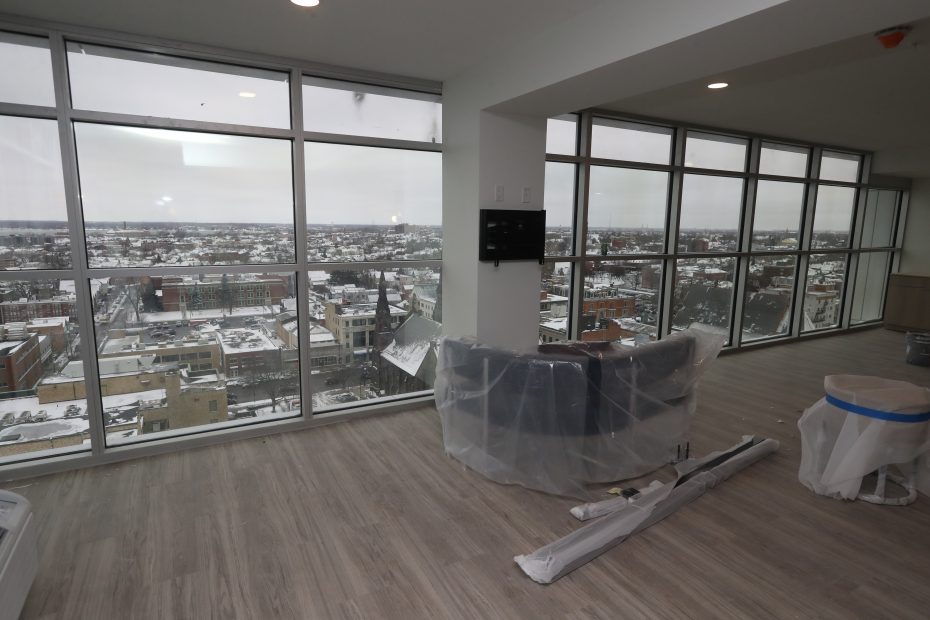 The tower will also include a 4,000-square-foot, oval-shaped rooftop bar – the highest in downtown Buffalo, officials said – with one portion enclosed by glass, while the surrounding perimeter for soft seating, communal tables and fire pits is open to the elements. It can handle up to 200 people, with a kitchen for food and beverage service.

The ninth-floor luxury apartments include nine two-bedroom units, two three-bedroom apartments and a single one-bedroom unit, ranging in size from 1,115 to 2,375 square feet.

Rents will vary from $2,750 to a high of $4,800 per month, but include two parking spaces, access to the pool and fitness center, and discounts at the restaurants. “It’s on the higher end, yes, but we had a lot of interest,” Gannon, Ellicott's director of residential leasing, said. “The $4,800 is already gone.”

The seventh and eighth floors consist of 52,000 square feet of office space. One tenant has already leased half of the upper floor, while Ellicott officials are negotiating with another for the remainder of that level.

The hotel lobby is being renovated to retain its historic ceiling and other features. It can be accessed from Pearl, Franklin and Tupper streets. There are also three retail spaces, including one for a 7,000-square-foot restaurant.

Upstairs, the former Fraternal Order of Eagles buildings features eight event spaces, including the 5,261-square-foot Grand Aeries ballroom on the second floor that had been used as a roller rink for years. And there's the Forbes Theater and its hard seating balcony, which can handle as many as 850 people for a performance or lecture. Promoter Chris Ring will be booking events for the theater, which will also have a bar in back and an outdoor patio.

The bowling alley in the basement was a later feature that was added after company officials found photos of the building from 1914. Ellicott worked with bowling facility operator AMF to restore the alley, which will now be the only publicly available bowling alley in downtown Buffalo.