Extrapolating these characteristics to Josh Allen, how does he compare to the last three Super Bowl-winning quarterbacks – Peyton Manning, Tom Brady and Nick Foles – in these categories and what steps can he take to develop himself into the Bills’ franchise quarterback?

The career completion percentages of the last three Super Bowl-winning quarterbacks are Manning (65 percent), Brady (64 percent) and Foles (61.6 percent). This is a very significant characteristic as all of these players are gifted passers.

Being an accurate passer begins with having disciplined footwork and solid sagittal throwing technique. Footwork includes shuffling in the pocket, throwing on the run, having a “rhythmic” sense of timing for deeper routes and the ability to throw the football decisively in “quick” passing situations. Footwork is the base of all accuracy and is essential to being in the correct position to deliver the football accurately. Footwork is a key element in Allen's development and been a point of emphasis since his arrival with the Bills.

Throwing technique is another necessary principle enhancing accuracy. The great Tom Martinez used to say that a quarterback’s front throwing shoulder is like the tires on a car – if the shoulder goes right or left, so goes the car. Maintaining the utmost discipline with the front “target shoulder” is critical to minimizing rotation, giving quarterbacks the best sagittal technique, concentrating all of their forces towards their target. 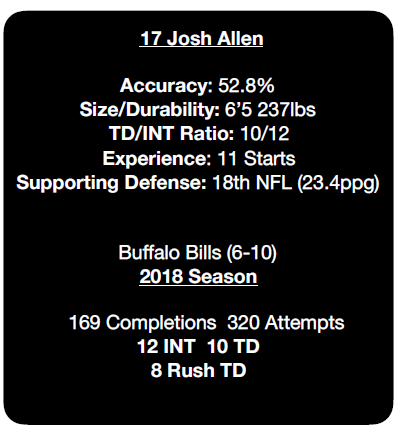 Allen was a 52.8 percent passer as a rookie. The first order of business for Allen is to begin the process of refining his footwork and throwing technique. His feet are often undisciplined and too wide. This creates an “overstrided” position, which prevents his hips from getting over his front knee, resulting in high, all upper-body throws. This overstrided position at times makes him a “low elbow” thrower.

Accuracy is not just about arm talent; it is about footwork, technique, consistency and knowing where to attack and when to hit the checkdown.  I believe that players can improve in this area dramatically with the right work and focus.  Allen has a great arm, but he is not disciplined enough – yet – to get to 60 percent. Do I think he could if he wanted to? Yes. Will he work and focus that hard? This is the question we are all waiting to see.

He can develop and improve his trajectory and touch by throwing into cylinders in reception areas down the field. Dan Henning used to refer to this concept as “playing above the rim." This additional command and control of the football would be a wonderful addition to his natural velocity.

The bottom line, according the the previous three Super Bowl quarterbacks, is that championship-caliber teams have quarterbacks who are good enough from the pocket to get the job done. He needs to be a 61 percent completion percentage passer or better.

Being physically big enough to take the pounding is essential to making it from week to week. Strength and durability are vital to being pummeled and staying healthy. Great physical size and strength enable these players to absorb hits, get back up, and go to the next play.

Allen has comparable size at 6-5, 237. We already have seen him take hits that would put most of us in the hospital. He is a physically strong player with an uncanny ability to move around. This size and durability is essential to staying healthy into the playoffs and beyond.

Manning, Brady and Foles have all established a two-to-one touchdown-to-interception ratio in their careers. Players with this statistic know how to protect the football. This ratio also speaks to their efficiency, preparation and execution. These are players that score points from the pocket.  They understand coverage, protections, trajectory, timing, and have the ability to deliver the football under all circumstances to their targets. 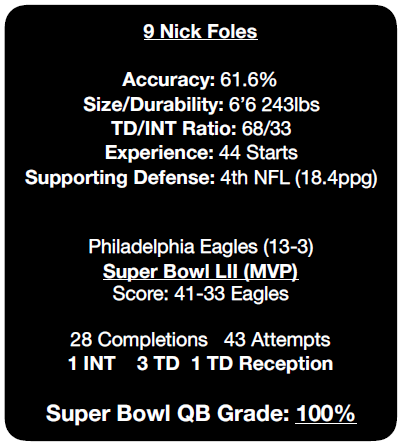 Allen has slightly less than a 1:1 touchdown-to-interception ratio (10 touchdowns, 12 interceptions). It will be important over the course of this offseason for Allen to get in the film room and study the great quarterbacks in the NFL. It is possible to develop and improve preparation skills, learning from the very best on how to attack defenses through film study.

Offensive coordinator Brian Daboll must also continue to work with Allen on the things he does well to bring the best results out of his performances, much like he did in the second half of the season. Protecting the football, being mentally prepared, knowing where the checkdowns are and being patient enough to throw the ball under the coverage will enable Allen to raise his touchdown-to-interception ratio.

Most importantly, Allen needs to be aware that this ratio matters to success of his team, and that he can take concrete steps to enhance his productivity from the pocket.

These Super Bowl quarterbacks all had at least five years of NFL experience. Players need time to understand and digest the complexities. They require years of study and preparation to be able to function at this incredible level, particularly in the playoffs and Super Bowl.

Allen cannot speed up time, but he can improve his study and work habits to make himself into the most prepared second-year quarterback in the NFL next season. Studying situations, defensive players and quarterbacks around the league can have a positive impact on his own performance. An offseason filled with detailed film study can accelerate his experience level.

Another important discovery in my study is that each Super Bowl quarterback was supported by an outstanding defense. In fact, each of the respective defenses were fourth or better in the NFL in “points against.” The defenses of the 2017 Eagles, 2016 Patriots and the 2015 Broncos all gave up an average of 18.5 points per game or less.

The Bills were 18th in the NFL this past season in overall defense, giving up an average of 23.4 points per game. The Bills must improve in this category to be successful going forward.

One sure way to grow an offensive system is to maintain stability among a coaching staff and their quarterbacks. Manning was with Gary Kubiak for four seasons until he won the Super Bowl. Tom Brady has been in New England for 18 years. Nick Foles was drafted by the Eagles, spent time with St. Louis and Kansas City before returning to Philadelphia in 2017 for his Super Bowl appearance. It takes time to grow into a system and way of doing things.

Daboll is smart and experienced, having worked for two legendary defensive coaches, Bill Belichick and Nick Saban. Daboll has seen it all and I fully anticipate that he can and will get the best out of Allen’s skill set in the coming years.

Maintaining congruency in the Bills' offensive system will be a key factor in elevating performance to championship level.

Leadership is the intangible element of the quarterback position that can make or break a football team. 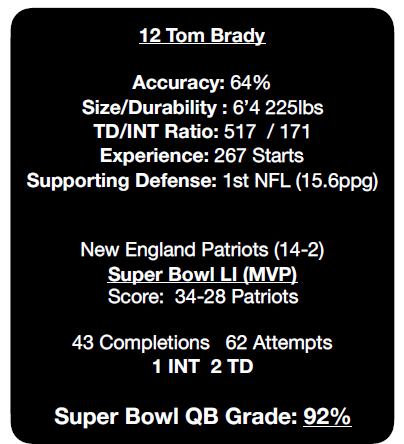 I have personal experience with Peyton Manning and other iconic quarterbacks and have witnessed them display a level of leadership essential to the success of their football teams. As the vocal leader of the Colts, Manning had an insatiable hunger for greatness. He was light in the locker room, serious on the field and his work ethic was unparalleled. He was always watching additional film before and after practice. Without question this is what made him one of the greatest players of all time.

Belichick is the conductor of the Patriots machine and Brady is the keel of that ship.

He is the locker room sheriff, the greeter, the keeper of all that Belichick values. This allows Belichick to go after talented and troubled players that no one else could handle and make them successful as a Patriot. Without Brady, this approach simply doesn’t work.

The most important aspect of the Brady-Belichick relationship, however, is Brady’s willingness to be his player. Brady understands that he will never be more important than the Patriot principles. He often says Belichick is the coach and relegates his role to carrying out the mission as a soldier. This is a model for all to follow, including Allen.

No quarterback or player deserves preferential treatment. In fact, the more success a quarterback has, the more he needs to demonstrate to the team that he is just like them, a soldier carrying out the mission each week. This is how greatness is cultivated in a locker room. These respectful players tow the line, they work and perform with a toughness and selfless grit they take pride in. No one player is reaching for personal glory, they are all doing their job to the very best of their ability.

The evidence suggests that Allen possesses the size, athletic ability and leadership presence necessary to begin the process of becoming a championship-level player. He is fiery, charismatic and physically gifted. 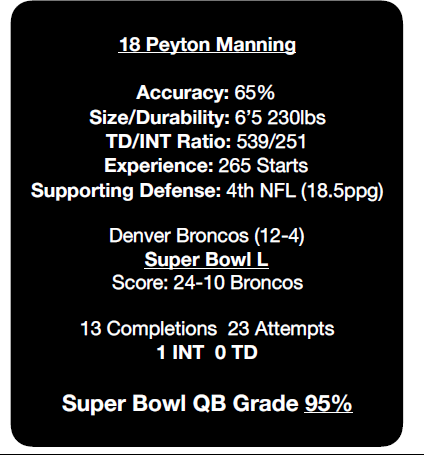 The questions that will define Allen’s future revolve around how he will develop himself this offseason and in the years to come.

Will he be the captain that attracts skill players to stay in Buffalo and work tirelessly to improve for next year? Will he bring the team together in ways that Brady and Manning do? Will he work closely with Daboll each day, educating himself on what it takes to be great? Will he make Buffalo a destination for free agents, attracting talent to the Bills’ organization?

His drive for greatness will define how much improvement he makes. His study and preparedness will be the engine of his success. Is he willing to sacrifice and work like never before to achieve the improvements that can take the Bills back to the Super Bowl?

Allen can develop himself into a better passer, perhaps to the tune of 61 percent. To do so, he will need to improve his footwork and timing, refine his feet and lower body, and dedicate himself to the practice of his mechanics. He needs to saturate himself into the game, preparing for all of the situations the future may hold. He must commit himself to improving his accuracy, his touchdown-to-interception ratio, his preparedness, his command of the system and his leadership to achieve greatness the way elite players like Manning, Brady and Foles have.