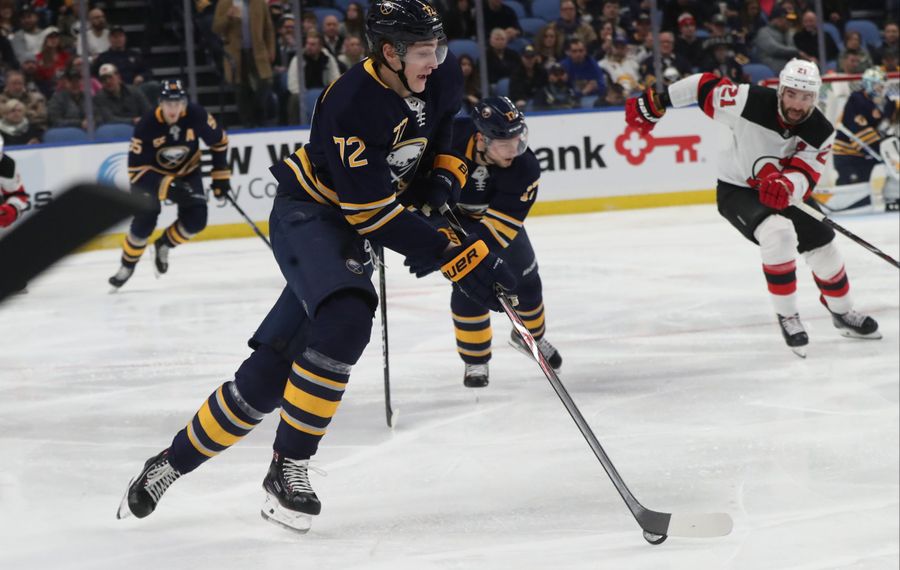 The crowd's roar began with under a minute remaining in the second period and did not quiet until the Buffalo Sabres left the ice for intermission Tuesday night in KeyBank Center.

Following an angst-filled month of inconsistent hockey, the Sabres had just erupted for five goals in the second period despite playing without Jack Eichel for a third consecutive game.

They didn't slow down in the third period, either, and held on for a 5-1 win over the New Jersey Devils to keep pace in the Atlantic Division.

It was the Sabres' first five-goal period since they had five in the third of a 5-1 win over Carolina in Nov. 28, 2009. With the victory, the Sabres improved to 23-14-6 with 52 points and are two wins away from matching last season's total.

Five different players scored — including defensemen Lawrence Pilut and Jake McCabe — and 14 different players recorded one point in the second period. Carter Hutton made 20 saves, and Buffalo finished with 33 shots on goal.

Jeff Skinner's 29th goal of the season tied the score early in the second period. C.J. Smith and Casey Mittelstadt also scored for Buffalo. Blake Coleman had the only goal for New Jersey, which led 1-0 after the first period and fell to 16-19-7 with the loss.

Opening salvo: The Devils took a 1-0 lead 1:28 into the first period when Miles Wood passed to the front of the net, where Coleman directed the puck past Hutton.

Opening statement: Aside from the one-goal deficit, the Sabres played an outstanding first period. They outshot the Devils, 11-4, had 13 more shot attempts and won 16 of 23 faceoffs.

A breakthrough: The Sabres scored five second-period goals on 15 shots, including their second shorthanded goal of the season.

Milestones: Smith and Pilut each scored their first career NHL goals in the second period. Smith, playing in his fourth game since being recalled from Rochester, scored 4:14 into the period when his shot snuck below Keith Kinkaid's right arm and barely crossed the goal line. Pilut's wrist shot from the right point made it 5-1.

It was the sixth time in franchise history that two Sabres recorded their first NHL goals in the same game.

30-goal plateau: Skinner scored from below the left faceoff dot when his wrist shot went off the crossbar and in at 1:29 into the second period. Skinner is one goal away from becoming the Sabres' first 30-goal scorer since Jason Pominville in 2011-12.

Growing pains: Mittelstadt's sixth goal of the season and his second in 20 games made it 3-1 at 10:42 into the second period when he skated around Devils defenseman Damon Severson and poked his own rebound past Kinkaid.

Penalty kill: The Sabres' penalty kill improved to 41-for-45 over the past 16 games by not allowing a power-play goal against the Devils.

Changes: In a surprising move, coach Phil Housley moved Reinhart to the second line with Rodrigues and Conor Sheary. Skinner remained on the top line, skating with Vladimir Sobotka and Tage Thompson.

Also, Rasmus Dahlin, a left-handed defenseman, was moved back to the left side and paired with Zach Bogosian.

Streak continues: Eichel and Reinhart have not missed the same regular-season game since Eichel was drafted second overall by the Sabres in 2015.

Next: The Sabres are scheduled to return to practice Wednesday in preparation for a Friday night game in Raleigh, N.C., against the Carolina Hurricanes.