They might be the most popular Mexican meal of the moment, but I submit that taco myopia blinds us to the pleasures of the rest of the Mexican table.

Stopping at tacos is like finishing your first hamburger and deciding that’s all the American food you want to try.

Here’s 10 Mexican family restaurants where you can find classic Mexican dishes I’d recommend to broaden your horizons. Burritos are fatter, quesadillas flatter, but there’s so much more to explore beyond the tortilla’s edge:

Moles are complex sauces, used for simmering, stewing, and finishing other ingredients. Reflecting Mexico’s regional diversity, they can vary widely in finished color and ingredients, though nearly all include chiles, fruits, and spices. This Medina restaurant features two moles I haven’t seen elsewhere in the area, among a full array of more common dishes.

Coloradito is a thick brick-red gravy whose flavor shifts like a kaleidoscope on the tongue, from sweetness to aromatic spice, as it meets your palate. Negro is inky black, with raisin overtones and subtle bitterness than makes it especially good with pork.

[Related: Take a road trip to Medina for tacos]

This is my favorite place for mole poblano, the brown sauce of famous complexity – over 32 ingredients, the menu says. After three or four types of dried chiles, spices like nutmeg and cinnamon, nuts for texture, and the soulful sweetness of dried fruit, chocolate comes to the party as well.

Take a bite and its heady, intoxicating flavor unfolds like origami coming undone. It can be applied to chicken, or enchiladas, but I’d go with the carnitas, braised pork. The mole is my main reason for returning to a sometimes shambolic dining room. 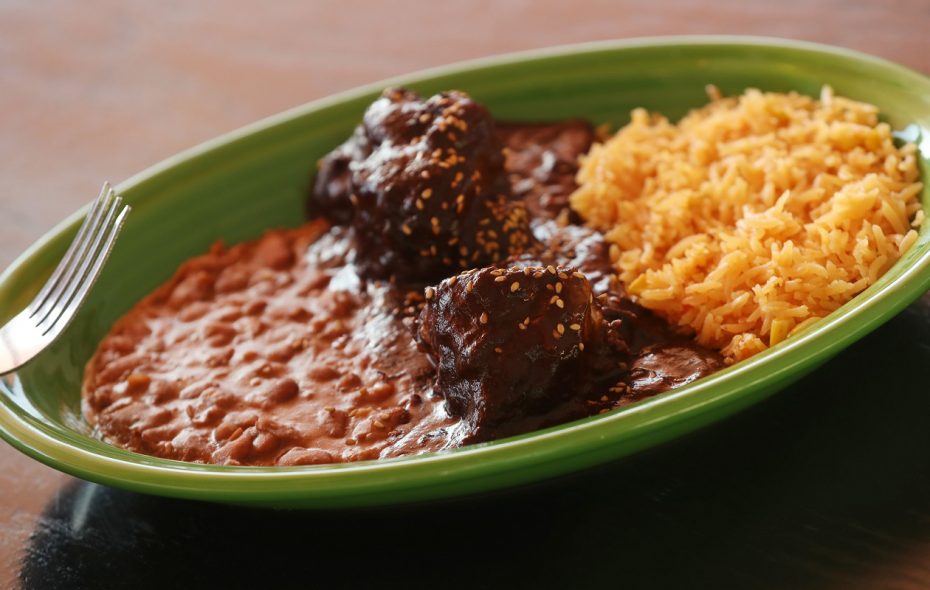 [Related: Steamed that Buffalo's tacos aren't on this list? They're on this one]

Picking one non-taco dish to spotlight at my favorite Mexican family restaurant was tough. Torta sandwiches, hearty plates like potatoes fried with chorizo sausage, choriqueso, and carne asada fries all deserve recognition. Los Cuates gives diners a chance to try two pinnacles of achievement on one dish – the restaurant’s rojo and verde sauces, over a pair of burritos.

Simpler than moles, these sauces are swoonful samples of essential Mexican cookery. Rojo, red, brings resonant multi-chile flavor with garlic and a wisp of campfire heat from smoky chipotles. Verde, green, is a vibrant cocktail of tomatillo, green chile, cilantro, and onion. 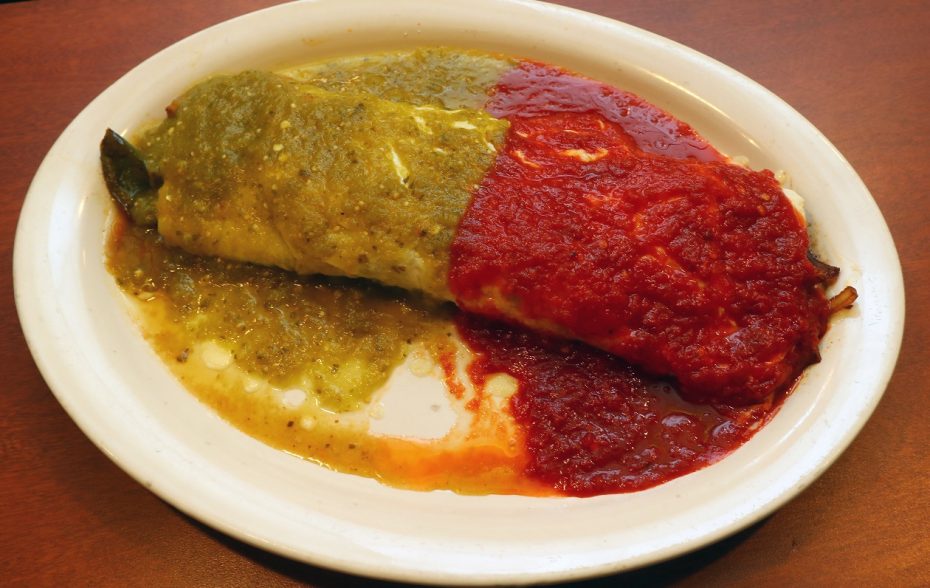 Judging from a sampling of local chiles poblanos renditions, stuffing a whole (peeled, deseeded, roasted) pepper with cheese, dipping it in eggy batter and panfrying the parcel until golden brown is harder than it looks. This place gets it right, offering a pair of what taste like freshly roasted peppers with every plate. The coating is more of a scrambled egg jacket than my favorite versions, which offer more of a poofy quilted down coat, but it’s the closest I could find. Green poblano heat refracts through a pool of salsa verde lively with lime juice.

Mexicans invented tequila. Fortunately, they also invented posole, the hominy-and-pork soup with chile broth with restorative powers powerful enough to draw imbibers from their deathbeds. It has tender chunks of pig and braised corn kernels to soak up the toxins. Fresh lime juice, shaved cabbage, cilantro, and diced onions to replace lost vitamins. All in broth with a gently insistent piquancy, nowhere near the heat a Buffalonian might expect, since it’s the glowing orange-red of uncut Frank’s Red Hot.

A tamal is a larger version of the tamale, with one enough for a small dish. Here, the steamed corn dough comes out fluffy instead of reminding me of wet cement. Its fillings and accoutrements change with the seasons. A summer version was stuffed with chihuahua, requeson, and cotija cheeses, served on a green charred chile sauce with corn kernels and marinated onions.

This week it was a seafood version, stuffed and topped with achiote-paste-marinated crab and shrimp, topped with chicharron, scallion, cilantro, marinated onion, avocado puree, and housemade crema. 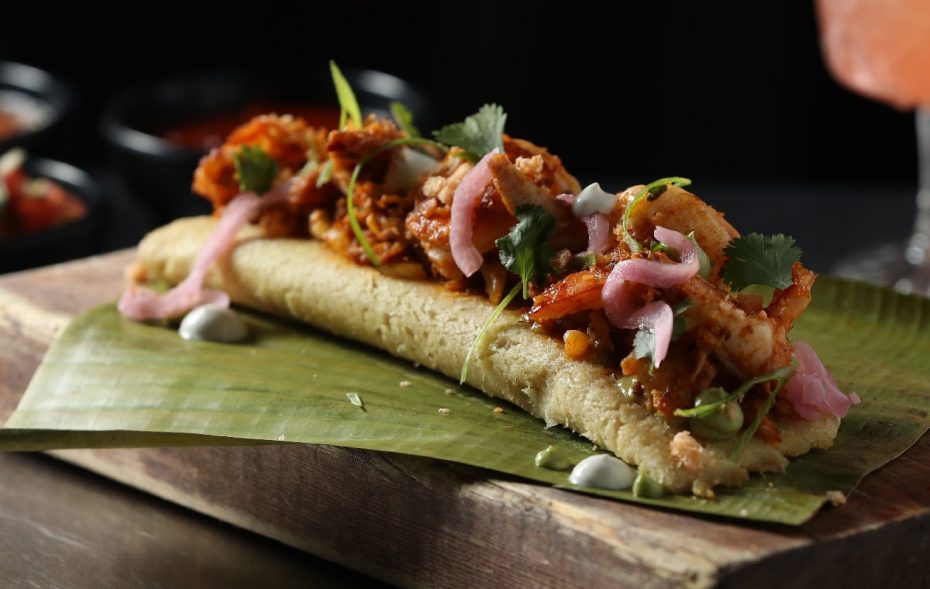 A molcajete is a mortar, without a pestle, filled with an array of proteins and presented as a multi-person entrée. What makes La Tolteca’s remarkable is what’s underneath: verde or rojo sauce. The latter is a chunky creamy tomato concoction subtly fired with chiles including chipotle, smoked jalapeno.

Atop it rides steak, chicken, roasted red sweet peppers and poblanos, chorizo sausage, and batons of cheese softened in the heat of the cauldron. Packed into the provided tortillas with proffered rice, and beans, it’s an experience for two or a table to share. 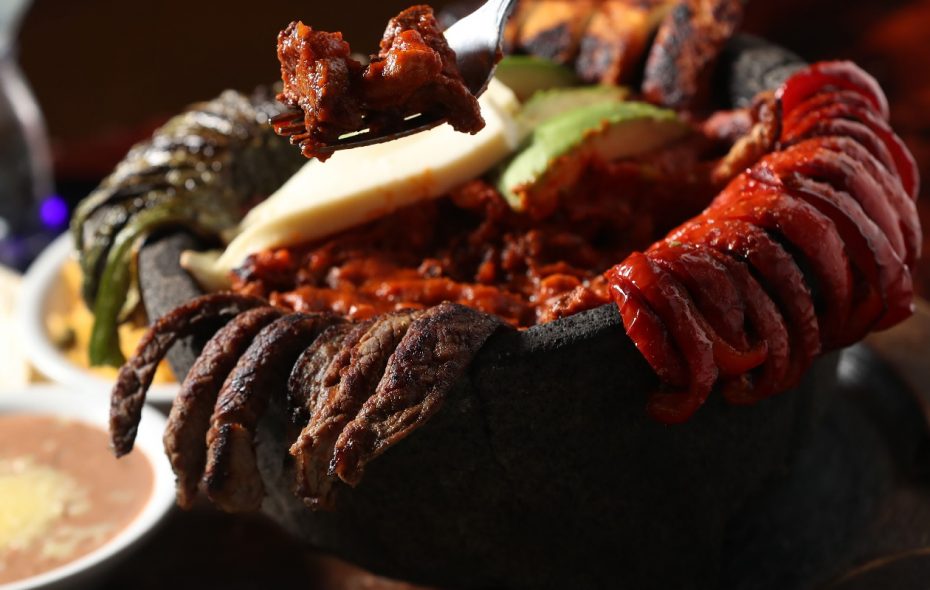 Carnitas is more than pork shoulder braised until it falls apart. The braising liquid is ideally its own fat, producing confit-like silkiness in the shredded pig. The treatment brings a musky, savory sweetness out of the pork, heightened further when carnitas are browned on a hot griddle. Here, it comes in a heady tomatillo-centered verde sauce that mingles with the pork’s juices, making a fine reason to reach for the oft-spurned rice plate for soaking-up duties.

Most of the shrimp I’ve received in local Mexican establishments have been vulcanized to the texture of a pencil eraser. The crustaceans in camarones al chipotle at this restaurant’s two locations came out tender and plump. Better yet, they swam in a cream sauce rich and clingy enough to practically be queso, sneaky-spicy with chipotle peppers, with a couple of whole chiles mixed in, soft as poached prunes, as smoky exclamation points. 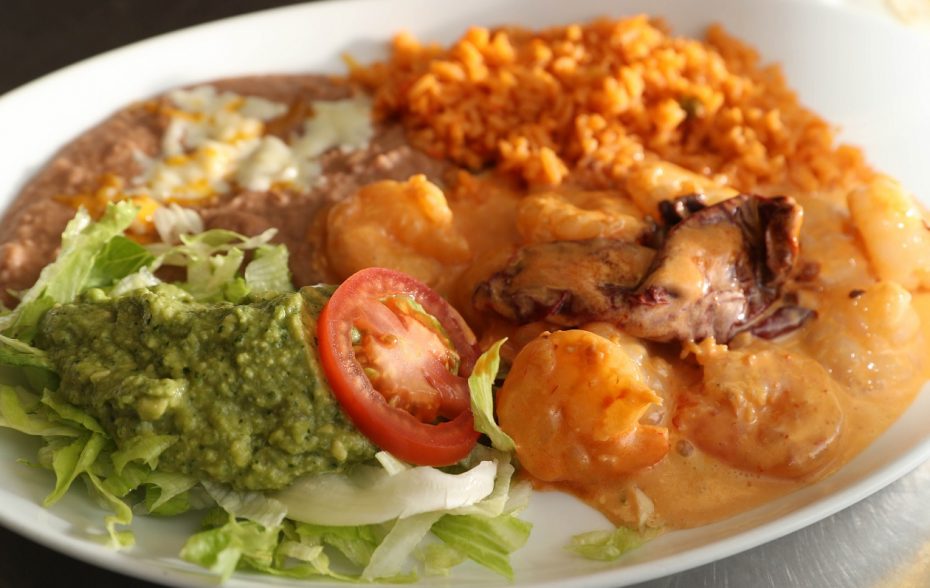 Menudo is posole’s rakish cousin. It’s another sea of brick-red chile broth with a hangover-banishing reputation, this time hiding an offal surprise. Tripe is the main ingredient, stewed low and long so it’s practically pasta tender.

The traditional accompaniments of diced fresh onion and cilantro, plus plenty of fresh lime, might seem far-out for breakfast, as is the Mexican New Year tradition, but if you’re waking at noon, it makes more sense.