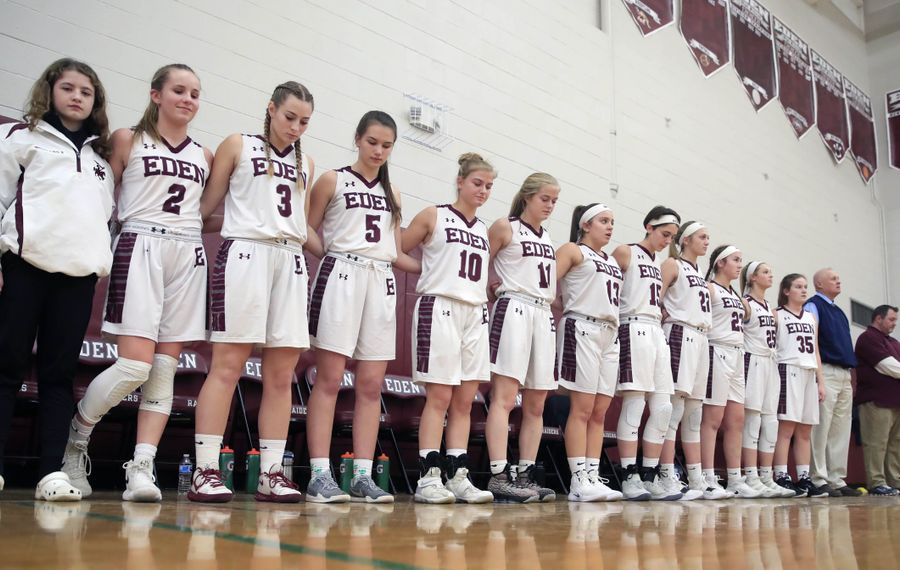 Monday night’s girls basketball game between Springville and Eden on the Raiders’ home court was more than a battle for first place in ECIC IV girls basketball. The occasion was bigger than that.

The Raiders dedicated the game in the memory of Eden Schools counselor Amy Banks, who died unexpectedly on Dec. 27 at age 47. Her husband, Ron, and three sons, Troy, Brody and Cael, were at the game.

Eden director of athletics Marisa Fallacaro Dougherty led a brief ceremony before the game that paid tribute to Mrs. Banks.

Students and other spectators made it a "white-out" game and donations of more than $1,500 were collected at the gate to help fund a scholarship for seniors in Mrs. Banks’ name.

The host Raiders took charge in the third quarter and went on to a 42-32 to win the showdown between the last two teams with unbeaten records in the division. Sophomore Brooke Woodard led Eden with 17 points. She also had six rebounds, four assists and seven steals.

"The girls were a little nervous at first, but they settled down," said Eden coach Joe Dougherty.

Mount Mercy came from six points down to start the fourth quarter, outscored Sacred Heart, 24-13, in the final period and upset the Sharks, 55-50, in Amherst on Monday night in their Monsignor Martin Athletic Association girls basketball game.

The Magic had to overcome a 25-point performance by Sacred Heart star Siobhan Ryan. They did it with a balanced attack led by Alesia Hamm, who had 15 points and Josslyn Strang, who had 10. Tierney Ashe, Hannah Fredo and Angelina Pacholczak had nine points each.

Frontier is looking more and more like a team to beat in ECIC I girls basketball. Led by Kennedy Izzo’s 17 points and 15 by Claire Krusza the Falcons defeated visiting Orchard Park, 48-29, Monday night to go to 4-0 in division play.

Frontier is the only undefeated team in the division.

Jersey Phillips, a junior from Depew, scored a natural hat trick and added an assist for Lancaster/Iroquois/Depew in a 4-1 victory over Monsignor Martin in their WNY Girls Varsity Ice Hockey Federation game at Holiday Rink.