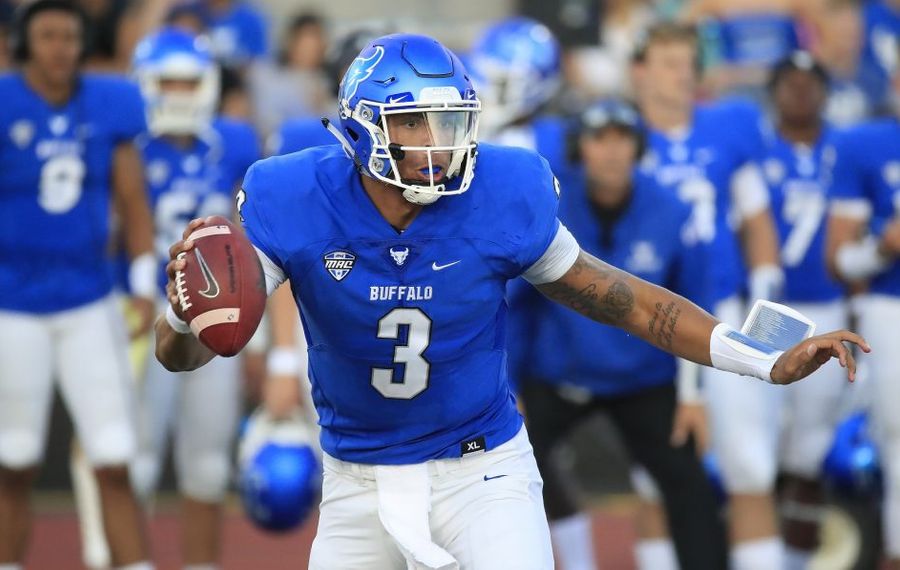 Tyree Jackson will prepare for a career in the NFL.

The University at Buffalo quarterback announced Sunday that he will forgo his final year of college eligibility and will enter the NFL draft.

"Since I was 5 years old, it has always been a lifelong dream of mine to play in the NFL," Jackson wrote in a post on his Instagram account. "This is a once in a lifetime opportunity, and I plan on embracing the challenge."

Jackson earned his undergraduate degree in social science/interdisciplinary studies in December, and entered the NCAA's transfer portal after the Bulls lost 42-32 to Troy in the Dollar General Bowl on Dec. 22 in Mobile, Ala.

“Tyree and I have communicated throughout the process," UB coach Lance Leipold said in a statement released Sunday afternoon. "As I previously stated, we support Tyree and always want what is best for him. Though we are disappointed he will not return for his fifth season in our program, we are proud of Tyree for earning his degree and happy and excited for him and his family as he enters this next chapter! He will always be a Bull.”

Jackson was not among ESPN.com’s Dec. 27 list of top draft-eligible quarterbacks – a class that will include West Virginia’s Will Grier and Penn State’s Trace McSorley – but the Draft Wire projected Jackson as the No. 76 pick to the Washington Redskins in its Jan. 1, four-round mock draft.

"Jackson caught my eye last summer as I was prepping for the 2018 season, and I immediately noticed how many parallels he had with (Wyoming/Bills quarterback) Josh Allen," Luke Easterling, from Draftwire.com, told The News. "Huge frame, rare athleticism for a player that size, and an absolute bazooka for a right arm. He's also got some of the same concerns, in terms of accuracy and consistency. I see Jackson as a raw but talented passer with some rare tools. Those same tools gave Allen enough upside to warrant the Bills trading up to land him in the top 10. I wouldn't be shocked to see Jackson become a hot name leading up to the draft as he shows off those skills throughout the workout process."

Jon Ledyard, a senior NFL draft analyst for the Draft Network, projects Jackson as a fourth- to sixth-round draft pick, but he doesn’t see Jackson becoming an NFL starter as a rookie in 2019.

“I don’t think any NFL team is going to draft him with the intention to start,” Ledyard said. “But if he can’t develop more at the college level, and he felt there were no spots that could develop him to that degree, it was the best move for him to go into the NFL Draft and develop there.”

Yet a delay in his decision as to whether to transfer to another school or to declare for the NFL draft also impacted Jackson’s availability for the East-West Shrine Game on Jan. 19 in St. Petersburg, Fla., and Reese’s Senior Bowl on Jan. 26 in Mobile and the Shrine Game, Ledyard said.

Jackson has not been selected for either game, considered a showcase for NFL hopefuls, including UB wide receiver Anthony Johnson and UB linebacker Khalil Hodge. Johnson will play in the Senior Bowl and Hodge will play in the Shrine Game.

“But if there’s an injury or someone backs out, he could get called into that and it could be a huge opportunity,” Ledyard said. "He could have the most to gain from something like that. But if that doesn’t happen, he’ll have to wait to throw at the combine. And that’s tough, because it’s such a controlled setting. But if he gets an invite and can do something at the Senior Bowl or Shrine Game, he could be a late-third round pick.”

The NFL Scouting Combine is scheduled for March 1-4 in Indianapolis. Invites for the 2018 NFL combine were announced Feb. 6, and 336 players were invited.

What benefits Jackson as an NFL prospect, Ledyard said, are the tools he has: his arm, his athleticism, his mobility and his strength in the pocket. But what he will have to improve on, in order to be NFL-ready, are his mechanics, his consistency and the decisions he makes in the pocket.

“It’s hard to achieve consistency without reps, and that’s where the college game could have benefited him,” Ledyard said.

Jackson’s departure leaves the Bulls with three quarterbacks in 2019 who have a combined 34 completions and two touchdowns in college: Kyle Vantrease, Dominic Johnson and West Seneca West graduate Matt Myers.

Johnson was 1-for-2 passing for four yards and was intercepted once in four games in 2018.

Trevor Bycznski, a 6-foot-5 pro-style quarterback from the Cleveland suburbs, will be a true freshman this fall.

“I wish (Tyree) the best of luck,” Bycznski told The News in a text message. “But with the news of him leaving, I have to work hard, either to start or to battle for the starting position.”