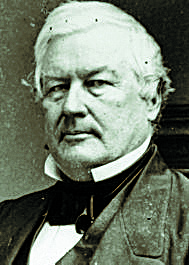 The 219th anniversary of the birth of Millard Fillmore, the 13th president of the United States and the University at Buffalo's first chancellor, will be celebrated at 10 a.m. Monday in Forest Lawn Cemetery, according to UB officials.

The ceremony will take place at Fillmore's gravesite, and open with brief remarks and a prayer by the Rev. Joan Montagnes of the United Universalist Church. It also will feature a presentation of wreaths by representatives of the White House, various Millard Fillmore legacy organizations that Fillmore helped found and the Forest Lawn Group.

According to a statement by the university, it recognizes that "Fillmore played a complex role in the history of slavery in the U.S., which includes the Compromise of 1850 and the Fugitive Slave Act." That role, the statement continues, will be acknowledged publicly during the annual commemoration, which is the 54th consecutive event of its kind organized by UB.