When Phil Simms thinks of Buffalo and its all-consuming relationship with the Bills, he isn’t reminded of a typical NFL market.

“Playing there is more like a college atmosphere,” said Simms, who spent 15 seasons quarterbacking the New York Giants and has had a lengthy career as a football analyst, mostly with CBS Sports. “In other words, everybody is just so, so passionate about the team, and it’s just like when you go to a college campus.”

Simms, who will be part of CBS’ studio show at Super Bowl LIII in Atlanta on Feb. 3, admits he has a great affinity for the Bills as well. The MVP of Super Bowl XXI, when the Giants beat the Denver Broncos, likes what coach Sean McDermott and General Manager Brandon Beane have been putting together, especially with the addition of quarterback Josh Allen.

Simms, who has two sons who played quarterback in the NFL and who tutors young players at the position, offered some of the strongest support of Allen before and after the Bills made him the seventh overall pick of April’s draft.

In the latest “One-on-One Coverage,” Simms spent some time on the phone with The Buffalo News talking about Allen and the rest of the Quarterback Class of 2018, his general thoughts on the Bills, and Simms’ own playing career.

Buffalo News: What was your overall assessment of the performances of the five rookie quarterbacks selected in the first round?

Phil Simms: Well, overall it was a tremendous success. Tremendous. Better than anybody could have ever thought. I thought, “OK, every one of them will take big lumps and it'll be rough as heck.” And it was better than that.

Baker Mayfield had the best (season), playing with the Browns with the best supporting cast. He walked into an offense that was really tailored for him. There were other reasons for his great success: a really good offensive line, weapons to throw, a tight end (David Njoku) that blossomed, a running back (Nick Chubb) they drafted who ends up being even better than I thought. I mean, he was borderline great. So Baker had the best environment to succeed in.

But besides that, I think his presence and his physical ability — which I really didn’t like coming out the draft — was much better than I expected. I'm not sure I wasn't more impressed with the way he threw the ball in Cleveland than he did at Oklahoma. At Oklahoma, there's 30 college quarterbacks that might have done what he did, but there weren't going to be 30 that came into the NFL and play the way he did. It was really, really impressive.

BN: You’ve always said that teams should not be afraid to play a rookie quarterback out of fear that if he struggles badly, it could hurt his confidence. So you must be especially pleased to have seen all five of those rookies starting?

PS: Yes, yes. Did I think all five would? I knew Baker would, of course. It was just what week would it be? I knew Josh Allen would, too. I didn't think it would be Week One, but I knew he would get on the field fairly quick. We knew right away, too, about (the New York Jets') Sam Darnold.

With (Arizona's) Josh Rosen, I wasn't completely sure he would get on the field, but the Cardinals were so bad they had no choice but to put him out there. And he worked under, by far, the worst conditions of all of them. I know it wasn't great for Josh Allen up in Buffalo, but I watched Josh Rosen almost every throw this year and it was rough. The pressure he was under, the system he was in, you name it. He got hit so much and it was so hard for him to play, it's just hard to really show who you are. But I take all that away and look at it and I go, “OK, I see what type of quarterback he is and they're going to have to build around that.” There's no question he is a very, very consistent thrower of the ball. His arm, I’m not going to say it's NFL great, but it's NFL way above average.

I wish he was a step quicker, but he did move around quite a bit for a guy that didn't move at UCLA. A lot of it was out of necessity, but he also just has a great feel and said, “Hey, man, you're not open, let me just move to the right here and see if somebody else gets open. Because in the NFL, these guys are smart that are running routes for me; they'll adjust and get open.”

Jay Skurski's Bills Mailbag: Who should be the top target in free agency?

BN: Who, of these rookie QBs, do you think will make the biggest jump from Year One to Year Two?

PS: The biggest, I think, would come from Josh Allen and (Baltimore's) Lamar Jackson. For Josh Allen, maybe in decision-making and (recognizing that) sometimes it's OK to hit a three wood off the tee instead of hitting a driver every time. He didn't see a window that he didn’t think he could get the football through. I think he'll learn that. That's going to come, I have no doubt about that.

With Lamar Jackson, I already see little things that are improving in his throwing, so he's learning and if he really is just handled the right way during the offseason, I think we should see a tremendous difference in him as a quarterback next year. I thought he was not the same guy early, like in preseason, that I saw in college. I think he gained weight, trying to put muscle on, and I thought that was wrong. Be who you are. You’re a muscular, thin guy, and that’s what works. Putting extra muscle on, all it does is slow you down. And I think, as he's played, he’s gotten quicker. But his throwing is where he's going to make the biggest jump. He's going to be the most interesting one of all to watch during the offseason.

BN: How much do you think Allen benefited from sitting out four games with a sprained elbow?

PS: The energy that you spend, mentally and physically, in the early part of your rookie year is extraordinary. And I thought Josh Allen and Sam Donald really benefited from getting nicked and missing a few weeks because they came back refreshed, renewed and I just thought they looked better. And each team, of course, had a little more chance to develop. It was very evident with both.

I didn't know Sam Darnold was hurt (when he actually was dealing with a foot injury suffered in Week 9), and I said on CBS to Boomer Esiason, “You know what? He needs time off. He needs a week or two where he doesn’t even study the game plan. Just rest.” Because that first year is just a brutal, grueling year for rookie quarterbacks more now than ever. 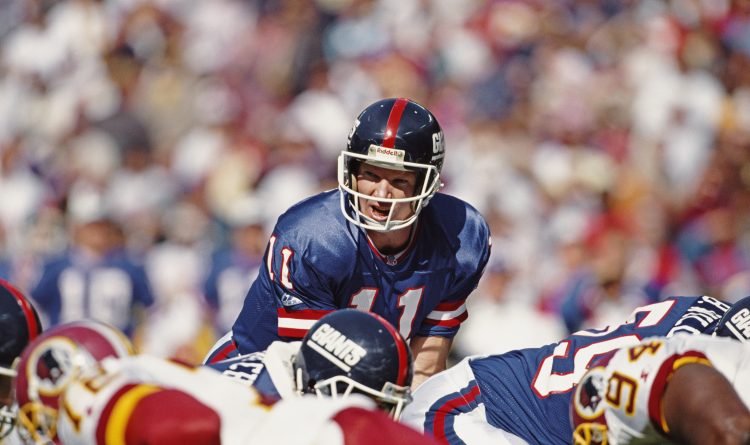 Phil Simms in action with the New York Giants in 1993. (Getty Images)

When I was coming out of college (in 1979), I didn’t have to go through 20 interviews. I did do about 20 workouts, though, but those were fun. It wasn't like the TV crew (from NFL Network or ESPN) was there at Morehead State, (with analysts saying), “Oh, he threw the ball in his workout and was 42 of 44,” and all that bull crap. The workouts I did were fun. All my receivers came out, we were on the field just throwing it around. I just said, “Hey, what do you want to see, Coach?”

But now it’s all so scrutinized. We’ve got 100 quarterback experts out there and it’s all televised. But that’s the world, that’s OK, but that does wear on you. Then, there’s the draft and then all the other stuff that comes with it once you start in the OTAs, training camp. Just the constant attention and pressure are unbelievable.

BN: What’s your sense of where the Bills are headed?

PS: First of all, it was really evident to me, early and quickly, that Sean McDermott was going to be a good head coach. When he was the Carolina Panthers’ D coordinator, we would talk (in production meetings before CBS broadcasts) and he wouldn’t say much. I admired that he wasn't a self-promoter. I’d ask him, “Do you want to be a head coach?” He wouldn’t even answer that. “I’m just gonna do my job here,” he would say.

That's really unique in the NFL. I know a lot of coaches in the league, they have great respect for him. I know some of the people I work with, mainly Bill Cowher, who really appreciates him. I talked about it with Bill almost every week, our appreciation of what we see going on in Buffalo. Now, you could say that maybe, the easy part, they've done. The hard part is coming.

We all talk about 8-8, 9-7 like it's nothing. And I always say to people, “Do you know how hard it is to win games in the NFL?” The Pittsburgh Steelers are a team that truly had a Super Bowl roster, and they didn’t make the playoffs. So what does that tell you about the NFL? It's extremely hard to make it all work and come together and all that, and not let a game or to slip out of your hands where you were the better team and you outplayed the other team, but you lose because of things that are in your control and you let them get out control. That’s how you get fired, that's why you miss chances to win Super Bowls and all that. And that's the hard part: to make sure, when you're the better team that you don't lose those games.

BN: When you were playing quarterback for the Giants, you didn’t show a whole lot of the side that has allowed you to have such a long and successful broadcasting career. How do you explain that?

PS: I wasn't good enough where I could be outspoken. Look, I went to work every day to keep my job and do the best I could and I never took it for granted. And I know there's a fine line between success and failure. I wasn't John Elway or Jim Kelly or Dan Marino, so I had to find a way to make it work for me.