If there's anyone who understands contemporary digital photography, it's a blogger.

Buffalo bloggers and influencers accrued a lot of social media followers, who watch their lives one photo at a time.

An aesthetically pleasing picture takes factors into account what a good photographer achieves nearly subconsciously: rule of thirds, lighting, focus, and importantly, composition. An interesting background does wonders for a photo, whether it's taken on a state-of-the-art camera or an outdated camera phone. Some things are naturally photogenic.

As a part of our "According to Bloggers" series, we've asked local bloggers and Instagrammers where they go to snap photos, as well as a few other questions. Where can you find Buffalo's best brunch? The best place to grab a drink? An activity that doesn't include food and cocktails?

For this edition, we are highlighting the best locations for a photo.

Take a tour of Western New York through a camera lens at some of these spots, whether you share it online or not.

Recommended by: Both Lindsay Robson, blogger at Nickel City Pretty and founder of the Buffalo Blogging Network; and Katharine Phillips, travel blogger and photographer at The Roaming Buffalo.

"Any of the public art pieces around the city. It's so hard to pick just one! It's so amazing to see all of the talented artists creating these beautiful pieces of art on buildings in Buffalo, bringing some life to an otherwise sad and boring brick wall," Robson said.

"Buffalo is home to some fantastic murals scattered throughout the city thanks in part to the Albright-Knox's public art initiative. With a stellar background like that, all you have to do is pick one, point and shoot!" Phillips said.

A drive through any of Buffalo's neighborhoods should take you past a mural, if you're looking. The Albright-Knox Art Gallery's public art initiative began in 2013, when the gallery partnered with Erie County -- the City of Buffalo joined the following year -- to create art in public spaces created by a range of artists, and that included a spectrum of perspectives and collaborative input from the communities. It's resulted in what you'd expect: murals throughout the city that reflect the city's history. Sometimes somber, sometimes playful -- and generally moving. 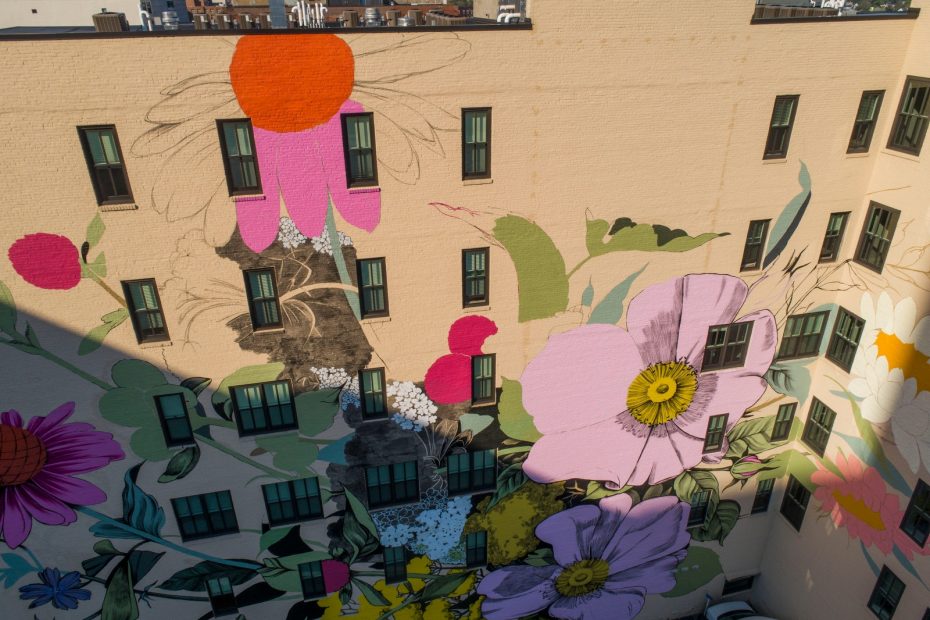 Recommended by: Beau and Lindsay Riggs, bloggers who write about things to do for couples and families at Buffalovebirds.

"It is stunning and perfect for a cool wedding party, family, or selfie shot," the Riggses said.

A few bloggers could nail down their favorite murals. Artist Louise Jones painted a vibrant outburst of wildflowers on the Sinclair Building downtown in September 2018, and it's flooded camera rolls and Instagram feeds ever since.

The News' Harold McNeil described the mural as "gargantuan," as it spans the entire 6 1/2-story building. "It features wildflowers that are specific to New York, and it also features a few flowers that I encountered on my trip here," Jones said.

"This enormous black and white mural by Shantell Martin is a fantastic selfie spot. Try to not get lost trying to find the countless faces throughout," they said.

When Shantell Martin's work was on exhibit at the Albright-Knox, the gallery commissioned her for a piece that will last beyond the few months her installation would be showing. Martin used her signature black-on-white linework to craft a mural on Buffalo's East Side, capturing the community and her own identity within the 200-foot mural.

In 2016, Martin told The News' Colin Dabkowski about community reaction while she drew the mural. "People were stopping by all day, telling me about their stories, telling me about the neighborhood and how they've seen it change. ... There is something about it that feels welcoming and feels accessible, to the point where someone from across the road will walk across and introduce themselves and thank you because they feel like this is for them," Martin said.

Recommended by: Naa Quaye "Nkay," fashion designer at NKM Styling and blogger at The Boss Diary.

"I like the graffiti and street art," Nkay said.

Buffalo's artsy nightlife hub is home to, yes, more murals, as well as photogenic bars and architecture, and neighborhood streets lined with quaint houses. The Old Pink, Buffalo's lovable dive bar, isn't painted the color you might expect. Flamboyant electric green flames crawl up its dark purple sides, which should break up your social media feed of espressos and cat photos nicely.

Allen Street Hardware welcomes dancing patrons inside every weekend, but also features a few immortalized outside in Julian Montague's mural "Secondary Occupants." After you walk past that mural, you'll meet a grab bag of murals, commissioned by the "short-lived" Allen Street Artists Collective, ending with a dialogue line saying, "The work we do is not for the faint of heart," in shaky lettering. 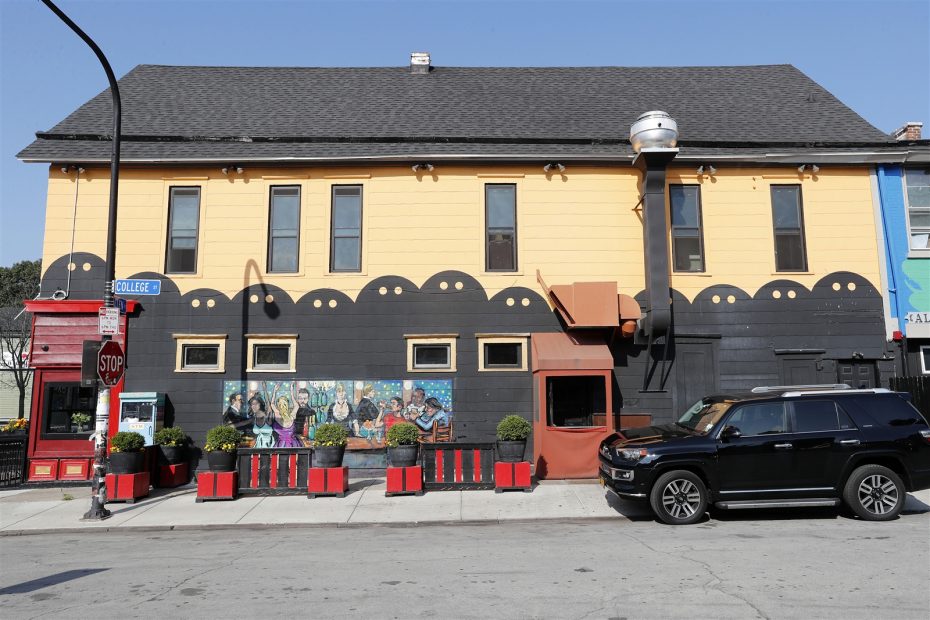 You can see "Secondary Occupants" on the east-facing side of Allen Street Hardware. (Mark Mulville/Buffalo News)

According to bloggers: Where to grab drinks in Buffalo

Recommended by: Scott Robinson and Alix Gilman, bloggers at In a DC Minute and owners of The Shirt Factory in Medina.

"We've been walking along the canal since we were children," Robinson and Gilman said.

Whether you walk along the canal in North Tonawanda, Lockport, Gasport or Medina, the views are fairly constant. In the winter, when the canal is drained, expect a Charles Burchfield-like landscape of barren trees and snowy ice. Once the trees bloom, navigate the Canadian geese along the opaque water with lush forestry as a backdrop. 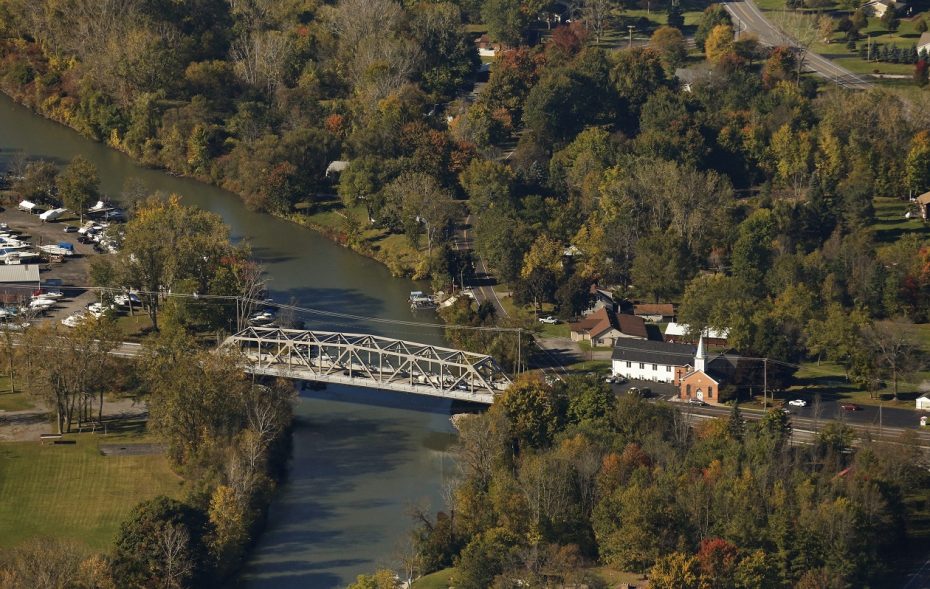 The Campbell Boulevard bridge over the Erie Canal in Pendleton. (Derek Gee/Buffalo News)

Recommended by: Caralyn Mirand Koch, plus model and content creator.

"I will always love the greenery in Delaware Park and the classic marble of Albright-Knox and the History Museum. I feel like you haven't really been to a prom or wedding in Buffalo if you haven't taken pictures around there," Mirand Koch said.

It's true, the Albright-Knox steps see countless amounts of wedding parties and gussied-up teens each year. It seems like no one can resist those Grecian-inspired columns, or sneaking some of Hoyt Lake's rowboats in the background of their love boat photos.

Even if you're not signing a marriage contract or in high school, both museums' architecture -- they're a stone's throw away from each other -- is transformative. 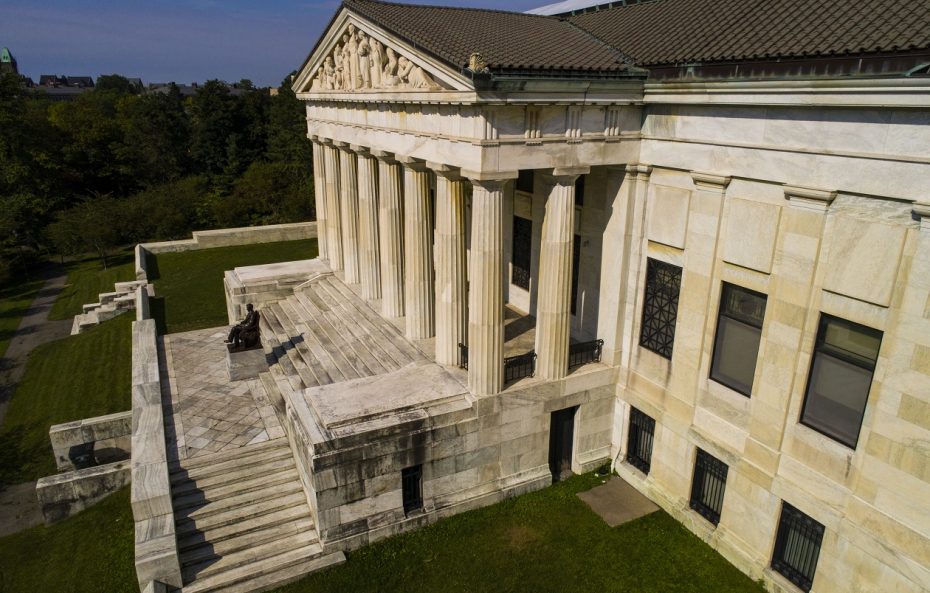 Even if you cannot get this perspective, the Buffalo History Museum is a great spot for a photo. (Derek Gee/Buffalo News)

Recommended by: Nabila Ismail, travel blogger at Dose of Travel.

"Rowhouse has the most beautiful cafe with its marble and gold accents. Then, you can walk upstairs to a beautiful mural and cozy workspace with bookshelves. The natural lighting is also prime!" Ismail said.

If you're walking on the side of the street with the rowhouses, you might notice each tightly knit house boasts intricate architecture that harks back to a bygone era. If you're on the other side of the street, pan out to capture the full link of rowhouses. Then, zoom in to notice one you can enter for a coffee, pastry or meal.

Rowhouse -- the restaurant -- opened in 2017, filling an indoor cafe void Buffalo didn't even know it had. Rowhouse's interior is impressive. It tries hard to place you on European street corners and not inside a building on Delaware Avenue. For a coffee, which is also highly Instagrammable, the restaurant is worth the tour. With an iPhone in hand, of course. 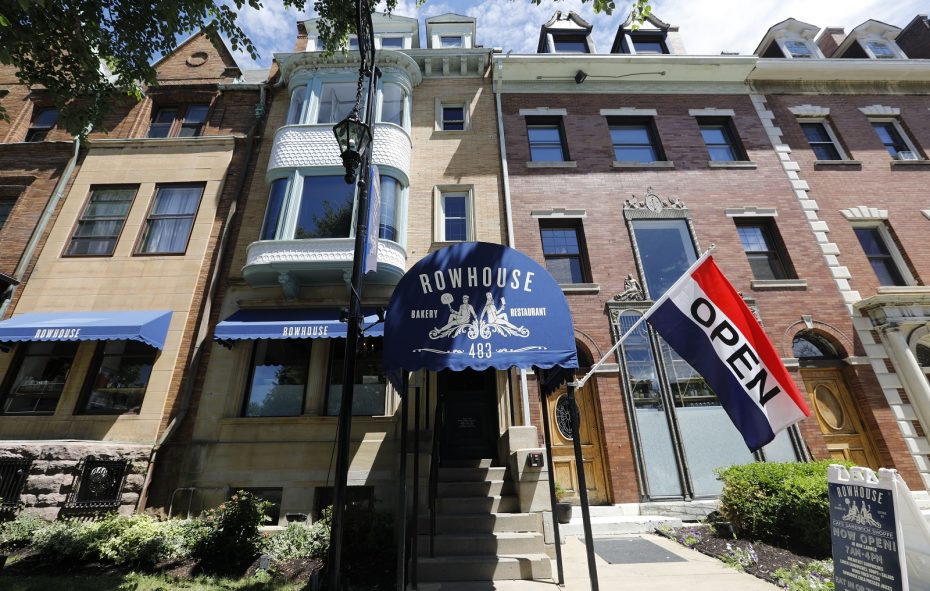 Recommended by: Ismail, from Dose of Travel.

"The sunflower field is an obvious answer -- have you been on Instagram lately?" Ismail said.

It wouldn't -- couldn't -- be a photography location list without the famous sunflowers. For those who grew up on Buffalo's rural outskirts, it might just be another flower field, but even country-dwellers have to admit, these are a lot of sunflowers.

In 2017, Western New York discovered the Danielewicz Farm and its sprawling sunflower field, and it quickly became a not-well-kept secret. If the purpose is to share a photo on social media, it can't stay secret for long.

Perhaps a sunflower photo, or 50, graced your social media feeds. By 2018, the farm had its own Facebook page, Sunflowers of Sanborn, and began hosting events, such as an artisan market, yoga and a food truck rodeo. That is, until they were told to shut down events.

The Town of Cambria ordered the farm to shut down event hosting in September, citing the town's zoning ordinance. It's unclear whether or not you'll be able to catch a sunflower photo next summer, but keep it bookmarked. In case. 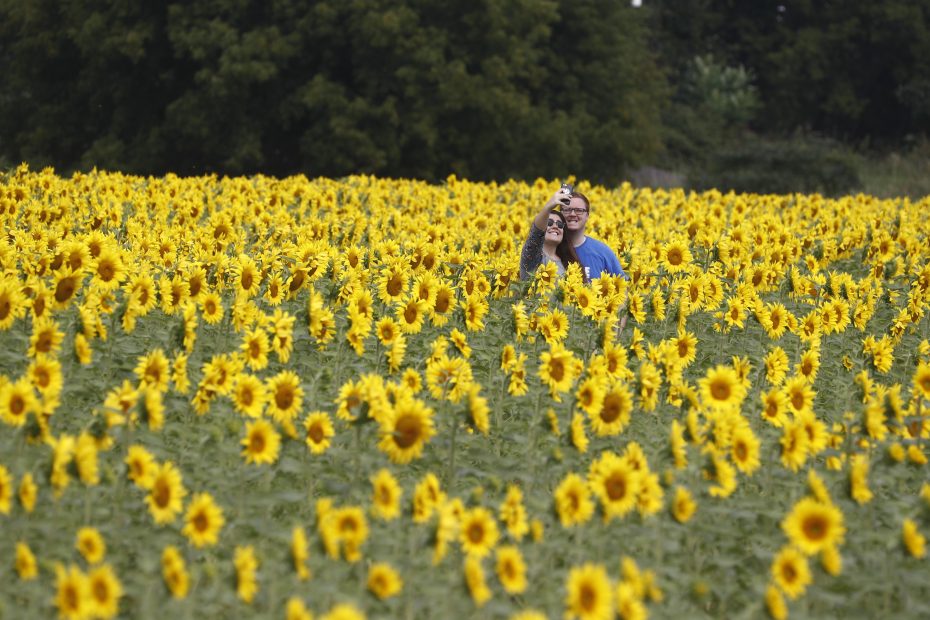 Two people take a selfie in a field of sunflowers at Danielewicz Farm in Sanborn. (John Hickey/Buffalo News)