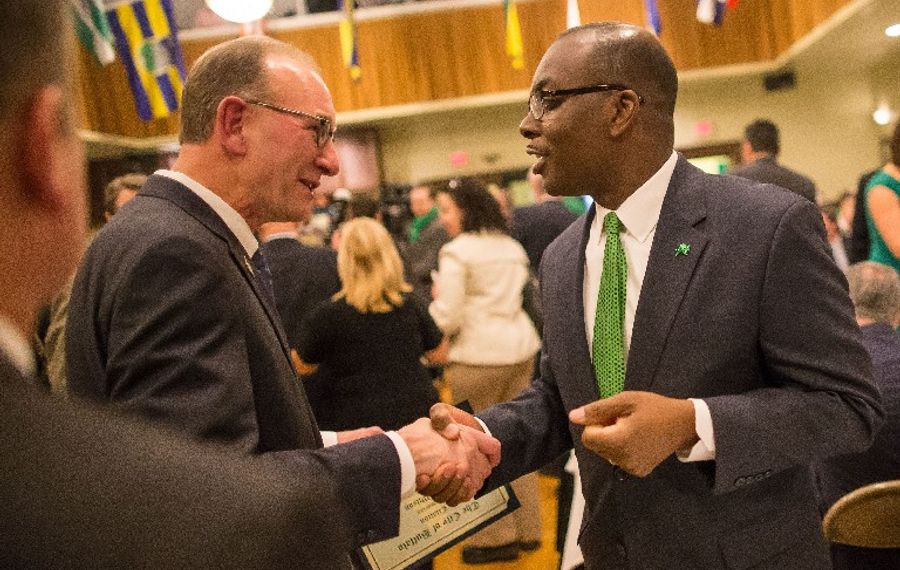 There are worse ways to dispense with a political rival than to arrange a promotion for him. (Ask your favorite umbrella-toting KGB agent.) And we don’t know for sure that Mayor Byron W. Brown pulled any strings with the governor to have his intraparty nemesis, city Comptroller Mark J.F. Schroeder, wind up with an appointment as the state’s next commissioner of the Department of Motor Vehicles. But you do the math.

Brown is the state Democratic Party chairman and a strong ally of Gov. Andrew M. Cuomo. He also has had a contentious professional relationship with Schroeder, who has publicly questioned the mayor on budget matters and ran against him in the Democratic mayoral primary in 2017.

The most straightforward interpretation of Schroeder’s promotion is that the governor thinks he is the best man to manage the department that once was headed by Western New Yorkers Nancy Naples and David Swarts. But it doesn’t really matter how Schroeder got the new job. A political thorn will be removed from Brown’s side, for now.

It will fall to the Common Council to name a replacement to fill out Schroeder’s term, which ends next Dec. 31. And the office is up for election in November, so the city’s voters will eventually have a say. The council would do well to choose a new comptroller who is independent enough to challenge the Brown administration on finances when it needs to be challenged.

Though his public disputes with the mayor were layered with politics – Schroeder unabashedly pointed out what he said were Brown’s shortcomings during the 2017 primary campaign – Schroeder raised some legitimate questions about city budget issues and revenue projections made by City Hall.

A prime example is the anticipation of casino revenue from the Seneca Nation. The administration projected the city receiving $17 million in casino money that the Seneca Nation contends it no longer owes. The Senecas and the state are in arbitration over the payments, but the money has yet to materialize, as Schroeder has pointed out.

Cuomo visited Buffalo the week before Christmas and stated that municipalities should wait for the arbitrator’s decision before counting on casino money.

“Don’t count your chickens before they’re hatched,” the governor said.

Schroeder has clashed with the mayor on auditing the Buffalo Municipal Housing Authority, on how the city pays for emergency demolitions, even on an annual picnic for senior citizens that the mayor sponsors. He has warned about the dangers of the city depleting its reserve funds to meet current fiscal obligations.

Brown expressed his displeasure with Schroeder’s challenges in a meeting in November with Buffalo News editors and reporters. The mayor said the comptroller was motivated by “sour grapes” over losing to Brown in the 2017 primary.

“I am not at war with the comptroller, but he lost,” Brown said. “The election is over. The voters chose me. I’m the person that from 2006 has led the renaissance of the city, not the comptroller, not any other elected official.”

Patrick Curry, a top aide to Schroeder, responded to the mayor’s criticism by saying “the comptroller is going to continue to do his job, whether the mayor likes it or not.” He also accused Brown of recruiting a challenger for Schroeder in the next election.

A challenger won’t be necessary. We can be sure the comptroller named by the Common Council will be a Democrat, and very likely less of an irritant to the mayor than Schroeder was. But their relationship should not be friction-free. Buffalo needs another fiscal watchdog who makes protecting the taxpayers a higher priority than keeping the political waters calm.

As for Schroeder, he proved us wrong in our initial skepticism of his ability to perform professionally in the comptroller’s office. Lesson learned. We fully expect he will succeed in his new assignment and wish him well in it.