Dylan McLaughlin makes it a point to have a brief conference with his Canisius hockey linemates after each shift they skate.

Sometimes it’s about a solid pass that set up a goal, or it’s about a mistake one of the three made. Those aren’t the easiest conversations to have, but they’re among the necessary ones.

“In the games, on the bench, we’re always coming back to the bench and talking about what we could have done or what we saw out there,” said McLaughlin, a center. “They’re both easy to talk to and communicate with. Our relationship is going to keep building and keep getting more chemistry.”

McLaughlin has averaged nearly 1.3 points per game with a rotation of linemates, but he has maintained his rhythm in Canisius’ last three games on a line with Parrottino and Alger.

“It’s easy to key in on Dylan, for other teams, especially when they see he’s put up almost two points per game,” said Alger, who has eight goals and six assists. “I know Dylan’s been happy since we added Tino to our line. It’s easiest when all your linemates work well together, and I know Dylan appreciates having Tino on that line.” 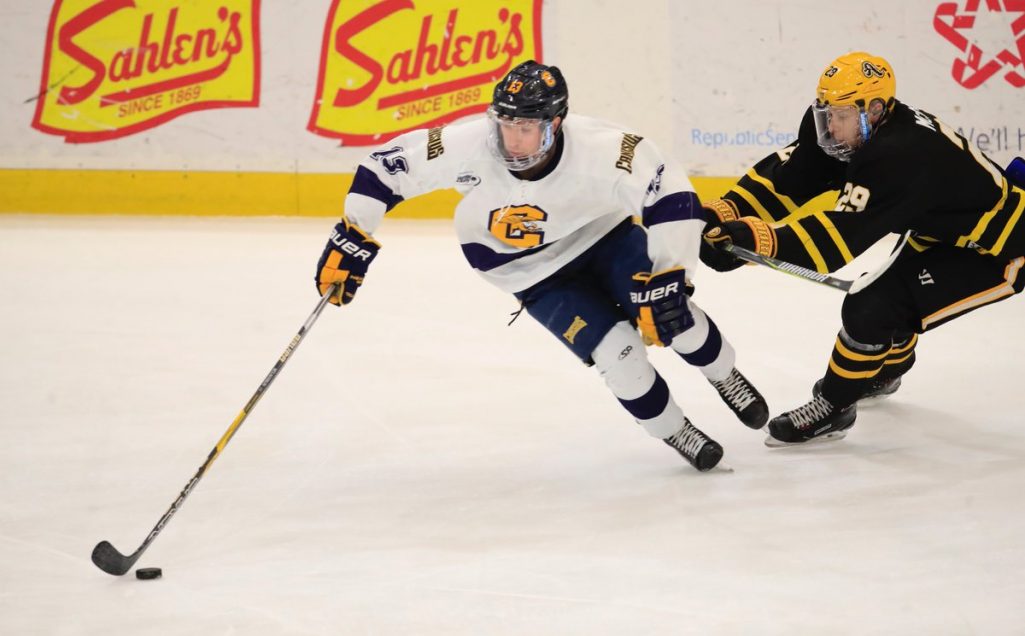 McLaughlin is used to the shuffle. He spent his freshman year at Lancaster High School, then had 26 goals and 72 assists in 221 regular-season and playoff games from 2011 to 2015 with Sioux Falls and Cedar Rapids of the USHL.

Cedar Rapids coach Mark Carlson can’t remember the number of linemates McLaughlin has had, but said what helped McLaughlin was his ability to adapt to the constant shuffle of players on his line.

“With Dylan, it always went back to his skating and his ability to make plays, and he could play with just about anybody because of that,” said Carlson, who has been the coach and general manager of the RoughRiders since 1999. “That was a real positive, those attributes. It’s really important to have that, when you build a team.

“In the USHL, you’re building almost a brand new team almost every year. You might have five-six players back from the previous team. Dylan was with us for three years. We always felt he was the guy who we were going to have on our team because of the skills he had: skating, puck movement, speed, the things that were going to help us win.”

McLaughlin returned to Canisius for his senior year after mulling turning professional after last season, when he was named one of 10 finalists for the Hobey Baker Award, given annually to the top player in Division I hockey.

The NCAA granted Alger, a transfer from Miami (Ohio) and a sophomore, a waiver the day of Canisius’ season opener Oct. 12 at Holy Cross, which cleared him to immediately play. He joined a line with McLaughlin later in the month. 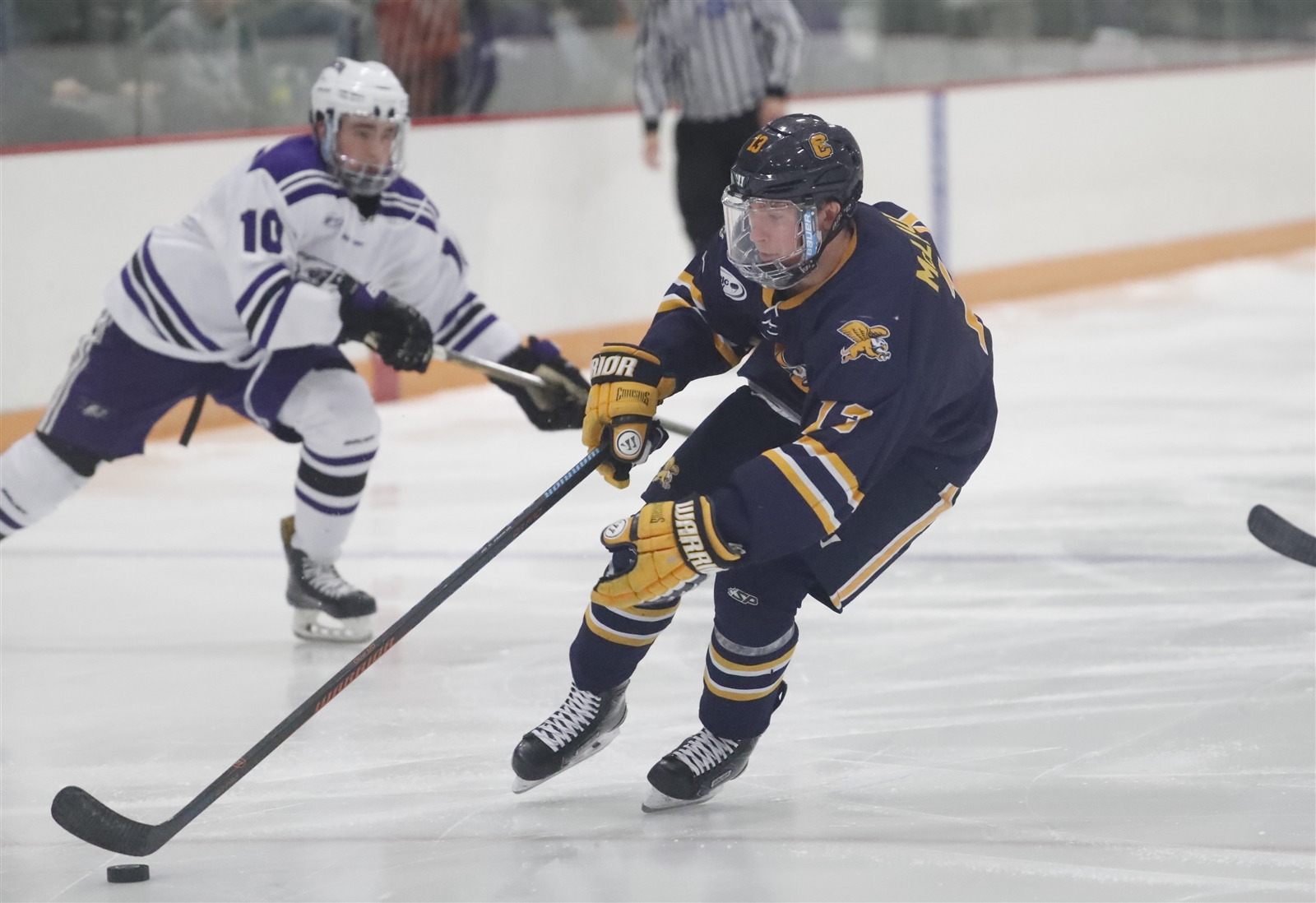 “Before the season, he was one guy who I was like, ‘Alright I think I want to play with him,’ ” McLaughlin said of Alger, who averaged 22 points in three USHL seasons, and scored two goals and had two assists in 18 games last season at Miami. “Just by the way he works out there, and his past, I was pumped to play with him. Now, we’ve got to keep going.”

Canisius coach Trevor Large put Parrottino on a line with Alger and McLaughlin on Dec. 1 against Army. McLaughlin brings skill at center, and drives the pace and speed of the line.

“It’s a pleasant surprise,” Alger said. “I didn’t start (on a line) with him at the beginning of the year. Things were tough and I struggled a bit, but as soon as I started playing with Dyl and Tino, things started clicking and the game got a lot easier.”

Alger brings a polished level of play that helps him as a scorer. He has five goals in his last four games. Alger’s goals are the result of finding space to shoot when McLaughlin, one of Atlantic Hockey’s more crafty players, has the puck.

Parrottino has only two assists and he sat out nine games because of an upper-body injury. But the fifth-year senior brings his smarts to the line. Parrottino tries to outthink Canisius’ opponent and moves to areas of the ice where opposing players may not defend.

“He’s a high IQ player,” Large said. “He’d be the first to tell you he’s not the fastest, but the fact that David’s IQ is so high, and his skill set is so high, it’s a pretty good pair for two guys that can really skate and have high-end skills.” 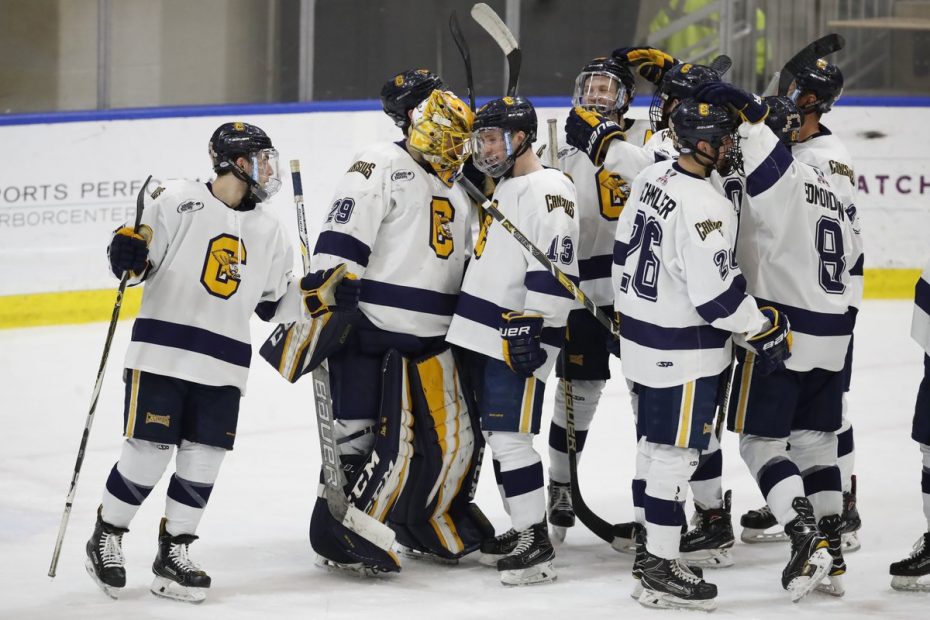 Each excels in a different part of the game – Alger’s strong shot, McLaughlin’s skating and vision and Parrottino’s knack for puck movement – but together, they complement each other, and McLaughlin has set a higher expectation for his linemates.

Injuries can happen. A player can fall into a slump. It’s still too early for Large to project the long-term future of McLaughlin with Alger and Parrottino. But he knows the current benefit of having them on the same line.

“Speed and skill and confidence oozes out of Dylan,” Large said. “But he also can’t do it by himself. It’s really hard to do that, because teams are going to put their best defensive players, their biggest, their strongest and their fastest up against Dylan. He’s seen that and he’s been able to still be who he is.