That sweet scent of mango, coconut or cucumber emanating from high school locker rooms and bathroom stalls around the Buffalo region isn’t perfume or a deodorizer.

That’s the smell of an epidemic — teenage vaping.

U.S. Surgeon General Jerome M. Adams in December declared e-cigarette use among American youth an epidemic, and issued an advisory stressing the importance of protecting children from a lifetime of nicotine addiction and associated health risks.

Erie County lawmakers are just as concerned, and have taken action to clear drugstore shelves of vaping products.

But the front lines in this battle are still inside your local high school — and middle school, for that matter.

“Gone are the days of walking into a bathroom and it smells like cigarette smoke,” said Lisa Krueger, assistant superintendent for curriculum and pupil services in the Orchard Park Central School District. “Instead, they smell like potpourri.”

E-cigarettes or vape pens, known formally as electronic nicotine delivery systems — or ENDS — are non-combustible tobacco products. A liquid containing nicotine and usually a flavor and other ingredients is heated to produce a vapor that is inhaled.

Many smokers use vaping products to help them stop smoking cigarettes, but the use of e-cigarettes by teens is exploding.

• More than 3 million high school students nationwide, nearly 21 percent, use e-cigarettes, according to the 2018 National Youth Tobacco Survey. The survey found vaping among high schoolers increased by 78 percent from 2017 to 2018, and 48 percent among middle school students.

• The most common reasons for using e-cigarettes were their use by a friend or family member, the candy flavors and the belief that vaping is less harmful than cigarettes, according to an analysis of the 2016 tobacco survey by the Centers for Disease Control and the Food and Drug Administration.

• E-cigarettes have been the most popular tobacco product used by youth since 2014, according to the FDA.

“I pretty much see it every day at school,” said Prynces Mantooth, 16, a senior at Lockport High School. “Bathrooms, locker rooms, hallways, classrooms when the teacher’s not looking. You can’t tell what’s perfume or cologne and what’s vape juice.”

“It’s mostly in bathrooms, in locker rooms. It’s taking place on school buses,” said Scott Martzloff, superintendent of the Williamsville Central School District. “I think what you’re seeing is kids at a young age getting addicted to nicotine and need to service their habit.”

At Orchard Park, one student came in with a doctor’s note giving the student permission to vape in school because the youth was trying to get off traditional tobacco. The district said no.

“If they truly have a nicotine addiction, there’s other ways to go about it,” Krueger said. 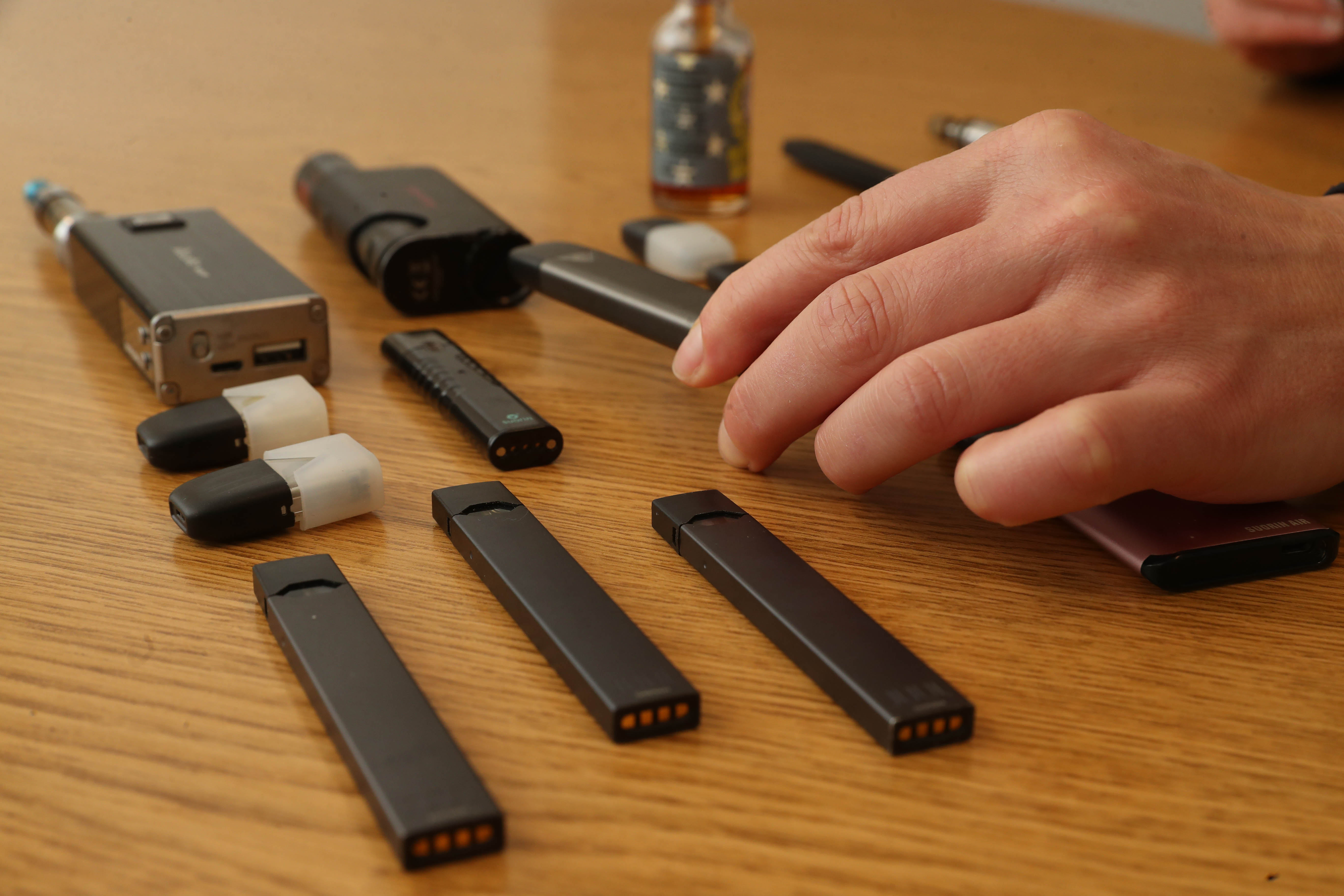 “But nobody thinks kids using a product with nicotine is a good idea,” Hyland said. “They may be safer than cigarettes, but not safe — they still put one at risk.”

In fact, Hyland said, there’s good evidence that suggests the growing use of e-cigarettes among kids will lead more of them to at least try smoking, which is currently at historically low levels.

Even more concerning are the high doses of nicotine kids are inhaling from this relatively new class of e-cigarettes. That includes the wildly popular brand Juul, which has cornered the market.

“They look like a USB drive,” Hyland said. “They’ve got these fruit flavors, they’re sleek, they’re able to be concealed easily. They’re almost like an iPhone for e-cigarettes.”

Young users of Juul and similar vaping devices are absorbing levels of nicotine that nearly match those of traditional cigarettes, according to findings of a study released in September by researchers at Roswell Park.

“Juul is intended for current adult smokers only,” a Juul spokeswoman told The Buffalo News in response to the Roswell study. “We cannot be more emphatic on this point: No minor or non-nicotine user should ever try Juul.”

The long-term effect of vaping is still unknown, but will be part of the research at Roswell Park, which was recently awarded a five-year, $19 million federal grant with the University of Rochester Medical Center to create the nation’s first program dedicated to the study of flavored tobacco.

The Buffalo News reached out to several school districts — including Buffalo, Cheektowaga, Lancaster and Ken-Ton — which either did not respond or acknowledged the issue, but said they treat it the same way as smoking.

But others see vaping as a problem that needs more attention.

“It’s very concerning,” Martzloff said. “It’s a growing issue and it’s an issue that is quite hidden to all of the adults, because students are way ahead in terms of how they hide their Juuls and their vaping.”

In Williamsville, the school district recently made an effort to curb student “Juuling” by increasing the penalty for those vaping or caught with the devices.

In Cheektowaga, the punishment for vaping at Cleveland Hill schools is progressive, anywhere from a warning to a detention to an in-school suspension depending how often the same student is caught vaping, said David Evans, assistant superintendent.

“We definitely see them around,” Evans said. “They’re very small, but you can see the vapor, you can smell them. It has not been a major issue for us, but when we see them we do confiscate them.”

In Orchard Park, High School Principal Jonathan Wolf said the school used to confiscate the vaping devices and allow parents to retrieve them. But now the district disposes of them.

And in West Seneca, Superintendent Matthew Bystrak said most students would not smoke cigarettes.

“The word is out there that cigarettes and alcohol can be bad for you,” Bystrak said.

But, he said, some don’t see the problem with vaping.

“They just think it’s a harmless thing kids are doing and it’s no big deal,” said Anthony Scanzuso, an assistant superintendent in the Williamsville district. “It doesn’t have the stigma of the cigarette and there’s not a whole lot of research on it so they don’t feel it’s doing any harm to them.”

What’s been surprising is that some of the students vaping are those you wouldn't normally expect, said Scanzuso, the former principal at Williamsville East High School.

In the mind of an adolescent, Wolf said, vaping is a rebellious thing to do — the “next thing.”

“Who knows what else is coming?” Wolf said.

E-cigarettes, in fact, used to be big and bulky, and could cost several hundred dollars. Now, they can sell for about $35. They’re also small and look like flash drives — or pens.

Nicotine isn't the only thing that can be vaped. The devices also can be used to vape cannabis.

"It doesn't have the same odor as typical marijuana, but the amount of the THC is so much higher," said Orchard Park DARE Officer Kristin Mazur, referring to the psychoactive compound in marijuana.

In Orchard Park, teachers and administrators have included vaping and e-cigarettes in the health curriculum. But still, it may take some time for the message to get through.

Elsewhere, that education is coming from teens themselves.

Mantooth, the Lockport senior, is a member of Reality Check, the student-led arm of Tobacco-Free Western New York, a tobacco prevention and control program.

She tries to raise awareness of the issue, like her counterparts in Buffalo, Naim Dunbar and Zayne Steele.

“Some people don’t even know what they’re vaping,” said Zayne, 17, a senior at Tapestry Charter School. “It’s crazy. There’s a whole bunch of chemicals in there.”

The FDA is seeking to have flavored vaping juices, other than tobacco, mint and menthol, sold in age-restricted, in-person locations or under heightened practices for age verification for online sales. Juul announced in November that it would pull most of its flavors from retail stores.

In Erie County, selling vaping tools will be prohibited in retailers that house a pharmacy under a law passed by the Legislature last month.

Ultimately, Martzloff thinks there needs to be a wider public service campaign.

“All of us as parents and adults are behind the times as well,” Martzloff said. “We might not even realize the extent that this is going on, therefore the level of concern hasn’t heightened to the level it needs to be.”

“Hopefully, as a society and as a public we become more aware of the consequences of ingesting these,” said Krueger, the Orchard Park administrator. “As a school we first and foremost want to educate our students about making lifelong healthy choices.”

In the meantime, some parents are calling on schools to more closely monitor the bathrooms.