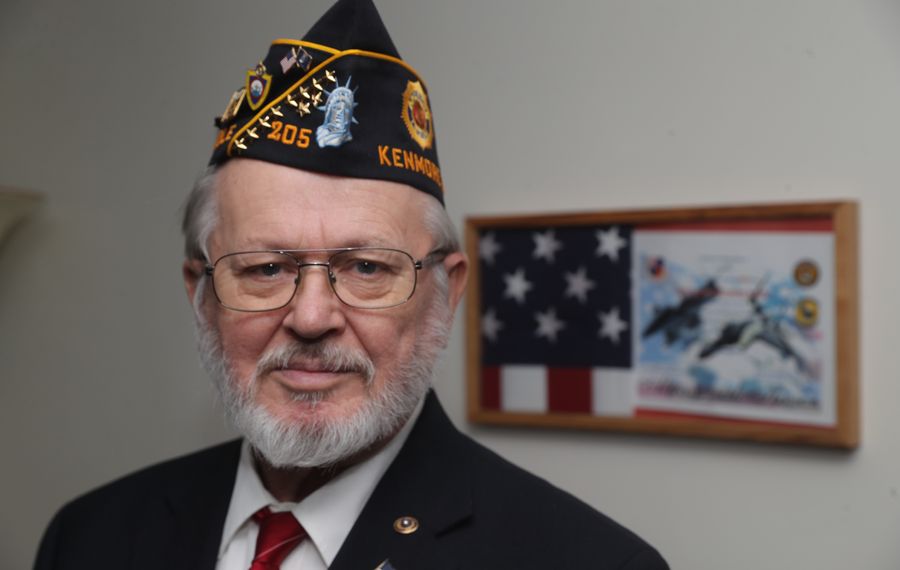 Wayne Baumgartner enlisted in the U.S. Air Force right out of Kenmore East High School and served his country for nearly eight years.

But he hasn't ever really stopped serving.

Baumgartner, who was a staff sergeant in the Air Force and Vietnam War veteran, has continued his work for the greater good in several capacities in his native Town of Tonawanda.

"We owe it to the country to serve," said Baumgartner, 75, who is the chairman of the Town of Tonawanda's Community Emergency Response Team and a longtime leader of the American Legion Milton J. Brounshidle Post 205 in Kenmore.

Baumgartner joined the Air Force out of high school in July 1961 and worked at the Niagara Falls Air Reserve Station. He joined with two high school friends who "didn't make it six months," he said. Baumgartner largely served as an administrative specialist, including a two-year tour in Germany. He reenlisted early at Niagara Falls in 1965. A year later he was sent to Vietnam.

"Vietnam was just building up around '64-'65, and I went in '66. I didn’t think they needed administrative people over there as much as fighting soldiers, so it was a surprise," Baumgartner said. "I was kind of excited in a way. I wasn’t looking for a way out, I wanted to experience it firsthand, and I don’t regret going."

Baumgartner was based at Tan Son Nhut Air Base, a Republic of Vietnam Air Force base near Saigon in South Vietnam. It was a major base for the U.S. Air Force during the Vietnam War.

His duties involved documenting plane and troop movements in and out of the country. There were 10 Air Force detachments in Vietnam, and each had to account for itself via monthly reports. Sometimes, a detachment wouldn't send their information to the base, and Baumgartner would travel around the country to retrieve the report.

One time that meant a trip to Tay Ninh, a base about 60 miles northwest of Saigon. He was transported on an Army Caribou cargo plane.

"The pilot told me he'd be there 20 minutes, so I told him I could probably run there and run back in five minutes," Baumgartner said. "I get to the building, and I hear them taking off. I was stranded overnight. There wasn't a plane until noon the next day."

There was only a four-person detachment at Tay Ninh. The group decided to head into town.

"We're driving along in our blue Air Force truck, and the side mirror gets shot out," Baumgartner said. "He kept driving like it was a daily thing. It didn't faze them at all, they said it happens all the time. All I had was a 30-caliber revolver with six rounds. That’s all they give you when you leave the base."

Baumgartner is proudest of his Air Force commendation medal, awarded to members of the Air Force who distinguish themselves by meritorious achievement and service.

Because he reenlisted early, his service amounted to less than eight years. He served seven years, seven months and seven days.

"I wouldn’t change it for the world," Baumgartner said of his military career. "Military people are a different breed. They have your back, all the time. It could be a stranger you don’t know, but if you need something, bingo, you’ve got it."

After his military service, Baumgartner worked two years as a steamfitter apprentice before working for J.C. Penney in the Boulevard Mall for 35 years, retiring as a maintenance stock manager. He and his wife of 57 years, Sandra, raised two daughters and three sons, including two who followed their father into public service: David, a recently retired Town of Tonawanda police captain, and Michael, the supervisor of the Town of Tonawanda's paramedics.

Throughout his post-military career and his retirement, Baumgartner has been active in the community. He is a 50-year member at Brounshidle Post, where he served as commander. He has been involved in post fundraisers, including efforts to provide Christmas gifts to needy veteran families.

As the chairman of the Town of Tonawanda's community emergency response team program, Baumgartner heads the initiative that has educated 500 residents about disaster preparedness and trains them in basic disaster response, including skills in fire safety, search and rescue and extrication. The program has 137 active members.

"We train people to take care of themselves, and each other," said Baumgartner, who also organizes the annual charity hockey game between the town's police and firemen.

Baumgartner's two paths of service came together this summer when he was honored by State Sen. Chris Jacobs as part of the Veteran of the Month program. He was told there would be a group picture during the event and to bring some of his formal military wear.

"We were having a legion family picnic, and I'm running it, making all of this food, and someone says change for the picture," he said. "I walk out there, the senator is there, my family and everyone. It was quite a surprise."