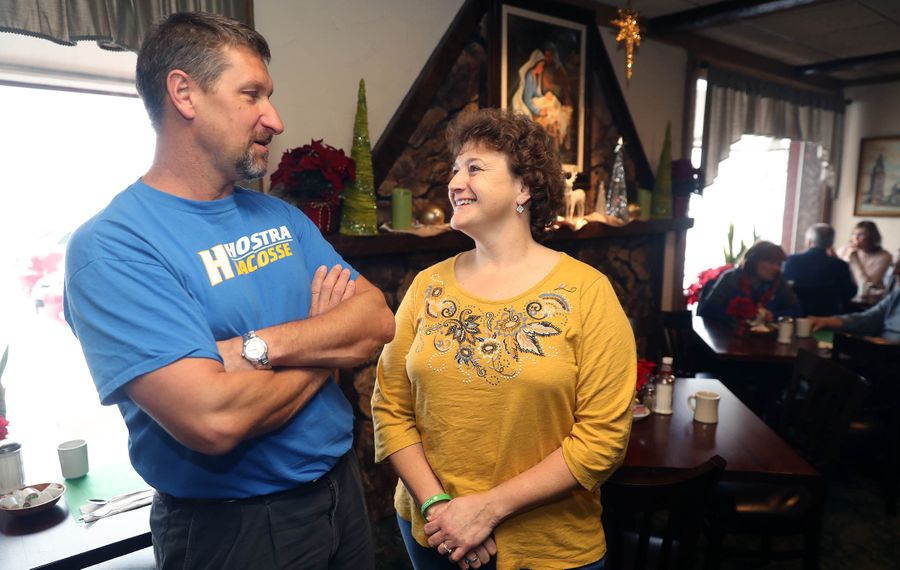 Dennis Braniecki drove in Sunday from greater Rochester. He grabbed breakfast with his sister, Debbie Sokolski, and her husband, Stephen, at the Polish Villa on Union Road. They talked about their jobs and especially about the engagement of Debbie's daughter, all the usual topics grown siblings cover when they get together.

It was a routine moment at a place they have loved since childhood, which is exactly why they see it as a means of thanks for the New Year.

Dennis and Debbie, who grew close as toddlers, never forget. It was 11 years ago, on another New Year's Day, that Debbie felt the first signs of what turned out to be leukemia. At the time, she and Dennis had not spoken to each other in almost 12 years, a family breach that seemed irreparable.

“What happened next,” Debbie said, “you can’t even make it up.”

It led to a routine she follows every year: She calls her siblings, each of them, on New Year's Day. While it is easy now, she and Dennis understand – if there is tension in a family – just how hard those phone calls can be.

Yet a simple call, they say, can serve as a pivot in life.

“I was given the opportunity to make right what went wrong,” Dennis said.

In Cheektowaga, he was the youngest of five Braniecki siblings. Debbie, now 50, was born one year earlier. She and her younger brother both fell in love with sports. They were especially close throughout childhood and high school, at John F. Kennedy.

Sean Kirst: A Western New York year, in the words of those who lived it

Dennis went on to play college football at the University of Rochester, while Debbie, closer to home, played basketball at Daemen College. In his 20s, Dennis settled in Ontario County. Debbie became an art teacher and a girls’ basketball coach at her old high school, JFK.

Their long connection abruptly fell apart. An argument began in the family over matters they would rather not discuss, except to say they were issues most families would understand. There were some hard words between Dennis and his parents, leading to a rift that caused Dennis and Debbie to stop talking for a long time. 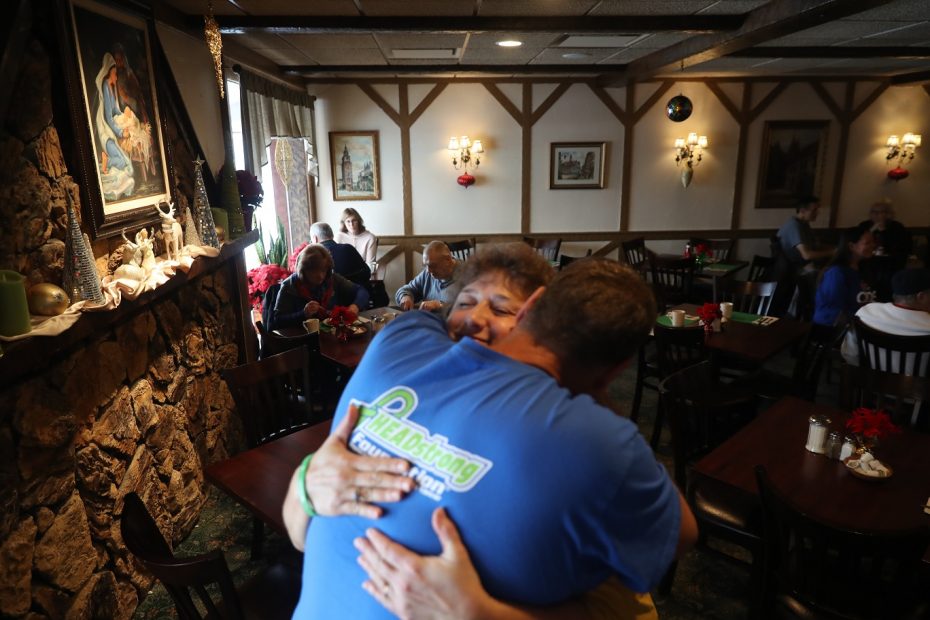 Debbie Sokolski of Elma, with her brother Dennis Braniecki of Canandaigua, at Polish Villa — where they used to come routinely with their parents. (John Hickey/Buffalo News))

They share that tale now with the understanding that many families go through similar pain. They had not spoken for more than a decade on New Year’s Day of 2008, when Debbie and Stephen and their kids, KC and Mathew, had a one-night getaway with some friends at a hotel with a pool in Amherst.

Debbie felt lousy. She had a sore throat and a splitting headache, and she stopped a day or two later at a local urgent care. The staff told her, most likely, she simply had a bug.

In that same month, Debbie had a chance to fly to Phoenix with her mother, Diana Braniecki, where the Buffalo Sabres were playing the Arizona Coyotes. Debbie felt so awful during the trip that she had trouble breathing. She came home and went to see her regular doctor, who later told her he guessed the truth the moment he saw her face.

Sean Kirst
Cuomo wants to make the state fair longer. But is that fair?
In a community celebration at Kleinhans, living proof of the hope of MLK
For all those seeking hope at Roswell, a toddler rings a bell
Back from the brink, Mark Croce's Statler goes on as living statement
More Stories

It was leukemia. Within a day, Debbie was at the Roswell Park Comprehensive Cancer Cancer, which essentially became her home for five months. She began chemotherapy, but Dr. Philip McCarthy, one of the doctors eventually involved with her treatment, said it was clear immediately that "her leukemia was not well-controlled."

She needed a transplant, McCarthy said, and a donor with marrow that would match.

You can guess who that donor was.

Debbie and Dennis both speak of their brother Daryle – named for one-time Bills quarterback Daryle Lamonica – as the guy who brought everything together, as the one with the courage to make that call that mattered most.

During the long family estrangement, their father, Phil Braniecki, died. For Dennis, the loss of his dad amid the feud remains the hardest part, a regret he hopes this tale will help others to avoid.

Nine years after Phil Braniecki's death, Daryle went to bed one night and dreamed he was in a funeral parlor and his father was there, very much alive. He led Daryle to a casket. Dennis was in it.

Daryle woke up, deeply shaken. He could not get the dream out of his mind. That morning, he called Dennis and left a message. His brother, later that day, called back.

“It was raw,” Daryle said, “but we restarted rebuilding the bridge.”

It turned out to be strong enough to save their sister’s life. 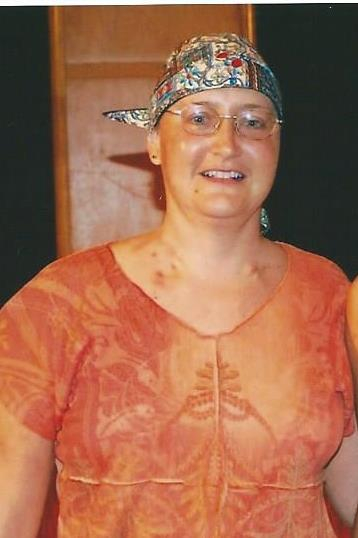 Debbie Sokolski in 2008, during her treatment for leukemia. (Family photo)

The two brothers began talking from time to time, unknown to the rest of the family. Daryle called again when Debbie learned she had leukemia. He told Dennis the doctors might need a marrow donor, and the best hope would be a sibling.

The next day, Dennis drove to see Debbie at Roswell. They both choke up in recalling that meeting. It was one of those February days when the Western New York sky is an aching blue. Dennis remembers how Debbie’s hair had fallen away, how she had a port in her chest, how her blue eyes stood out, mirroring the sky.

“I told her if there was something I could do, I’d be there in a second,” Dennis said. They tested his blood. He turned out to be the best possible match, McCarthy said.

Dennis and Debbie did not talk that much this week about what came next, about the nuts and bolts of the marrow transplant process. What they talked about is the way it all turned out.

That May, Debbie went home to Stephen and their children.

By the next New Year’s Day, she was in complete remission.

People sometimes ask Debbie, who went back to teaching years ago, if she feared death. “Dying was not an option,” she said. She had her kids at home, and she allowed herself to cry only once before she turned her mind to what she had to do.

Today, McCarthy and others at Roswell sometimes ask her to speak with patients working through the shock of finding out they have leukemia. Her presence, by itself, provides hope, and Debbie always offers one central piece of her own experience.

She tells them she focused entirely on succeeding at each step in the process, and in believing she would find a way to make it through. 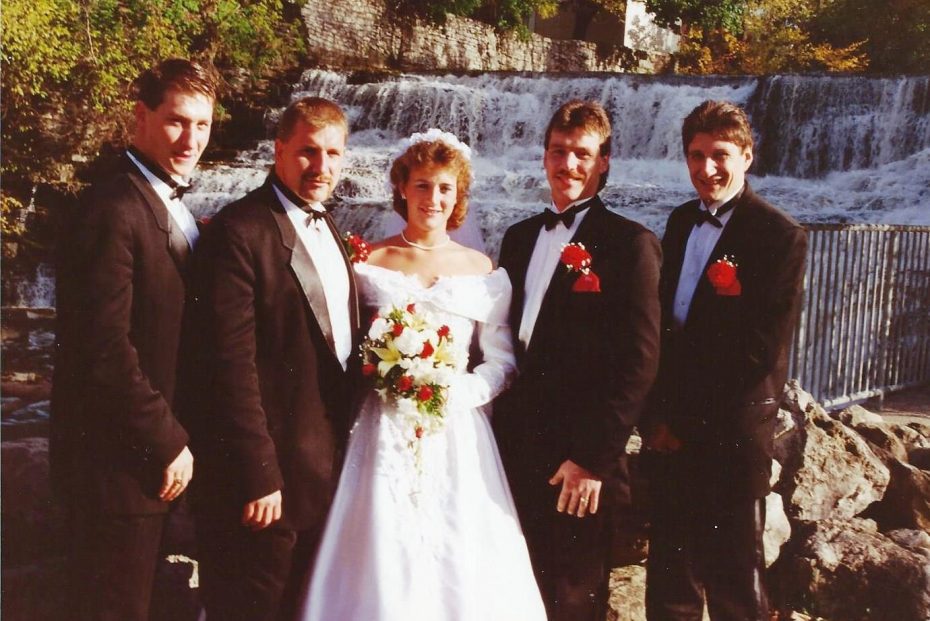 Ten years ago, she welcomed her first New Year’s as a patient in recovery. It was also the first time that Dennis brought his family, his children, to meet their cousins in Buffalo. Debbie recalls being overwhelmed with gratitude — for her brother, for her husband and kids, for the community that stepped in to embrace them while she was hospitalized.

“It’s a cliché, but every day feels like a miracle,” Debbie said. “I remember driving home from the hospital, and how beautiful and clear the sky looked after all that time inside, and I never forget. Fresh air is something I never take for granted.”

Dennis, too, sees larger meaning in Daryle’s dream, and he senses their father’s hand in his chance to help his sister. As for their mother, she died at 78 last June, and all five siblings were there to say farewell. It was hard, but for Dennis it only reinforced one holiday tradition.

He will be glad to hear his sister's voice, on New Year's Day.