When the year started, Robin Lehner was in a bad place. Both on the ice and off of it.

Now as the calendar wraps up on 2018, life is good for Lehner. So is hockey. And that was written in that order intentionally.

A lot of you booed Lehner during his three years with the Sabres. He probably deserved some of the catcalls. He didn't deserve others, as he often had a lousy team in front of him.

But there was real life at play Monday night. His eyes red and his lips quivering at times, Lehner struggled hard to keep his emotions in check after he made 39 saves and was the First Star in leading the New York Islanders to a 3-1 win over the slumping Sabres in KeyBank Center.

If you have a pulse, you have to feel good for the guy.

"This one felt good. It was a little weird. I don't really know how to put it," Lehner said. "It was probably the hardest game I've played in my career. I don't know why. It was a really weird feeling for me. I struggled mentally in the beginning of the game. It felt weird but our team got in the flow."

I can tell you why. There had to be sordid flashbacks. Lehner had not been in the building for a game in more than nine months. The last time he was here was March 29, his last game with the Sabres. It was a loss to Detroit and Lehner couldn't finish. With life and hockey crashing around him, he went into a panic attack in the second intermission and left the building before the game ended.

As he documented in a chilling first-person account in September in the Athletic, Lehner went home and did what he normally did: He got drunk. But this time was different. Lehner knew he had a problem. He woke up in the middle of the night and told his wife, Donya, he needed help. Suffering from bipolar disorder, Lehner entered a Phoenix treatment center for alcohol abuse.

This was far different than playing Ottawa, another old team, when he was with the Sabres. This was about conquering personal demons and taking another step in life.

"It's mixed emotions, really." Lehner said, the words becoming more difficult. "I really liked playing for this team. But everything that's happened has happened. It's been a tough time. It's been tough."

"We're playing really good as a team," Lehner said. "We're all battling hard, keeping with the detail. Everyone is giving 100 percent every shift. It rewards you, gives you karma and bounces and gives confidence in all of us."

Forgive the personal intrusion here for a moment. Lehner was one of the most fascinating characters ever to occupy the Sabres dressing room. We talked a lot after practices and gameday skates, usually on the road, and there were times when I got the death stare that most of you have seen on social media.

Imagine getting it from a few inches away. We had one particularly pointed chat one day in Denver when Lehner didn't like a couple of paragraphs (which may have involved breakaways or shootouts). "You hold us accountable, so I'm going to hold you accountable," he said sternly. Point taken. But by the end, we were laughing again. He understood I was part of his gig when it came to hockey. 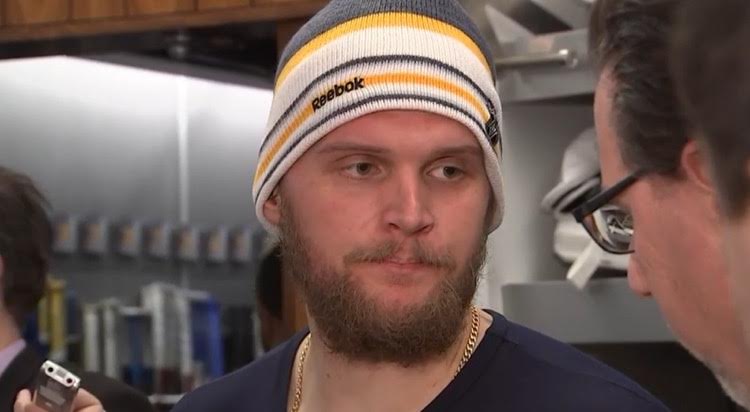 When Lehner's problems surfaced publicly, I've long regretted that we spent so much time talking about hockey and the media. Not much about families, kids or life in general. He probably could have used some other topics at times.

I saw Lehner in Oshawa in September, prior to the last preseason game. Clean-shaven, hair cropped like Lamoriello demands. Looking thinner. He was hopeful but you didn't know how things would go.

We saw a lot more Monday. It looks like things are taking off again for him.

"I get some of the biggest satisfaction of coaching when I've had players who've had situations that put them in a bad place and they've gotten their life turned around," said Islanders coach Barry Trotz. "I still text some of those players. I'm so proud of them.

"I know how difficult it can be for players who have to make life changes. If they don't, they die. It ruins their life. That's what it is. So I'm really proud. ... When you get the player in a good place, the player can have success but more important he can have a real productive life and that's why I'm real proud of Robin. From the situation he was in to where he is now, it's a game-changer not only for him but for us."

There wasn't much reaction to Lehner's return Monday. There were a few boos when he was announced in the starting lineup, and some polite applause over scattered boos when the Sabres jammed in a quick welcome back graphic on the jumbtron with a public address announcement prior to a first-period faceoff.

Lehner said he was happy to get a chance to play again in Buffalo, even with all the hard times. He said he was amazed how the rink was full almost every night, even though the Sabres lost a lot in his three years here.

"They deserve the success that's happening this year," Lehner said of the fans. "I'm working every day to be a better person. That's my new journey and I'm just happy to come to a team with a really really good organization that's been supporting me a lot off the ice and on the ice. I couldn't be happier."

Lehner has battled a couple of nagging injuries thus far this season and the Islanders have been battling inconsistency. But the team is rolling and Lehner seems to be claiming the No. 1 job over Thomas Greiss. The Isles are 8-2-1 in their last 11 games and suddenly just two points behind the Sabres.

Who needs John Tavares? This team doesn't. But there's no question Robin Lehner needs hockey. He's again finding his niche in the NHL.

"When everything got exposed, there was a lot of outreach from the Sabres which was nice," Lehner said. "It's been different for me. I've been shielding myself away. I'm trying to focus on my stuff, my career, my recovery and my life. So it's been total focus on me and my wife, my two kids and showing up for work every day."