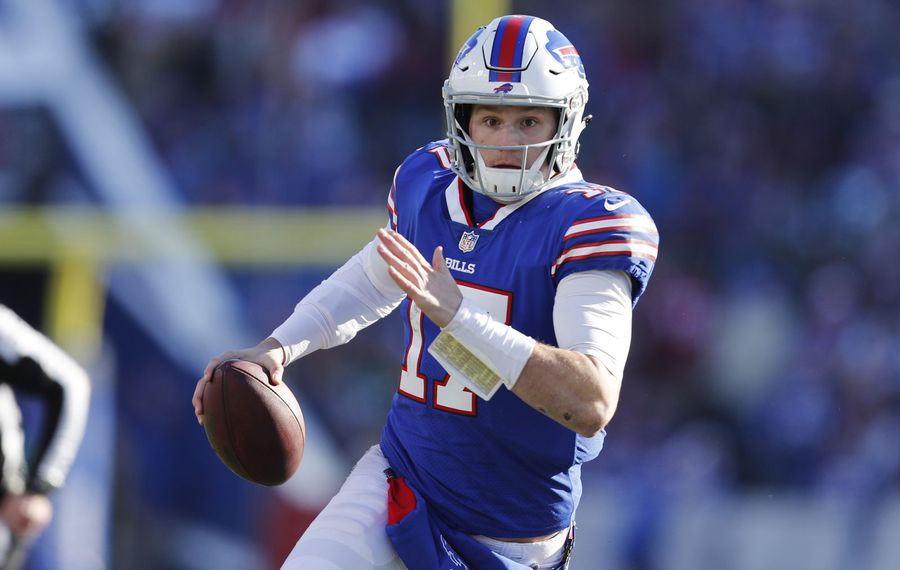 Micah Hyde is dreading training camp for one reason.

The Buffalo Bills’ safety will have to go up against Josh Allen every day.

“He's going to be a totally different player,” Hyde said. “He's going to be obviously better than what he was finishing the season. From the year-one-to-year-two gap, I'm really excited to see what he's able to do.”

Hyde’s excitement is shared throughout One Bills Drive. Undoubtedly, Allen’s five-touchdown performance Sunday in the season finale against Miami will provide plenty of positive vibes as the Bills head into the offseason.

“It was my goal to learn and grow as much as possible,” Allen said Monday, as the Bills cleaned out their lockers and headed for home. “I thought I did a pretty good job with that, being on the field with this team, learning from the coaches that I’ve learned from and the guys that have been in the quarterback room with me. I think I’ve grown a tremendous amount.”

Allen went 5-5 in the 10 games he started as a rookie. He finished 169 of 320 (52.8 completion percentage) for 2,074 yards, 10 touchdowns and 12 interceptions. He also set a franchise record for rushing yards by a quarterback, finishing with 631 yards and eight touchdowns on 89 carries.

“I’ve learned about kind of a different side of football, the preparation in which it takes,” Allen said. “The game in the NFL is a lot different. It’s extremely tough. No win is given, it’s all earned. That’s something that I can look back on and say that this is kind of how my rookie year went. It wasn’t great, it wasn’t terrible, but I did enjoy it and I love the game of football.”

It wasn’t without its low points. It’s easy to forget – mainly because people want to forget the Nathan Peterman experience – but Allen was not the starter at the beginning of the season. Of course, that lasted for all of one half.

“I was proud of Josh. At the end of the day, I didn’t really draw up what I thought it would look like,” General Manager Brandon Beane said. “I really didn’t know from the day we drafted him into training camp how much he would play, if any. We tried not to force it, we tried to let it come naturally. Obviously, it came even earlier than we expected, but I was thrilled with what Josh did.

“At the same time, I'm aware of the things that he needs to fix and continue to improve on. That’s the great thing about Josh – you can have candid conversations with him about what he’s doing well and what he’s got to get better. … He continued to get more comfortable as the year goes on. But he’s got a lot of work to do and we’ve got a lot of work to do before we get back in 2019.”

Allen’s rookie season was interrupted by an elbow injury that caused him to miss four games. Beane confirmed Monday that injury has totally healed, and should not have any impact on his offseason. The injury did have a silver lining in that Allen was able to watch the game from the sidelines for a few weeks.

“There’s nothing like in-game experience, there’s nothing like in-game reps,” he said. “You can’t fake gamelike reps. It’s the only thing you can get being in the game. Every experience, every defense, every game has its own different elements to it. In turn, taking those elements and running with it, learning from them and allowing yourself to use them next time in that situation may arise. Sometimes, the situation may never arise again, but just having those situations and learning from those and kind of going through that is going to help any player in the long run.”

The Bills’ offense showed significant signs of improvement following the team’s Week 11 bye, averaging 22 points per game. That came after they averaged 13.7 in the team’s first 10 games.

“I definitely think as the year went on, we improved,” Allen said. “I think we kind of found ourselves and who we are in the last six, seven games. Coach brought up some analytical points with us and I’ll keep those in house, but it’s pretty promising and exciting to think about what we could’ve done and what we can do and what’s in the future. I’m extremely excited to have the guys that we have. I’m looking forward to growing with these guys and going into next season with some momentum now and trying to continue to improve.”

Allen hasn’t formalized an offseason plan as of yet. He’ll go back to his native California, and might resume his workouts with quarterbacks coach Jordan Palmer. He also might hook up for workouts, and the occasional round of golf, with backup Matt Barkley.

“Just being down and spending time with family, friends, getting the mind away from football a little bit, letting the body recover, and then as soon as February comes around, start getting back to it and working out and getting back into shape so we can come back April 15 and be ready to go,” Allen said. “I’m pleased with the progress for sure. There’s still a lot of improvement to go. I want to be better. I want to be as best as I can be and that’s putting in the work and taking as many reps as possible, drill work in the offseason, throwing with our guys and just trying to get back in that mindset of being in the gamelike situations.”