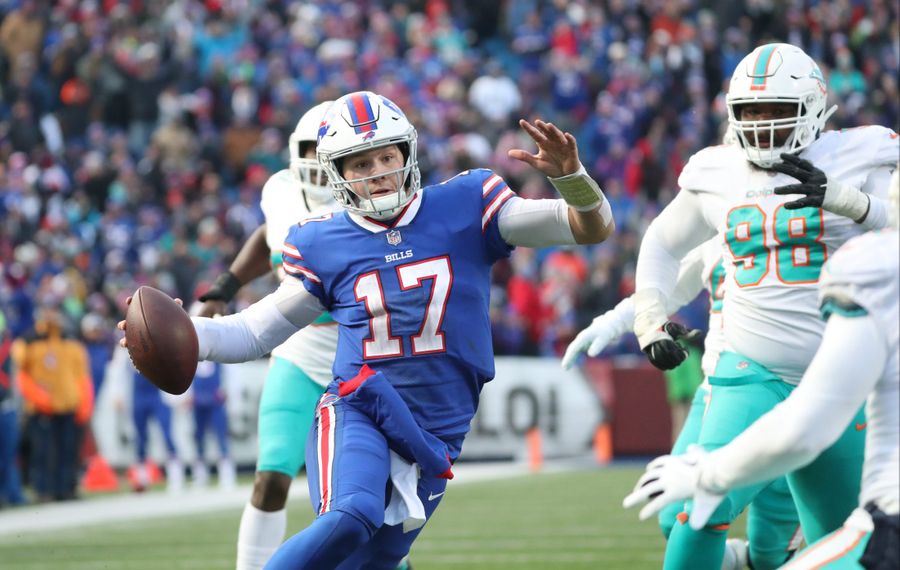 Josh Allen made much better use of his ability to throw deep the last six weeks of the season.

Allen was 2 of 2 for 46 yards and a touchdown on passes 20 or more yards past the line of scrimmage in the season-ending victory over Miami.

For the season, Allen led all NFL starting quarterbacks in the percentage of passes he threw deep, according to Pro Football Focus.

The good news is Allen got a lot more productive throwing downfield after the Bills committed to a younger, faster receiving corps.

In the first six games, Allen was 6 of 23 for 201 yards with one TD and six interceptions when throwing 20-plus yards downfield.

After coming back from an elbow injury for the last six games, Allen was 12 of 40 for 379 yards with six TDs and four INTs.

Allen ranked 22nd in yards on deep passes at 533, however, he had the second-fewest pass attempts of any starting QB who played at least nine games, ahead of only Miami’s Ryan Tannehill.

Here are the position grades for the Miami game, based on video review and on a scale of 1 to 5:

Quarterback (3.5): Allen again put his athleticism on display in rushing for 95 yards, starting when he fell down in the pocket, got up and scrambled for 12 yards. He had off-target misses to wide open receivers Zay Jones and Jason Croom in the third quarter. But he had enough accurate throws to allow Bills fans to dream about his potential in the offseason.

“Josh to Robert Foster on a back shoulder,” said Sean McDermott, referring to the 5-yard TD pass. “It’s a tough route to throw and get on the same page with for two young players, two rookies to connect. I thought it was big.”

With a depleted secondary, the Dolphins opted to blitz on 16 of 31 drop-backs. Allen killed them. He rushed three times for 91 yards against the blitz and hit 8 of 13 passes for 134 yards and two TDs.

Receivers (3.0): Jones had his most productive day of the year in catches (six), yards (93) and TDs (two). Charles Clay played 29 of 61 snaps and was not targeted. Croom showed his short-area quickness by taking a pivot-route catch for 26 yards.

Running back (2.5): Miami’s linebackers play downhill fast against the run, which exposes them to play-action. But their aggressiveness and eight-man boxes helped stuff the run. On first down, Bills backs carried 12 times for just 28 yards. LeSean McCoy did it all on his own on a 9-yard run early and a 9-yard swing pass. The big credit goes to Chris Ivory for his pass protection. He picked up the blitz on a 21-yard pass to Jones and on Allen’s 30-yard TD run. He also had the 46-yard catch and run early. The Bills used a “regular” two-back set on 30 plays, the most this season and more than in the previous eight games combined. Nice to see Patrick DiMarco get 36 snaps overall. The Bills need better interior line play to take more advantage of DiMarco’s blocking skills.

Offensive line (2.5): Left tackle Dion Dawkins finished a tough sophomore season on an upswing. He was good in pass protection, giving up only one hurry. He rode Robert Quinn wide on Allen’s 35-yard scramble. Center Ryan Groy got blown up at the point of attack by Davon Godchaux on an early run stuff. But Groy picked up the blitz early and was better in pass protection. He and Wyatt Teller got good push on the fourth-and-1 conversion run by Allen. Right tackle Jordan Mills had some trouble in run blocking but was OK against Cameron Wake. Conor McDermott played 18 snaps in place of Mills after the ejection play.

Defensive line (3.5): In his final game, Kyle Williams blew up a trap block by guard Jesse Davis to make a tackle for loss and stood up guard Ted Larsen to create a run stuff. That was in the first quarter. He had two other tackles and a hurry and caught a pass while playing 38 snaps (two on offense). Shaq Lawson played his best game of the year, getting two sacks, one up the middle and one while overwhelming tight end Nick O’Leary. Lawson set the edge well again. Jerry Hughes played a solid game against Laremy Tunsil, who is a quality left tackle. Hughes whipped O’Leary for a sack, dropped into Tannehill’s passing lane to help Lawson get a sack, had a hurry and drew a hold on Tunsil. Harrison Phillips had had a tough time again against double-team blocks. He was on the ground on a 16-yard run and got knocked back off balance a couple others.

Lawson called his second sack (vs. O’Leary) before the play, according to defensive line coach Bob Babich.

“It was a matchup; I just took advantage of it,” Lawson said. “I was happy with the first sack but I needed two. Teams pay attention to how you play at the end of the year. I just wanted to give them something to show off for the new year. I feel like I did that.”

Linebackers (4.0): Tremaine Edmunds’ season-ending performance was almost as impressive as that of Josh Allen. Edmunds actually sacked both Ryan Tannehill and Kenyan Drake, who was trying to block the linebacker, in the fourth quarter. Edmunds took both of them to the ground. He showed off his 83-inch wingspan and athleticism on his first-quarter interception. An assist on that goes to Lorenzo Alexander, who covered intended receiver Danny Amendola on the shallow cross. Edmunds also had two run stuffs among his 12 tackles. Alexander continues to show good closing speed. He had five tackles, giving him 68 on the season. (He had 65 and 64 the previous two seasons). And Alexander played all 61 snaps. Alexander played 62 percent of the defensive snaps this season. He played 61 percent last year. As the saying goes: I’ll have what he’s drinking.

Defensive backs (4.0): Tre White showed his short-area closing ability on his interception. Levi Wallace had blanket coverage when he was tested deep early and again played tougher than his size on the edge against the run. In starting the last seven games, Wallace was slightly better than Philip Gaines. Micah Hyde and Jordan Poyer closed out super seasons at safety. Hyde prevented a TD with a pass breakup on the goal line. Poyer prevented an 8-yard Kenyan Drake run from being a 25-yard gain with a sure tackle on the second level. He finished eighth among NFL safeties in tackles.

Special teams (1.5): One of the poorest Bills punting seasons in a long time ended as Matt Darr hit poor balls on 2 of 3 kicks (2.93 and 3.14 hang times). Siran Neal had excellent coverage on both. Stephen Hauschka refused to make any excuse but he obviously was not right since injuring his hip.