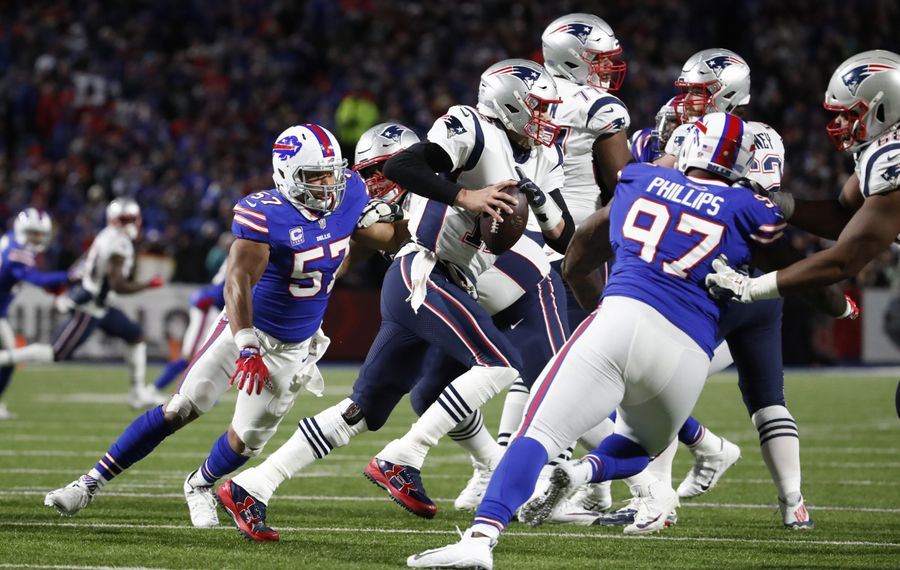 Defensive tackle Jordan Phillips only has spent 12 weeks with the Buffalo Bills.

Yet the fans and the team have made a big impression on the four-year veteran. Phillips, whose contract is up, said he hopes he stays in Buffalo.

“We’ve already been in negotiations,” Phillips said Monday. “We’ve been keeping it under wraps. The word on the street is the Bills are looking for a new 3-technique, and I think I’m the best candidate. So we’ll see.”

The 6-foot-6, 341-pounder was claimed by the Bills after being waived by Miami on Oct. 3. He averaged 24 snaps over the next 11 games and was a quality backup at both defensive tackle spots.

The Bills have a big hole on the defensive line with the retirement of Kyle Williams, who plays the 3-technique spot over the outside shoulder of a guard. Phillips is more advanced at this stage of his career than rookie Harrison Phillips, who also averaged 24 snaps a game.

“Buffalo’s great. I love the atmosphere,” Phillips said. “Wherever I wind up, I won’t go anywhere with a bad fan base. The fan base is a big part of my game, and I haven’t seen anything better than the Bills Mafia.”

“Early in my career I jumped offsides a lot,” Phillips said. “You don’t have to worry about that stuff in Buffalo because it’s so loud you don’t get any hard counts. It helps. It energizes players. Once you get the crowd into it, the other team starts feeling it. We start feeling it. It’s just a huge momentum shift.”

Phillips also likes the idea of playing with a good defensive cast.

“No. 2, that speaks for itself,” Phillips said, referring to the Bills’ defensive yardage ranking. “What else can you say? Why wouldn’t you want to be here? We’re young. We’ve got a lot of talent. We’ve got a lot of guys who love to play ball. Buffalo is the place to be.”

“When I first came in, it was the Tennessee game and you don’t really get respect in this league until you earn it,” Phillips said. “In that game I showed everybody what I can do. I haven’t had a fall-off since. Your game speaks for itself. I felt I did what I needed to do to accomplish what I need to accomplish here. Hopefully the extension works out.”

Phillips also reiterated the fact he’s far happier in Buffalo than he was in Miami, where he spent the previous three seasons. Phillips tweeted out “YES” with “laughing until crying” emojis Monday morning after the news broke that the Dolphins fired coach Adam Gase.

“That happened today? Oh, I didn’t even know it,” Phillips deadpanned.