Every year, I pick one full Buffalo Bills game to assess the performance of the radio team of play-by-play man John Murphy and analyst Mark Kelso.

I picked the right game Sunday to hear them go a little crazy during the Bills’ 42-17 victory over the Miami Dolphins.

Kelso actually drives me crazy with his non-stop talking in between plays about the previous play. The former Buffalo Bill obviously knows the game, coverages and schemes, but he apparently thinks he gets paid by the word.

I’m only slightly exaggerating in guessing that Kelso said more words during Sunday’s game than all the analysts who worked the previous 15 games combined.

By the second half, my head hurt so much that I tried to tune out Kelso’s very technical analysis as much as possible.

Kelso would be a much better analyst if he looked up the word “succinct,” followed the definition and got less technical. Kelso should learn to get in and out of his analysis in a few seconds like Murphy did when he was the analyst alongside play-by-play man Van Miller.

In short, Murphy needs an analyst who is more like he used to be.

Kelso’s conservative approach to the game also drives me a little crazy.

Near the end of the first half, Kelso suggested the Bills run out the clock in the final two minutes before Josh Allen threw a pick six that tied the game 14-14. 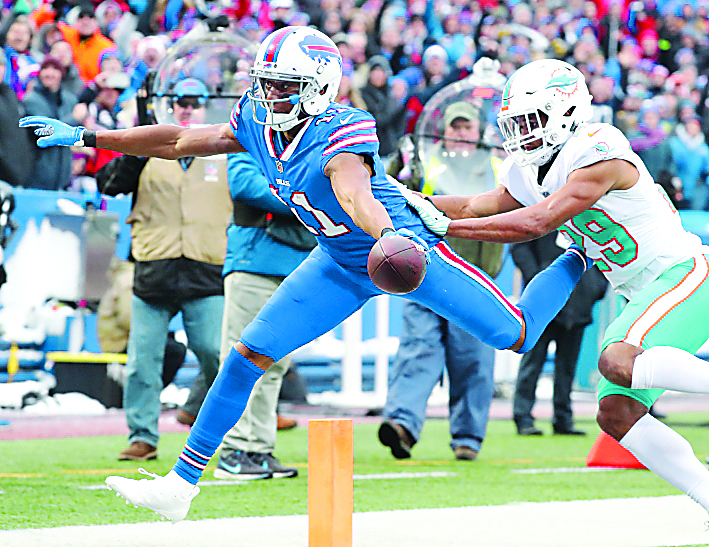 Zay Jones reaches for the pylon to score a touchdown Sunday against the Miami Dolphins. (James P. McCoy/Buffalo News)

He was especially critical of having Allen throw the ball in the middle of the field. The result validated the opinion, but the Bills were 5-10 when the game started and it was nice to see the coaches trust Allen to throw in that situation even if it turned out to be a disaster.

Similarly, Kelso thought the Bills should have kicked a field goal in the second half before Coach Sean McDermott decided to go for it and Allen made it on fourth and two yards to go.

Alan Pergament
Here's what we can tell you about NPR's 'Wait, Wait,' coming to Buffalo
From the Oscars to the White House, check out these Buffalo TV angles
How Carolyn Cassidy went from a kid in Buffalo to head of 20th Century Fox TV
A historic discussion with Doris Kearns Goodwin
More Stories

Did I mention the Bills were 5-10 going into the game?

On the first late hit, Kelso said "too many times he comes up with late hits. He needs to stop doing it."

Kelso really blew up the second time Alonso hit Allen late with his leg. To Kelso's credit, I’ve never heard him or any analyst for that matter become more passionate about a safety issue.

“That is bull ... ” said Kelso, adding a syllable that rhymes with "flap" to that word. “Get him out of here. It is ridiculous. He needs to be taught a lesson. That was bull ... I’m ready to go down there.”

Kelso gets points for passion, even if it was a little over-the-top.

“Somebody, go get him some decaf,” replied Murphy.

Murphy could have used a little coffee himself on a couple of LeSean McCoy runs in which he sounded as excited as McCoy’s agent.

I wasn’t 100 percent sure Murphy said it until he apologized if he offended anyone.

Murphy has a terrific voice and gets paid to be excited even when the team is 6-10. He was most excited calling Allen’s 30-yard touchdown run. “It was spectacular, it was amazing,” said Murphy.

He does a very good job on all aspects of play-by-play, especially asking the right questions of Kelso and sideline reporter Sal Capaccio.

For instance, he asked Kelso for his opinion on how good the Bills defense is and he asked Capaccio if the wind was a factor when Stephen Hauschka came up short on a 43-yard field goal attempt.

But I almost dread Murphy asking Kelso questions because I know the answer is going to take 40 seconds. And that isn’t bull.

Murphy also comes from the Van Miller school of broadcasting in that he asks the audience questions like “is he in?” when people can’t see if players score touchdowns since they are listening on radio. He also asked “what is that all about?” before realizing the commotion was over Alonso’s first late hit.

Weather Report: Capaccio told listeners before the game that “this is the kind of weather you hope for." Murphy and Kelso had an entertaining exchange that started when Murphy said training camp in Rochester “will be here before we know it. I miss those summer days.” When Kelso noted winter hasn’t been bad so far, Murphy noted "there are four and a half more months of winter to go.”

Sal Speaks: I’d like to hear less of Kelso and more of Capaccio on the sideline. He was most informative when he noted the Bills bench was upset on the first late hit on Allen by Alonso and when he said McDermott ran down the sideline to prevent his players from going on the field after Alonso’s second late hit on Allen.

Thank Heaven for Twitter: I was out of town and was only able to listen to the game via a stream on the NFL’s Game Pass. The stream was several seconds behind Twitter, which meant I could read what happened on the social network before I heard it on Game Pass. I could also see some of the controversial plays that were posted on Twitter, including Alonso's late hits.

Thank Heaven for the Crowd: You could tell if good things were happening for the Bills a second or so before Murphy confirmed it by hearing the crowd noise from New Era Field.

The Great Debate: Murphy and Kelso disagreed on whether the officials should have blown the whistle dead before Allen was called for grounding. “I don’t want an early whistle on Josh Allen,” said Murphy. “He’s a big, strong man.” “Blow the damn whistle,” said Kelso, who seemed more worried about the quarterback’s health.

The announcers didn't need to debate the performances of Allen, defensive end Shaq Lawson and linebacker Tremaine Edmunds. They agreed they all played strong games.

The Summation: Kelso mentioned several times during the game that several of Allen’s passes were inaccurate, but all was forgiven by game’s end. After all, Allen was part of five touchdowns, leading Murphy to proclaim: “We have a quarterback here in Buffalo.” I hope Kelso heard that and realized that more can be said in a few words than in one hundred words.